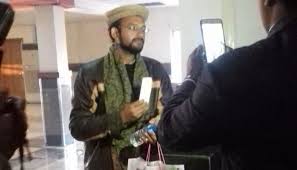 LAHORE: Pakistan on Tuesday has handed over the Indian spy Hamid Nehal Ansari upon the end of his sentence for the involvement in anti-state activities and forging documents.

Indian national Ansari, who had apparently been found to have illegally entered Pakistan and was involved in crimes like forging documents, is being released upon completion of his sentence and is being repatriated to India.

Ansari was tried by a military court which awarded him a three year prison term after he was arrested by security agencies from a hotel in Kohat in 2012.

He had entered Pakistan via Afghanistan without travel documents and with a fake ID card bearing the name Hamza. He travelled to Afghanistan from India on a tourist visa and then went to Jalalabad to enter Pakistan. His whereabouts were unknown to his family members for almost three years.