How US billionaires are fuelling the hard-right cause in Britain 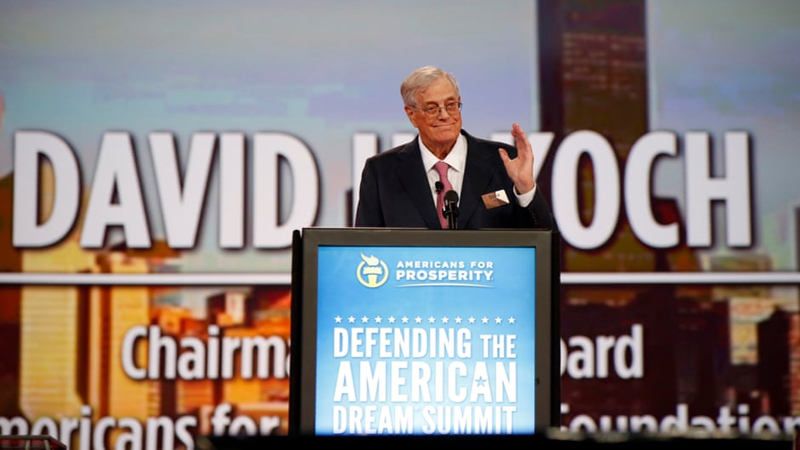 Dark money is among the greatest current threats to democracy. It means money spent below the public radar, that seeks to change political outcomes. It enables very rich people and corporations to influence politics without showing their hands.

Among the world’s biggest political spenders are Charles and David Koch, co-owners of Koch Industries, a vast private conglomerate of oil pipelines and refineries, chemicals, timber and paper companies, commodity trading firms and cattle ranches. If their two fortunes were rolled into one, Charles David Koch, with $120bn, would be the richest man on Earth.

In a rare public statement, in an essay published in 1978, Charles Koch explained his objective. “Our movement must destroy the prevalent statist paradigm.” As Jane Mayer records in her book Dark Money, the Kochs’ ideology – lower taxes and looser regulations – and their business interests “dovetailed so seamlessly it was difficult to distinguish one from the other”. Over the years, she notes, “the company developed a stunning record of corporate malfeasance”. Koch Industries paid massive fines for oil spills, illegal benzene emissions and ammonia pollution. In 1999, a jury found that Koch Industries had knowingly used a corroded pipeline to carry butane, which caused an explosion in which two people died. Company Town, a film released last year, tells the story of local people’s long fight against pollution from a huge paper mill owned by the Koch brothers.

The Kochs’ chief political lieutenant, Richard Fink, developed what he called a three-stage model of social change. Universities would produce “the intellectual raw materials”. Thinktanks would transform them into “a more practical or usable form”. Then “citizen activist” groups would “press for the implementation of policy change”. To these ends the Kochs set up bodies in all three categories themselves, such as the Mercatus Center at George Mason University, the Cato Institute and the “citizens’ group” Americans for Prosperity. But for the most part they funded existing organisations that met their criteria. They have poured hundreds of millions of dollars into a network of academic departments, thinktanks, journals and movements. And they appear to have been remarkably successful.

As researchers at Harvard and Columbia universities have found, Americans for Prosperity alone now rivals the Republican party in terms of size, staffing and organisational capacity. It has pulled “the Republican party to the far right on economic, tax and regulatory issues”. It was crucial to the success of the Tea Party movement, the ousting of Democrats from Congress, and the staffing of Trump’s transition team. The Koch network has helped secure massive tax cuts, the smashing of trade unions and the dismantling of environmental legislation.

But their hands, for the most part, remain invisible. A Republican consultant who has worked for Charles and David Koch told Mayer that “to call them under the radar is an understatement. They are underground.”

Until now, there has been no evidence that Charles and David Koch have funded organisations based in the UK. But a few weeks ago, a reader pointed me to one line he found in a form submitted to the US government by the Charles Koch Foundation, which showed money transferred to a company that appears to be the US funding arm of a UK organisation. Once I had grasped its significance, I set up a collaboration with the investigative group DeSmog UK. We could scarcely believe what we were seeing.

The organisation the Charles Koch Foundation has chosen to fund is at first sight astounding: a US organisation established by an obscure UK-based magazine run by former members of a tiny Trotskyite splinter group. Some of its core contributors still describe themselves as Marxists or Bolsheviks. But the harder you look at it, the more sense the Koch donations appear to make. The name of the magazine is Spiked. It emerged from a group with a comical history of left factionalism. In 1974, the International Socialists split after a dispute over arithmetic in Volume 3 of Das Kapital. One of the new factions formed the Revolutionary Communist Group. In 1976 it split again, and one of the splinters formed the Revolutionary Communist Tendency. It was led by a sociologist at the University of Kent called Frank Furedi. In 1981 it changed its name to the Revolutionary Communist party.

In 1988, the party launched a magazine called Living Marxism (later LM). By then, it had abandoned many of its former convictions. Among the few discernible traces of its revolutionary past was an enthusiasm for former communists in the Balkans, such as Slobodan Miloševi?. In 2000, it closed after losing a libel case: it falsely claimed that ITN had fabricated evidence of Serb atrocities against Bosnian Muslims. But as soon as the magazine folded, a network of new groups, with the same cast of characters – Furedi, Claire Fox, Mick Hume, Brendan O’Neill, James Heartfield, Michael Fitzpatrick, James Woudhuysen – sprang up to replace it. Among these organisations were the Institute of Ideas, the Academy of Ideas, the Manifesto Club and a new magazine, Spiked. It had the same editor as LM (Hume) and most of the same contributors.

We found three payments over the past two years from the Charles Koch Foundation. They amount to $170,000 (£130,000), earmarked for “general operating support”. The payments were made to Spiked US Inc. On Spiked’s donations page is a button that says “In the US? Donate here”. It takes you to the PayPal link for “Spiked US, Inc”. Spiked US, in other words, appears to be its US funding arm. Beyond a postal address in Hoboken, New Jersey, it is hard to see what presence Spiked has in the US. It appears to have been established in 2016, the year in which the Koch donations began.

When I asked Spiked what the money was for and whether there had been any other payments, its managing editor, Viv Regan, told me that the Charles Koch Foundation has now given Spiked US Inc a total of $300,000, “to produce public debates in the US about free speech, as part of its charitable activities”. She claims the foundation supports projects “on both the left and the right”. The Koch Foundation has funded “a free speech-oriented programme of public debates on campus titled the Unsafe Space Tour” and four live events, the first of which is titled “Should we be free to hate?” She told me: “We’re very proud of our work on free speech and tolerance, and we are proud to be part of the programme.”

But I have been unable to find any public acknowledgement of this funding. Neither on the videos of the debates, in the posters advertising themnor in reports of the events in Spiked magazine is there any mention of the Charles Koch Foundation. From what I could see of the title slides in the videos, they acknowledged an organisation called the Institute For Humane Studies, but not the foundation. Spiked has yet to reply to my questions on this matter.

The Koch brothers are famously careful with their money. According to Mayer, they exert “unusually tight personal control over their philanthropic endeavours”. David Koch told a sympathetic journalist: “If we’re going to give a lot of money, we’ll make darn sure they spend it in a way that goes along with our intent. And if they make a wrong turn and start doing things we don’t agree with, we withdraw funding.” So what might have attracted them to this obscure organisation?

Spiked magazine, edited by O’Neill, appears to hate leftwing politics. It inveighs against the welfare state, against regulation, the Occupy movement, anti-capitalists, Jeremy Corbyn, George Soros, #MeToo, “black privilege” and Black Lives Matter. It does so in the name of the “ordinary people”, whom, it claims, are oppressed by the “anti-Trump and anti-Brexit cultural elites”, “feministic elites”, “green elites” and “cosmopolitan politicians”.

Its articles repeatedly defend figures on the hard right or far right: Katie Hopkins, Nigel Farage, Alex Jones, the Democratic Football Lads’ Alliance, Tommy Robinson, Toby Young, Arron Banks, Viktor Orbán. They are portrayed as victims of “McCarthyites” trying to suppress free speech. It demands the hardest of possible Brexits, insisting that “No deal is nothing to fear”, as it would allow the UK to scrap EU regulations. But what it appears to hate most is environmentalism. It rails against “climate scaremongering”, and has called for fracking and coal production to be ramped up. It blamed the Grenfell Tower disaster on “the moral fervour of the climate change campaign”. It mocks the idea that air pollution is dangerous and has proposed abolishing the planning system. “We need to conquer nature, not bow to it,” it contends. “Let’s make the ‘human footprint’ even bigger.”

Spiked’s writers rage against exposures of dark money. It calls the Observer’s Carole Cadwalladr, who has won a string of prizes for exposing the opaque spending surrounding the Brexit vote, “the closest thing the mainstream British media has to an out-and-out conspiracy theorist”. It carries numerous articles by people from the obscurely funded Institute of Economic Affairsand from the Cato Institute. Its editor also writes for Reason magazine, owned by the Reason Foundation, which has received $1m from the Charles Koch Foundation over the past two years. Bizarrely, Spiked still uses Leon Trotsky to justify its positions. It claims to have built its philosophy on his objective of “increasing the power of man over nature and … the abolition of the power of man over man”. This means, it says, that “we should fight for greater human dominion over the natural world”, and that regulatory power should not be used to prevent anyone from exercising their agency. The result appears to turn Trotsky’s objective on its head: without constraint, those with the greatest agency can exercise uninhibited power over others.

Its enthusiasm for Trotsky is highly selective. As one of Spiked’s writers noted in 2002, his central message was that “the retreat behind national boundaries is a recipe for reaction”. Yet the magazine’s defence of both Brexit and Orbán, Hungary’s rightwing prime minister, is founded on the notion of national sovereignty. Spiked seems to have remembered everything Trotsky wrote that could be recruited to the cause of corporate capital and the hard right, and forgotten all his, shall we say, less enthusiastic musings about those forces.

Above all, its positions are justified with the claim to support free speech. But the freedom all seems to tend in one direction: freedom to lambast vulnerable people. The Unsafe Space tour that the Charles Koch Foundation financed was heavily slanted towards this line. Yet, when I exercised my freedom of speech in sending my questions to Spiked, I was denounced on the front page of the magazine as a “McCarthyite”. This is its favourite insult, which it uses prolifically to dismiss legitimate inquiries and critiques. The usual term for asking awkward questions about powerful interests is journalism. Isn’t open information and transparency a crucial component of free speech? Spiked has also called for schools, universities and governments to be “cleansed” of “the malign influence” of green NGOs, which it denounces as “the environmentalist enemy within”. Some friends of free speech, these.

The Kochs are mentioned in several Spiked articles, but no corresponding interests are declared. An article in 2016, when Spiked US received $170,000 from the Charles Koch Foundation, attacked the Standing Rock protests against the Dakota Access pipeline, in which the Koch brothers have a major interest.

Is this the extent of the Koch brothers’ involvement with groups based in the UK? Who knows? I have not yet had a response from the Charles Koch Foundation. But I see these payments as part of a wider pattern of undisclosed funding. Democracy without transparency is not democracy.