Author Ruby Lal has done a tremendous job salvaging Nur Janan’s history and establishing that she became
a woman of immense prestige by virtue of her thought, of her passion, and of her character 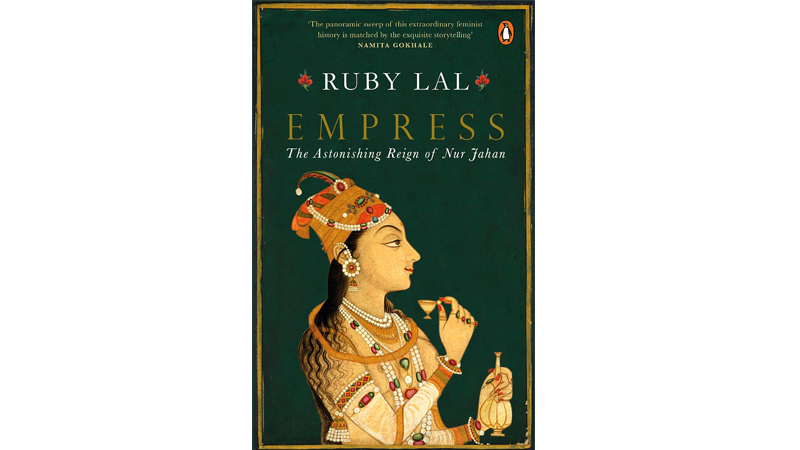 The book Empress: The Astonishing Reign of Nur Jahan introduces us to the charismatic Nur Jahan, Jahangir’s last wife and favourite partner, as a living and breathing human whose imperiousness and an inexhaustible, uncrushing woman’s conviction to happiness and power allowed her to create an imperial legacy of her own.

The author, Ruby Lal, highlights that Nur Jahan’s personality, when filtered through the pallid observation of official chroniclers, shapes into a conniving individual –a femme fatale, who exercised all of her charms and wiles to bewitch her husband, Jahangir, and acquired for herself incredible heights in the Indian statecraft. Modern narrative shows an extravagant emphasis on her romance with Jahangir to the complete exclusion of her inherent capabilities. It is Lal’s contention that both the narratives impoverish and narrow Nur Jahan’s image and destroy all that is attractive in her.

The book is concerned with unravelling Nur Jahan’s “personal history” (an area that remains little regarded by previous research): What kind of a woman was she when she was alive? What were her essential and unique qualities? How did she become a woman of enormous prestige and a force to be reckoned with? What impulses set her on her glorious imperial career and what restraints frustrated it?

The book Empress: The Astonishing Reign of Nur Jahan introduces us to the charismatic Nur Jahan, Jahangir’s last wife and favourite partner, as a living and breathing human whose imperiousness and an inexhaustible, uncrushing woman’s conviction to happiness and power allowed her to create an imperial legacy of her own

To answer these questions, La ldelves into a trajectory of Persian sources that have been hitherto ignored by historians, foremost among them are the memoir of the sixteenth century Mughal princess Gulbadan Banu Begum, daughter of the first Mughal Emperor, Babur; and Jahangir’s memoir, the Jahangirnama. What we receive now is an unsullied image of Nur Jahan that is immensely rich: Many sided, many faceted, drawn on many planes –she is not only beautiful but also a sensitive consort, a sage counsel as well as a skilled politician. Her other talents include aesthetic virtuosity, eloquence, and generosity: She is a wonderful poet, designer of clothes and carpets, patron of buildings, a philanthropist; and when occasion calls, she courts danger gladly. In fact, her most distinguished features are her hunting prowess and martial expertise –Nur surpassed even men in her exercise of them let alone the women of her time.

Scholars have argued that medieval Indians formed a vision of an overreaching ideal of kingship which was aspired to by all rulers of the subcontinent. The king had to be seen to be capable of providing both peace and protection in the realm; and who completed his other excellences by having a regal aura, personal bravery, and the ability to lead an army. The book is highly instructive in that it informs that Nur fully conformed to these aspects of Indian kingship showing herself to be worthy for the position of an authentic ruler.

The author relates a hunting expedition that Nur Jahan undertakes in Mathura to relieve the locals from tiger menace. The empress, from the vantage point of her elephant howdah, kills the dangerous tiger in a single well aimed musket shot. Her incredible marksmanship completely stuns her onlookers compelling a poet to express his admiration as: “Though Nur Jahan be in form a woman/ In the ranks of men she’s a tiger-slayer”. For a woman to have earned the title of “tiger-slayer” was no less than a tribute to her kingly qualities. Lal includes another incident that bears witness to the fact that she rose to prominence on account of her own ability and charisma- when she gallantly led her troops into battle and rescued Jahangir from the imprisonment of a disaffected noble. An Indian ruler strengthens his aura and consolidates his power through unflagging effort and unflinching risk –and Nur proved herself equal to the task.

Lal observes that the seventeenth century India was not clamped by intellectual fetters, as we might believe today, but “had a surprising openness and diversity of religion and thought, despite the weight of patriarchy” and was, therefore, quite liberal in its treatment of women

It is said that an individual cannot be fully understood apart from the conditions which create them. This stimulates us to ponder over the very structure of Mughal society that shaped individuals like Nur Jahan. The writer observes that the seventeenth century India was not clamped by intellectual fetters, as we might believe today, but “had a surprising openness and diversity of religion and thought, despite the weight of patriarchy” and was, therefore, quite liberal in its treatment of women. In fact it was deeply ingrained in the Mughal character to prize and value excellence in women. It is true that when Akbar cloistered women in the grand harems of imperial palaces, they no longer had the sort of physical freedom as their earlier female counterparts, but this sequestration never interfered with their “independence of mind”. The historian Ira Mukhoty in her book, Daughters of the Sun points out that the history of Mughal women is saturated with matriarchal figures who played a vital role in politics and empire building. Lal reveals that this tradition inaugurated a way of life in which a woman could even aspire to become a co-sovereign provided she had all the right ingredients. She adds that Jahangir’s revival of the Mughals’ peripatetic culture also “worked in Nur’s favour” as it kept her away from the confines of Mughal court. And so, we find Nur Jahan exercising royal prerogatives strictly reserved for men __ areas never treaded by a woman before.She sat in the Jharoka, for example, issued imperial orders, and struck coins in her name.

The strength of patriarchy, paradoxically, is also its weakness. If it helped Nur strengthen her capacities and allowed her an unprecedented broadening in the conception of women’s role; the system also had its limits. It found it exceedingly hard to accept the idea of woman as a co-sovereign. Jahangir’s mind may not be constricted by the conservative ideology of the day, but still it was an idea too advanced for his epoch and would take centuries to crystalise and gain general acceptance. As Jahangir’s health fatally declines and Shah Jahan’s rebellion against the state gains momentum, we hear voices condemning Nur. Bakhaari, a member of Jahangir’s court, calls her a schemer and announces that the “current conflicts were due to the mischief making of Nur Jahan”; Shah Jahan, who had begrudged Nur’s supremacy, accuses her of the “chaos that befell the empire during the final years of Jahangir’s reign”. We begin to lose vision of her true character. With Shah Jahan’s eventual ascension to the throne, Nur’s epistemic fall from recorded history is complete. The envy of patriarchal system turns against and humbles a woman who is too prosperous and claims too much power for herself.

The writer has done a tremendous job salvaging Nur Janan’s history and establishing that she became a woman of immense prestige by virtue of her thought, of her passion, and of her character. Whether you are a student of history or literature, this book is a page turner unlike any other in the field.