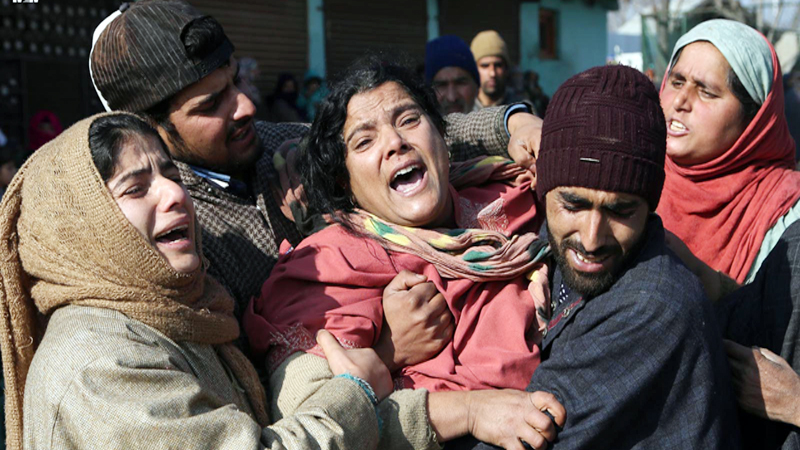 At least 11 youths were killed and over 250 injured in clashes and live firing by Indian security forces in Pulwama district of Indian Occupied Kashmir on Saturday.

Three freedom fighters were shot dead during a so-called cordon-and-search operation by Indian forces in Kharpora Sirnoo area of the district. Following the martyrdom of the youth, Kashmiris took to the streets and staged aggressive protests. Witnesses said as the villagers from the Sirnoo village marched towards the site of the earlier gunfight, Indian forces fired live ammunition at them, killing eight more. “There is mayhem. The soldiers fired bullets at unarmed civilians without a second thought,” said Ruby Hamid, a resident of Pulwama.

The dead from Saturday’s violence included 14-year-old Aqib Ahmad, who lived in the village of Prichoo. “He left with the others towards the site of the gunfight in the morning,” one of his family members recalled. “At 11:00 am, we heard he had been shot. At the hospital, we found he was targeted in the head. This was a massacre of people. Why didn’t they shoot them in the leg?”

Abid Hussain, one of the civilians killed, was an MBA graduate who had returned from Indonesia a month ago along with his Indonesian wife and three-month-old baby. The other deceased have been identified as Touseef Ahmad Mir of Urchersoo, Murtaza Bashir of Prichoo, Liyaqat Dar of Parigam, Suhail Ahmad of Ballow, Shahbaaz of Monghama and Amir Ahmad.

Dr Abdul Rasheed Para of the district hospital in Pulwama described the incident as ‘disastrous’. “We have received six dead bodies since the morning.

All of them had firearm injuries in the head, abdomen, and neck,” he said. “Most of them were in the age group between 18 and 23 years. They were all young,” he said. “Twenty-five people were treated with different injuries, some of them had bullet injuries and some were hit with pellets,” he added.

This year has been the deadliest in the occupied valley in nine years with more than 500 casualties, including 146 civilians.

Hundreds of Kashmiri youths, protesting the killings and shouting anti-India slogans, clashed with Indian forces in the south of the region. Shops and businesses pulled down their shutters and Indian troops rushed to the streets to prevent further demonstrations. Mobile internet services were also suspended in the Himalayan region as authorities feared unrest would spread. The Hurriyat leaders have called for a three-day shutdown in the region to protest the latest killings, asking the residents to march towards the largest army cantonment in Srinagar. “The Indian forces are armed with laws that protect them. They are trigger-happy forces. They fear no prosecution, no accountability. They are here to kill people, especially youth,” Mirwaiz Omar Farooq said. “The youth have been shot in the head, in the neck, the abdomen. It was shoot-to-kill, not to disperse them,” he lamented. “No one is talking about it. The world is silent. This is a complete colonial approach to suppress people,” he added.

Mehbooba Mufti, former chief minister of the region, who served in coalition with India’s ruling right-wing Bharatiya Janata Party (BJP), said no country can win a war by killing its own people. “How long are we going to shoulder the coffins of our youngsters? So many civilians killed today post encounter in Pulwama. I strongly condemn these killings, and once again appeal for efforts, to stop this bloodbath,” she tweeted.

Former chief minister and National Conference (NC) leader Omar Abdullah termed it a ‘horrible day’ and blood-soaked weekend in the occupied valley. “Another blood-soaked weekend in Kashmir. 6 protestors killed, 1 soldier killed in the line of duty. Together with the 3 militants from this morning’s encounter that’s 10 dead. Reports of many injured at the encounter site. What a horrible day!” he tweeted.