It’s no secret that the Saudi regime has been investing millions in its no-holds-barred propaganda war against the Islamic Republic of Iran. The custodians of Islam’s holiest shrines have not only managed to crush the voices critical of the regime’s policies, but have been carrying out a systematic misinformation campaign against Iran through run-of-the-mill media outlets bankrolled by Riyadh.

One example is the London-based Iran International, which was in news recently following the brutal murder of Saudi journalist Jamal Khashoggi. A report in Guardian revealed that the journalist was killed because he had revealed sensitive information pertaining to Saudi’s propaganda projects like Iran International to the newspaper’s Iran correspondent.

There are more such projects waiting in the pipeline across the globe and many dubious characters are being roped in to aid kingdom’s propagandists. The latest rabble-rouser to join Saudi’s campaign is also a seasoned hate-monger who never gets tired of spewing venom against the Islamic Republic and keeps spreading rumors, innuendos and half-truths.

Gulbuddin Hekmatyar, the leader of Hizb e Islami Afghanistan, who last year signed a secret peace deal with the Afghan government, continues to be a notorious and controversial figure in Afghan politics. He return drew anger and outrage across Afghanistan as people took to streets to condemn Afghan government’s amnesty to a ‘war criminal’.

Although he claims to have renounced violence and joined the mainstream, he still quite brazenly bats for the insurgents. The terms and conditions of the agreement between him and the Ashraf Ghani administration in April last year are still shrouded in mystery.

Earlier this week, in an interview to Saudi-funded newspaper Asharq Al-Awsat, Hekmayar did what he does best smear campaign and propaganda against Iran. Hekmatyar-Saudi is a match made in hell. He said Iran has harmed Afghanistan and its people the most by paying money to keep the war ignited. The interviewer had his task cut out to funnel out his bitterness and venom for Iran. That is the basic objective of Saudi-funded media outlets like Asharq Al-Awsat.

In journalism, they say, facts are sacred. But these rules don’t apply to those agenda-based propaganda outlets. Their job is to distort facts and Hekmatyar is just the right man for the job.

In the course of the interview, which took place at his government mansion in Kabul, the former militant commander who fought against Soviets in Afghanistan on CIAs payroll said the U.S. has handed Afghanistan to Iran on a silver platter. I am sure he didn’t know what he was saying. His conspiracy theories are so absurd and funny that it is hard not to have a good laugh at them.

It’s not the first time Hekmatyar has suggested there is cooperation between Tehran and Washington. In May 2006, following the killing of former Taliban chief Mullah Akhtar Mansour in a drone strike, he accused Iran of providing information to U.S. spy agencies about Mansoors whereabouts, which led to his killing.

Quite astonishingly, he seemed to believe there is some intelligence sharing agreement between Iran and America, the two adversaries. Figments of imagination, as they say. 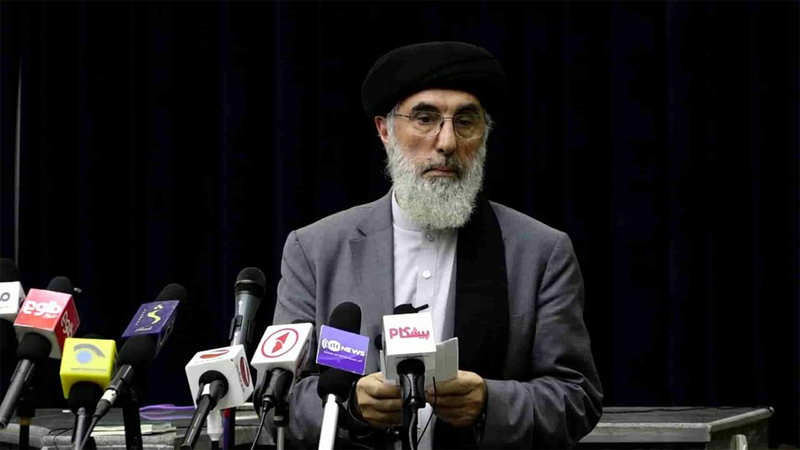 Hekmatyars only goal of life, it seems, apart from his lofty political ambitions, is to fabricate information about the Islamic Republic of Iran and to put a spanner in Afghanistan-Iran relations. His statements over the years bear testimony to that.

In July this year, he accused Iran of destabilizing Afghanistan to further its own economic interests. Using his fallacious arithmetic, he said Iran’s exports to Afghanistan stand at $5 billion, of which $3 billion is done through smuggling. Even the top-notch economists at World Bank cannot churn out such mindboggling numbers without meticulous ground work, but this whiz kid made the calculation at home.

He further said that Iran was creating hurdles in TAPI gas pipeline project and wanted Afghanistan and Pakistan out of it. Those who follow regional developments closely would know that Iran has expressed readiness to export natural gas of Turkmenistan to Pakistan and beyond, given Iran’s strategic location in the center of the region. But, the old man doesn’t even understand basic economics.

In December this year, he dropped a major bombshell, claiming that ISIS in Afghanistan was Irans game and the U.S. or Saudi Arabia had nothing to do with the group. He said the ISIS fighters were infiltrating into Afghanistan from Iran.

He not only pushed the blame on Iran but gave clean chit to the U.S. his friends-turned-enemies-turned-friends. It is widely believed that the agreement between him and the Afghan government was brokered by Washington and Riyadh. That’s why his language towards U.S. has softened after the agreement was inked.

Hekmatyar has gone to extreme lengths in the past for his political goals. During the Afghan civil war in early 90s, he played a particularly bloody role, just to gain power. He even won a sobriquet of ‘The Butcher of Kabul’ for his horrendous human rights abuses. Agreement between him and the Afghan government means his lust for power has not diminished.

He knows Washington and Riyadh’s blessings can prove handy to achieve that goal. But his smear campaign and venomous remarks against Iran won’t help him or his masters. At the end of day, he is just a pawn in a very sinister game played out by Riyadh and Washington.