Canada standing on the wrong side of history 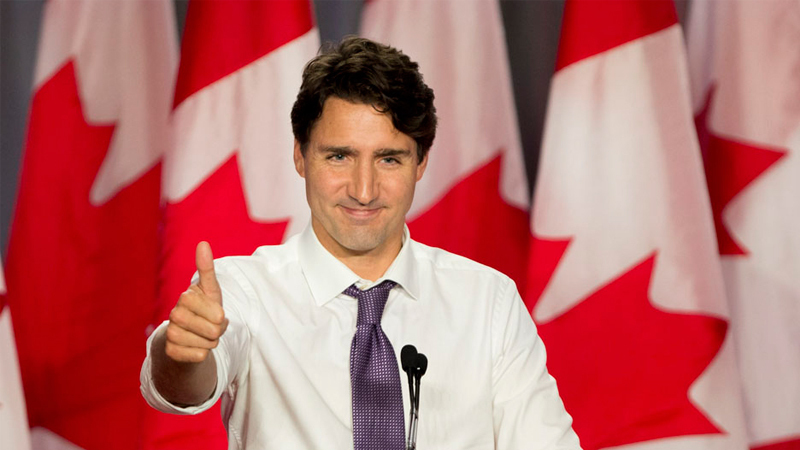 How does one explain Canada’s contradictory foreign policy regarding Palestine and Israel? On December 4, the secretary general of the Palestine Liberation Organization, Saeb Erekat, praised Canada’s commitment not to follow in the footsteps of the US by transferring its embassy from Tel Aviv to Jerusalem.

But there is little worth praising here. Respecting the internationally recognized status of Jerusalem is a legally binding commitment to international law. The fact that the US chose to violate the law hardly makes the opposite act heroic.

Only five days earlier, Canada joined a tiny minority of states — alongside the likes of Israel, the US, Australia and the Marshall Islands — to vote “no” on a UN General Assembly (UNGA) resolution titled “Peaceful Settlement on the Question of Palestine.”

The Canadian government, which is keen to present itself as a model, neoliberal, progressive country, even the antithesis to the US’ hawkish policies, voted against a resolution that calls “for intensified efforts by the parties… to conclude a final peace settlement.”

If you find such behavior confusing, then you are not paying attention. Canada has not changed at all. It is our understanding of Canadian foreign policy that has almost always been marred by a true lack of understanding. And there is a good reason for that. The Canadian government has mastered the art of political branding. The only period in modern American history that is comparable to Canada’s successful political propaganda was the presidency of Barack Obama.

But Canada’s Prime Minister, Justin Trudeau — seen as the “human face of neoliberalism” — is an even more successful brand than Obama. While positioned as the political opposite of conservative former Canadian Prime Minister Stephen Harper, they are both committed to the ideology of neoliberalism.

Trudeau’s “human face of neoliberalism” is nothing than a carefully constructed mask meant to hide the hypocritical and militant policies that Canada continues to pursue. And nothing better exemplifies this than its record on Palestine.

In the first 18 months of Trudeau’s mandate, Canada voted against 15 UNGA resolutions that were critical of Israel.

It has been argued that Canada’s foreign policy and its UN voting records are often inconsistent. This, however, seems to apply only to Israeli crimes against Palestinians.

When Trudeau defeated Harper, many breathed a sigh of relief, particularly because of the latter’s blind support for Israel. So is Trudeau really different?

Let’s consult the facts. The page on the Trudeau government’s website entitled, “Canadian policy on key issues in the Israeli-Palestine conflict” is almost an exact replica of Harper’s, with one notable exception. On Trudeau’s page, his government recognizes the “experience of Jewish refugees from the Middle East and North Africa, who were displaced after 1948.” This is a misconstrued version of history that has been injected by Zionists whenever the rights of Palestinian refugees — who were displaced by Jewish militants during the 1948 ethnic cleansing of Palestine — is brought up. The very first “key issue” for Trudeau’s government is “Support for Israel and its security.”

Trudeau makes the claim that his government’s assessment of UN resolutions is guided by “its merits and consistency with (Canadian) principles.” Harper seemingly defied these “principles” on numerous occasions, notably when his government voted against UN resolutions critical of Israel, including 66/17 in 2012, 67/23 and 68/15 in 2013, and 69/23 in 2014.

But Harper’s exit did not usher in a new moral age for Canada. On the contrary, Ottawa’s love affair with Israel intensified. Aside from carrying on with the same anti-Palestinian attitude at the UN, on Nov. 24, 2015, the Trudeau government even voted against UNGA resolution 70/15, which reaffirmed the “illegality of the Israeli settlements in the Palestinian territory occupied since 1967, including East Jerusalem.” Such a vote even goes against Canada’s own declared position on the illegal Jewish settlements.

This should not come as a surprise, though. Take Ottawa’s stance on terrorism, for example. In its “key issues” on Israel and Palestine, the Canadian government “condemns all acts of terrorism,” but it later qualifies this.

“Canada has listed Hamas, Palestinian Islamic Jihad, Hezbollah, the Al-Aqsa Martyrs’ Brigades, and other groups as terrorist organizations,” it elaborated. Not only did it fail to list any Jewish group as terrorist, or at least emphasize the need to prosecute war criminals (in this case, Israeli leaders), it only linked Palestinians and Arabs to acts of terrorism.

But what if Palestinians decided to use popular, non-violent and democratic means to display resistance? They did, and were still condemned for it. In 2016, with much personal enthusiasm from Trudeau himself, the Canadian Parliament overwhelmingly voted in favor of a motion that condemned the Palestinian Boycott, Divestment and Sanctions (BDS) movement. Since then, the anti-BDS policy has become a fixture in the government’s attitude toward the Palestinians.

Last month, in a speech he made to apologize for Canada’s immoral act of rejecting Jewish refugees escaping Nazi atrocities in 1939, he directly linked BDS with antisemitism. “Antisemitism is still far too present,” he said, as “Jewish students still feel unwelcomed and uncomfortable on some of our colleges and university campuses because of BDS-related intimidation.”

Linking BDS with his country’s disgraceful antisemitism against refugees decades ago might have been a masterful stroke by his pro-Israeli speech writers. However, swapping historic hate for Jews with modern hate for Palestinians shows that Canada has learned nothing from its sordid past.

Trudeau and his government will certainly be judged by future generations, just as his predecessors were judged for their past sins, for choosing, despite the passage of time, to stand on the wrong side of history.

Ramzy Baroud is a journalist, author and editor of Palestine Chronicle. His latest book is “The Last Earth: A Palestinian Story” (Pluto Press, London, 2018). He earned a Ph.D. in Palestine Studies from the University of Exeter. Twitter: @RamzyBaroud