Imagining Lahore: The City That Is, The City That Was by Haroon Khalid is a valuable contribution to popular but sparse nonfiction writing on Pakistan 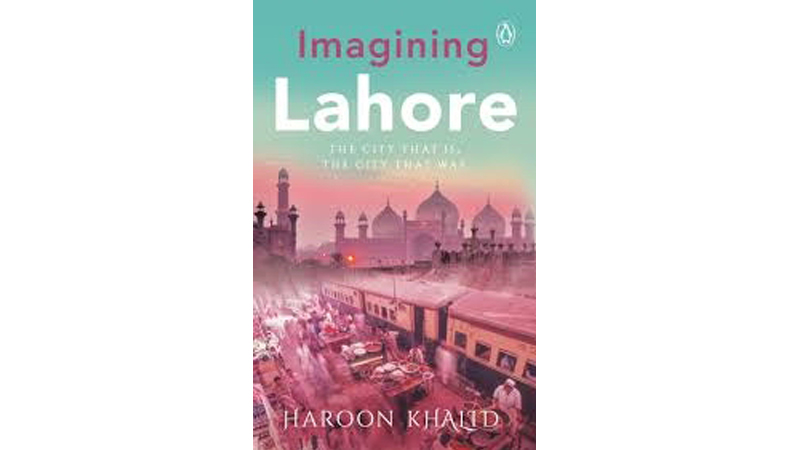 In Imagining Lahore: The City That Is, The City That Was, inhabitant-turned-explorer, Haroon Khalid reflects upon his everyday encounters with his home’s historic urban landscape. He recasts its roads, places of worship, monuments, neighbourhoods, and various sites, into portals leading to the past that have witnessed the shifting sociocultural and political histories of the city – from its lesser known Hindu origins, to its current dominance as the nation’s unofficial seat of power.

Written for English language educated Pakistanis – particularly Lahoris – with an erudite interest in the city’s emergence, Khalid attempts to further spark their curiosity about Lahore’s contemporary relationship with its past. Inviting readers to travel back in time, he wants them to understand that to truly know Lahore, they must map its long political history onto its geographic present. Mughal rule, Sikh usurpation, colonial governance, and, following independence, intermittent military dictatorship, have all left enduring marks on the cityscape – often hidden in plain sight.

Sociologists of urban spaces have theorised how the organisation of cities symbolises mainstream political narratives that are often inherently repressive, allowing the state to foreclose dissent. It is this deciphering of Lahore that makes Khalid’s book so engaging, opening with the author yelling and cursing his way through standstill traffic at Kalma Chowk. An all too familiar occurrence for any dweller of an overpopulated metropolis, for Khalid, however, this experience is a reminder that to the exclusion of needed socioeconomic development across the country, power and resources have instead been diverted into the province and its metropolitan center under the former chief minister’s disproportionate focus on road building. Amidst the gridlock, Shahbaz Sharif’s billboard looms from a flyover, mid-construction, giving commuters no choice but to stare upward as they wait in annoyance through this daily ritual of helplessness.

By inviting readers to travel back in time, he wants them to understand that to truly know Lahore, they must map its long political history onto its geographic present

In this attention to city structures as the site of study, Khalid’s latest book is a departure from his earlier works. In Search of Shiva, and White Trail, are as much studies of Pakistan’s religious minorities, as they are explorations of the country’s cross cultural devotional past and enduring present. In descriptively detailed accounts, Khalid’s interlocutors figure centrally, negotiating space for their beliefs and practices within an increasingly homogenising nationalist environment. Written in auto-ethnographic style, Khalid takes his readers along on a journey of self-discovery, as he, conscious of his positionality within the Muslim majority, encounters unexpectedly rich religious syncretism. In Imagining Lahore, Khalid renders the Lahore’s sites and structures interlocutors, which themselves make the past communicable.

Watering holes, former Mughal opulence, and new localities, all become embarkation points for travel through a critical political history of the city. Khalid describes his lonely experience at the Pak Tea House, no longer the hub of activity it was between the 1930s and 1970s. Once teeming with left-leaning intellectuals and the literary minded, critical of increasing authoritarian rule, now only their portraits adorn the walls, appropriated as national cultural symbols, their radical, anti-state politics repudiated. Over the minarets of the walled portion city are the Mughal prisons that saw revived use in the 1980s under dictator Zia Ul Haq, in an attempt to completely and finally crush all political dissent. Then, with scathing distaste for the sprawling, industrially polluted housing schemes that expand the city limits, “[promising] a suburban lifestyle to its residents, which continues to evade them,” Khalid notes that Sabzazar is also the final resting spot of communist poet and activist Habib Jalib who vehemently opposed Ayub Khan, Pakistani’s first military dictator.

It is this deciphering of Lahore that makes Khalid’s book so engaging, opening with the author yelling and cursing his way through standstill traffic at Kalma Chowk

In this way, Khalid shows how Lahore obfuscates stories of erasure as it ages – but in that paradox of modernity becomes newer. In his effort to illuminate and explain lesser known layers of political history beneath the city’s current façade, however, Khalid’s narrative voice is sometimes missing. As the book progresses, he relies heavily on secondary sources, not to support his analytical and thematic approach, but to document the past, at times leading to a dry recounting of events, chronologies, and generalisations that need further unpacking.

Imagining Lahore is a valuable contribution to popular but sparse nonfiction writing on Pakistan. Today, travel to the country is significantly reduced, part of a decades long waning tourism industry, largely due to militarised violence in the region following the ‘War on Terror.’ Khalid’s is a pertinent and timely localised perspective on one of South Asia’s most historic cities, often overlooked in characterizations of the region as unsafe. From within Pakistan, populism cries for a more “positive image” of the nation, and any critique of the country’s inability to deal with its problems, whether security or development related, is seen as a “western agenda.” Instead, what Khalid’s book shows is that it is possible to engage with Lahore’s varied history in thoughtful way, and to love and lament one’s home.