* Info minister says he will be more than happy to vacate position for Sh Rashid but won’t ‘bow to blackmailing by advertisement lobby’
* Sh Rashid backtracks on claims, says he will refuse even if offered Fawad’s job 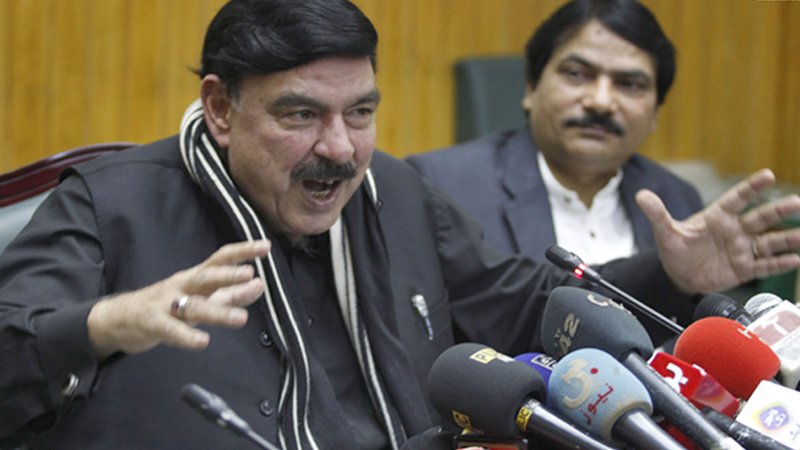 A controversy erupted vis-à-vis the portfolio of information ministry on Saturday as Fawad Chaudhry offered to voluntarily step down in favour of Railways Minister Sheikh Rashid after the latter claimed that Prime Minister Imran Khan had offered him to take over the information ministry.

Sheikh Rashid’s ‘controversial’ comments were aired by some private TV channels, showing him talking to a person before the start of a press conference in Lahore on Saturday. During the ‘off-camera’ discussion, the railways minister claimed that the prime minister had called him four times to deliberate on the matter. Passing remarks about Fawad Chaudhry’s recent trip to the United Kingdom, Sh Rashid reportedly said that the information minister was having a ‘picnic’ in London.

As soon as news about these comments started making rounds on the social media, Fawad Chaudhry took to Twitter saying he will be ‘more than happy to vacate his position for Sheikh Rashid and serve as an MNA’. “I will be more than happy to vacate my position for Sheikh Rasheed sb and serve as MNA, we all use trust powers bestowed by people of Pakistan and PM decides who is best fit in the role, However, till I am minister ll not bow to blackmailing of Advertisement lobby,” he wrote on his Twitter handle.

Later in the day, Sheikh Rashid issued a ‘clarification’ over his statement by saying that there was no truth into the matter and that there is no chance of him taking Fawad Chaudhry’s place. “Chaudhry is like a younger brother to me. I have no intention to take over the information ministry. Even if the prime minister offers me the portfolio, I will politely refuse,” he told a private TV channel. “Fawad Chaudhry is the best information minister; I am his supporter and stand by him,” he said.

“I had a word with Fawad yesterday and I told him to return in view of the circumstances,” he said. “I told him via phone that he is greatly needed [here].” He described the information minister as an ‘extremely hardworking person’, saying that no one should consider that he was against Fawad Chaudhry. “I’m happy with the railways ministry and will deliver in the same,” he said.

He lamented that people even record private conversations, praying that may Almighty Allah guide the ones running fake stories to the right path.

Special Assistant to Prime Minister Iftikhar Durrani also clarified that there was no truth in reports of replacement of information minister. “Fawad Chaudhry is working efficiently and the prime minister is satisfied with his performance,” he said. The PM’s aide said Chaudhry has been in London for four days and he would return to country on Sunday. Durrani said he had no idea of the cabinet reshuffle, adding that the prime minister would review performance of different ministries on Monday.

It is pertinent to mention here that the prime minister has summoned a meeting of the federal cabinet on Monday to review the performance of the federal ministers on an individual level.