This book by Nyla Ali Khan is a collection of concise but detailed information of speeches and interviews of Sheikh Mohammad Abdullah, who reigned as Prime Minister of the State of Jammu and Kashmir from 1948 to 1953 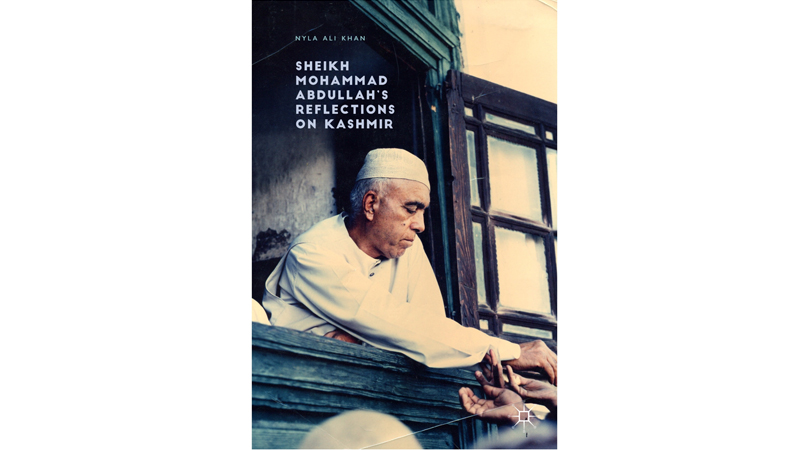 The writer is a member of the Council on Foreign Relations.”

Dr Nyla Ali Khan’s book on Kashmir, intertwined with the legacy of her illustrious grandfather, Sheikh Mohammad Abdullah, is a must read for anyone interested in understanding the prevalent socio-economic-political conditions in today’s Jammu & Kashmir. It is an objective narrative of more than eighty years of history covering a land that remains disputed between India and Pakistan since 1947. I truly enjoyed reading it and found it hard to decide whether to first comment on the seamless flow of the author’s prose or applaud her somewhat lesser known talent of recording history. Either way it is by no means a superficial account of an important part of history; the book is extremely well-researched and the narrative is supported by authentic footnotes. A work such as this one is not only a significant token of the author’s love for her homeland but it also takes her scholarship to newer heights.

The author, a highly respected professor at a very well-regarded university and college in the United States, possesses great ability to capture the interest of her reader(s) and to keep them fully engaged through the end of her book. I have read her other works over the years; this book, however, left me pleasantly amazed with the painstaking research that she put into the effort. In completing this work Dr Khan had superb and unparalleled access to primary sources which she has skillfully merged with independent secondary sources. Notwithstanding the unfortunate development of political events in J&K in the last decade, and what might follow, this work will always be a lighthouse for posterity.

In terms of physique Abdulla was a tall man — a towering personality 6 feet 4 inches in height — who stood out prominently amongst his peers and contemporaries. However the physical attributes defining this giant amongst men were also prominently reflected by the bigness of his heart, his deep intellect, his empathy for, and sensitivity to, the hurt and agony of the masses and, last but not least, his unwavering commitment to achieving his goal by not violating the lines of peace and decency

Dr Khan has done a great job in portraying the full persona of a multidimensional figure Sheikh Mohammad Abdullah who, despite many betrayals and stabs in his back, retained the hallmarks of his identity i.e., integrity and decency. Abdullah, throughout his political life, struggled to have the voice of the people of Kashmir heard in determining their destiny. His dream – even after his death – remains unfulfilled due to the shenanigans of the stooges fathered by the New Delhi establishment as well as by the puppets installed in high offices in the Pakistan administered part of Kashmir where the military calls the shots.

Abdullah was most disturbed by the mis-rule of Maharaja Hari Singh and to free his people, a large majority of whom were Muslims, he formally launched his struggle in the 1930s having figured out that the sun was beginning to set on the rule of the British Raj in undivided India. Abdullah, a highly educated man with a deep intellect, had inclusiveness and pluralism amongst his core principles. He was committed to struggling on behalf of the entire population of Jammu & Kashmir and the thrust of his political philosophy, greatly influenced by learned men like Sheikh Nur-ud-din Wali and Sheikh Hamadan Amir-e-Kabir, was a manifestation of the aspirations of all citizens of the state of Jammu & Kashmir. During his lifetime he enjoyed a close friendship with the great Lenin Award winning poet, Faiz Ahmed Faiz, who continues to be recognised as a messenger of love and social justice. Without being a nationalist in the narrow interpretation of the word, Sheikh Abdullah wanted to build a strong nation state. Within a few years from the end of British rule it became clear that his sincerity as well as his creative thinking were at odds with the agenda of the rulers in New Delhi.

Much has been written on Sheikh Abdullah. Meanwhile the struggle of the people of Jammu & Kashmir to have control of, and a say in, their own destiny has unfortunately morphed into a situation that feeds itself on the fire of extreme religious thought. All pretenses of democratic rule in the state, including different permutations between groups with vested self-interests, have been shattered. Apparently, the system is being tweaked and manipulated to abrogate Articles 370 and 35A of the Indian Constitution. If such scheming were to succeed it would be akin to extinguishing a fire by throwing gasoline on it. The masses nostalgically long for a leader in the mold of Sheikh Abdullah who fought his unfinished battle without making any allowance for religious frenzy. A quote from his speech of January 28, 1968 to the Muslims of Deoband is just one example:

“I appeal to the people who instigate our young men

for their own purposes to think deliberately about the

after-effects of this bitterness on the progress of the

country. You should direct your energies to our problems

and search for a solution rather than wasting your time

on disputes and demonstrations.”

In terms of physique Abdulla was a tall man – a towering personality 6 feet 4 inches in height – who stood out prominently amongst his peers and contemporaries. However the physical attributes defining this giant amongst men were also prominently reflected by the bigness of his heart, his deep intellect, his empathy for, and sensitivity to, the hurt and agony of the masses and, last but not least, his unwavering commitment to achieve his goal by not violating the lines of peace and decency.