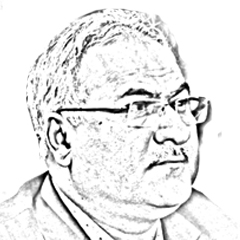 Karachi is bigger than 80 countries of the world in terms of population which is not less than 25 Million, a critical and underappreciated factor contributing to its myriad multifactorial problems

People from various ethnicities and linguistic groups live in Karachi, which makes its very issues variable and unique in nature and at times these issues come across with respective shades of ethnic, sectarian and linguistic undertones along with all powerful & influencing political agendas with or without establishment’s patronage. Adding to the complicated equation are the ambitious oligarchs with deep pockets who are the new but adamant entrants to Karachi’s murky political equation.

From winning every election in the last three decades through a mix of genuine support from the Mohajir/Urdu speaking community, neighbourhood-level party-cadre structure, and through the deployment of violence and fear and the various levels of support from within the various pillars of establishment MQM effectively managed to retain firm grip on Karachi and urban areas of Sindh. MQM’s chapter has more or less come to a sordid hiatus if not its end, with lessons for those willing to learn and apply in working towards a greater reconciliation of all those who yearn for Karachi’s peace, stability and success irrespective of ideological and political divides and most importantly keeping personal agendas and interests aside. The results of 2018 election, probably Pakistan’s first violence-free election in the past three decades and also the most polarizing in recent history, has significantly altered the political landscape not just for the country but greatly for Karachi in more ways than imaginable.

Like it or not the fact remains that this is a Naya Karachi. The clean sweep in Karachi by PTI is a reflection of changing undercurrents and overtones that Karachi based parties like MQM & PSP failed to fathom, foresee and seemingly are oblivious even today what swept them off their clay feet. The alarming apathy is all too prevalent in MQM, though fact stands that even with its ever fractious factions MQM still is relatively better off than PSP but let there be no illusion that it too is heading towards oblivion.

No doubt that the organizational weakness, internal squabbles, lack of funds and a surge in non-traditional voters have all contributed to the dismal performance of the successors of Karachi’s leading political party in 2018 election but then these are all debatable points and only add to soothing and pacifying the hurt egos of the MQM-P & PSP leadership and to a large extent diverting and deflecting from the core issues, looming reality on ground and shying away from facing it with all its ugliness and stench. The fact is that both MQM-P & PSP still have not evolved with the drastically changing political scenario and totally failed in feeling the pulse of the people and their obvious lack of faith in the leadership of the two parties and the archaic message that they bring to the people. People are bored and tired of hearing the same old narrative which doesn’t sell anymore.

No doubt that the organizational weakness, internal squabbles, lack of funds and a surge in non-traditional voters have all contributed to the dismal performance of the successors of Karachi’s leading political party in 2018 election

For the first time in 30 years, the residents of Karachi resoundingly rejected the MQM. In the last general elections (2013), Khan’s PTI had managed to bring out about 800,000 non-traditional voters but lost because of the MQM’s organizational efficiency. This time around, the MQM-P did not have that. “We can say there was a boycott by MQM supporters, but besides that, voters in the Muhajir areas rejected Hussain’s boycott appeal and voted overwhelmingly for Imran Khan,” The fact is that PTI demolished even the PPP in its stronghold of Lyari, hammering Benazir Bhutto and Asif Ali Zardari’s son and political heir Bilawal Bhutto. Lyari hit by crime and a crippling water shortage, its residents opted for change this time.

No different was the reaction of rest of Karachiites at the ballot box- the fear and siege was lifted and people who came out for Imran Khan were not the traditional voter but the Naya voter who would stay home in past. The old voter who traditionally voted for MQM was dejected and didn’t bother much for either of the two parties MQM-P & PSP and either stayed home or voted against them and in favour of PTI or some other party. The fact remains that the mega city of Karachi which gave 14 out of 21 seats to Pakistan Tehreek-e-Insaf (PTI) witnessed one of the lowest voter turnouts in recent history of general elections. Three of the PTI winning candidates obtained less than 10 percent of the registered votes in their respective constituencies. This fact certainly gives us hope and much resolve to work towards fixing things to regain the vote bank and to be back in the political equation through ballot and with dignity.

For Imran Khan, winning the political fortress of Karachi was strategically important as it boosts his claim that his party is a national entity with its appeal spread across the country. His campaign slogan in Karachi was “Wazir-e-Azam Karachi se” and let us not forget that Khan has also been elected from a traditional MQM stronghold in the city, pushing the MQM-P candidate to second place. It is critical to analyze why MQM-P and PSP did not operate like a well-oiled machine as was the norm during previous elections starting from the unit, responsibilities would be assigned to workers. They would go door to door pushing voters to come out. In areas like Gulshan, New Karachi, Gulistan-e-Jauhar, each apartment complex used to have a go-to person for the MQM and of late for PSP, who would know how many potential voters there were in each building and their political leaning.

Both PSP & MQM-P alleged rigging, saying their political agents were prevented from being in the polling stations when the votes were counted. It’s true to a certain extent but to the people at large this lamenting sounds like hysterical screams from a sore loser.PTI leaders, howsoever, claimed that the disappointment of the city’s residents with the MQM and Khan’s charismatic personality are the two key factors behind their win.

It’s a fact that Karachi cannot be compared to any other city in Pakistan and is by far the most federal in its composition and character than any other city in the country. People from all federating units reside in Karachi in far greater numbers than in any other federating unit outside their home province. The federal government, therefore, is obligated to take the lead when it comes to resolving the governance crisis plaguing the city. Karachi, like any mega city, needs a different and distinct governance model. This model needs to have effective control over all critical levers of power and decision-making that impact the life of the common man. While the 18th Amendment passed a major bulk of responsibilities to the provinces, this in no way meant that the federation could abdicate its responsibility, especially when it comes to Karachi and its keystone role in the Federation.

The Million Dollar question is where are the claimants to the title of ‘true stakeholders of Karachi’ in all this scenario? Do they enjoy any position of strength and do they even fit in the Naya Equation?  We will have to come out of our deep seated delusions which are no more than insecurities making us paranoid and deeply suspicious of not just the political rivals but of each other as well and only adding to our isolation and weakening of our ranks as respective parties and collectively as a possible political force to be reckoned with. Indeed, the ghosts from the not too memorable past have to be buried.

Scholastically, I will give some very serious consideration to the prevailing mood and mindset of the people at large and esp. those who in past have voted for Karachi based party and even those who haven’t but are keen for the factions to bury the hatchet and come to terms for the peace and perhaps a grand reconciliation with the greater spirit of forgive & forget in anticipation of a better future for the city and the people who inhabit it.

This is not just a widespread thought that one keeps observing in all strata of society and indeed a noble thought that must be given all due importance and support in all possible ways by all those who care for Karachi and rest of urban Sindh.

Where do we go from here? The possible avenues are limited and it’s not the path as much as clarity of vision that needs to be subscribed by all and accordingly define objectives with credence and due respect to Election 2018 debacle and the new reality on ground. In essence a deep dive into our souls and to identify & face our faults, weaknesses and critically analyze the over ambitious calls of judgement that mindlessly put us on the path to ignominy, isolation and missing a brilliant opportunity due to sheer hubris.

The writer is a Physician scientist & writer with deep interest in Urban studies and can be contacted at khawarmehdi@yahoo.com