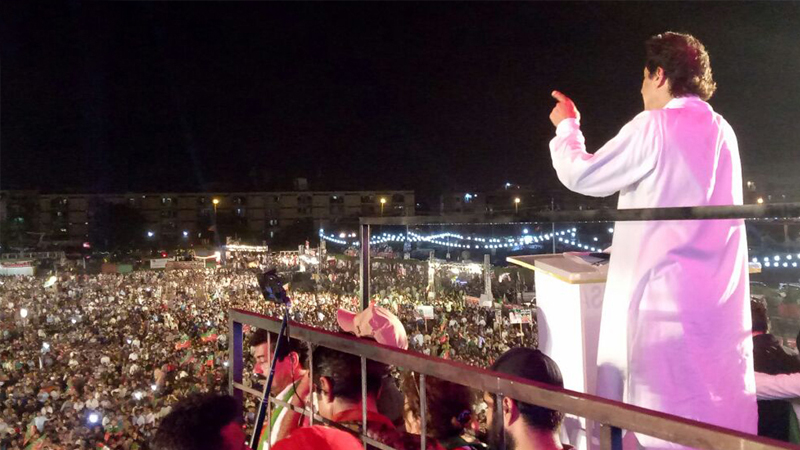 Pakistan Tehreek-e-Insaf (PTI) Chairman Imran Khan vowed to transform Karachi into a great city with his 10-point agenda, which he announced at a party rally in the megapolis on Saturday.

Thanking the people of Karachi for welcoming him, he said the city’s residents were the most politically mature in the country. “Karachi is the financial hub of Pakistan. Karachi’s people [are always] the first to unite against the country’s issues,” he said, as he called on the public to shun differences and come together for the common good.

Lamenting the state of education and health in Sindh, particularly the interior areas, Imran said it had become the most impoverished region in the world.

He said the only way to end poverty was to eliminate the menace of corruption. “No country can progress when its leaders are rooted deep in corruption.”

Imran said his priority would be to end corruption from the country, if his party is elected to the power corridors.

“How can they [the ones in power] end corruption when they are themselves involved in money laundering worth billions?” the PTI chief lashed out at the ruling PML-N. He then proceeded to present his 10-point agenda to resolve the city’s woes. Imran highlighted that the [shortage of] water was the biggest problem of Karachi, adding that the city generating 70 per cent revenue of the country did not have enough water to meet its needs.

“We will change the administrative system here and bring a directly elected mayor of the city,” he said, noting that under the 18th Amendment provinces were empowered but the provinces did not delegate these powers to ground level.

Lamenting the state of public education in the province, the PTI chairman promised to change the system of government schools for the poor children and make education accessible and affordable for all. “We will establish international standard universities here,” he said.

“Officials like Rao Anwar, it is said, have murdered 440 people and Asif Ali Zardari showers praise on him. Who ordered Anwar to kill [those] people?” Imran questioned.

“Abid Boxer said he did not kill anyone without orders from Shehbaz Sharif,” he said, and asked Bilawal to inquire from his father on whose orders Anwar carried out extra-judicial killings.

“We will help the trade fraternity and introduce a climate for the businessmen in Karachi to compete with traders of other countries,” said the PTI chief.

He added: “Asad Umar, our shadow finance minister, had been holding meetings with businessmen.”

He pointed out to the persisting power crisis in Karachi and criticised the government for failing to do its job of ensuring provision of electricity to the people. “It is the government’s job to provide electricity, not K-Electric’s. We will get you electricity and end power pilferage.”

The PTI chairman vowed to improve the sports infrastructure in Karachi if voted into power. He said the metropolis has a huge number of young people, yet it has not been producing the same number of athletes due to the lack of grounds and facilities. “We will establish grounds and parks for you.”

Imran gave example of KP province, where he said the PTI government has planted one billion trees.

Pakistan is ranked number 7 on the global warming index, he said, and emphasised the need to plant more trees in order to combat pollution.

“We will turn entire Pakistan green, including Karachi. Especially in cities, we will grow trees with full planning,” he asserted.

He also lamented the poor sewage and waste management infrastructure of the city and vowed to improve it.

Imran said his party would ensure the functioning of Circular Railway as the city needs improvement in its transport infrastructure. “If the Orange Line is needed anywhere, it’s Karachi,” he remarked.

Unemployment is the biggest issue of the youth, the PTI chief said, as he resolved to establish skills centres in Karachi to overcome the “disease of unemployment”. We will devise policies to provide employment to the poor, he said. Earlier, Vice Chairman PTI Shah Mahmood Qureshi expressed his condolences to the families who lost their loved ones at the May 12, 2007 tragedy.

“May 12, 2007 was the day when people of Karachi decided to move away from the politics of blood, and today is the evidence of that promise,” he said in his address.

Taking direct aim at the Pakistan People’s Party and Muttahida Qaumi Movement, he said the two parties have been ruling Karachi for decades and when “Karachi’s law and order situation worsens, they blame each other.”

Calling on the people to decide the fate of Karachi, Qureshi questioned what would have happened to the city if the Rangers had not come in.

“Election is nearing, it’s the time to decide, you’ll have to stand up for the better future of your children,” he continued, as he urged the public to vote for PTI.

Earlier, the PTI chief while addressing a party’s power show in Lahore last month had unveiled an 11-point agenda for ‘Naya Pakistan’.