* Following SBP intervention, greenback closes at Rs 138.50 in interbank market
* In open market, dollar closes at Rs 141.50 at the end of day's trading 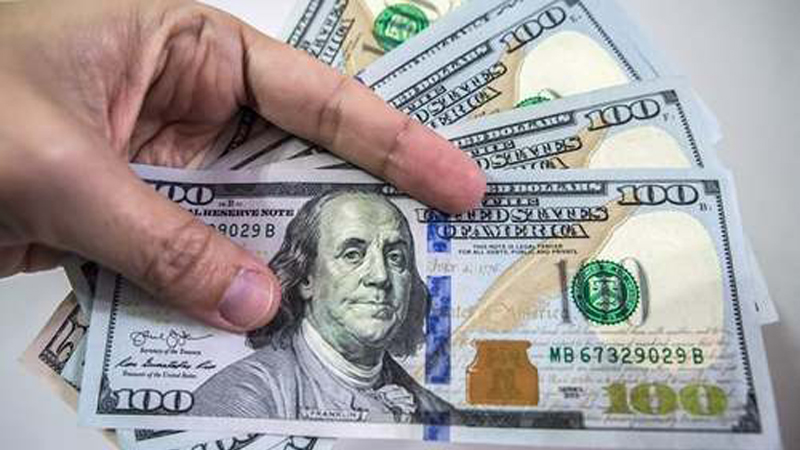 KARACHI: The greenback surged in value against the rupee as it appreciated to record all time high level of Rs 144 for buying in the interbank market on Friday.

However, at the end of the trading session, the domestic unit after an increase of Rs 8 in a single day transaction versus dollar closed at Rs 138.50, still all time low.

In the open market, rupee shed value versus dollar to close at Rs 141.50 at the end of day’s trading, with an increase of Rs 6.10, currency dealers said.

The downward rally of the rupee against the dollar is being attributed to Pakistan’s meeting of all prior conditions put forth by the International Monetary Fund (IMF) for qualifying for a loan of up to $6 billion. The international donor has reportedly asked Pakistan to mop up dollars from the market, as country’s net foreign reserves slipped drastically. Finance Minister Asad Umer has already said that Pakistan would probably meet prior conditions for a fresh bailout package, adding that Pakistan had to make external debt payments amounting to $8 billion by December 2018.

The State Bank of Pakistan (SBP) has been advised not to intervene in the foreign exchange market and now the exchange rate mechanism depends on supply and demand position. This move has paved way for approval of loan from the IMF and a green signal from the donor is likely very soon.

The foreign debts have surged by Rs 430 billion to Rs 1,378 billion with an increase of dollar value to 19.5% during Pakistan Tehreek-e-Insaf government’s first 100 days.

Muhammad Sohail of a macroeconomic research consultancy said the IMF has been steadfast on its stance and eventually succeeded in pressing Pakistan to meet its conditions for levying tax on agriculture sector, enhancing energy prices and ensuring implementation of general sales tax.

According to General Exchange Companies Association of Pakistan Secretary, Zafar Paracha currency dealers feared that alarming increase would fan panic in market for dollars, causing a buying frenzy for greenback.

Saad Hashmi, Research Director for Topline Securities, was of the view that on state of foreign exchange reserves at SBP, the bank has enough fire power to bring the rates down. Bankers and financial experts have said that rupee value in currency market was already reflective of its position suggesting that there was no need for government to further devalue domestic unit.

An immediate devaluation has resulted disequilibrium in currency market as commercial banks had been offering high price of dollars and open market trading remained below official rates.

Malik Bostan of Forex Association said higher devaluation of domestic currency would deprive people of their purchasing power. The interbank market rate is the benchmark to evaluate dollar’s value, according to experts.

There is no immediate threat of insolvency to Pakistan as country would get more than $8 billion loan from friendly countries in near future.

On the import front, petroleum products being a major import commodity contribute 34 percent to the total imports. Presently, Pakistan’s 60 percent import is from China, excluding oil from the import bill, and Pakistan can resist this freefall of rupee by starting trade in local currency with the trade partners, including China.

The country has hardly two-month import bill payments, as forex reserves with State Bank are left at around $10.53 billion, nearly 9 percent less than one month payments. Commercial banks have around more than $6.3 billion forex reserves.

The IMF has also sought amendments to SBP Act in order to provide central bank with operational independence. The IMF also asked 100 basis points increase in the discount rate.