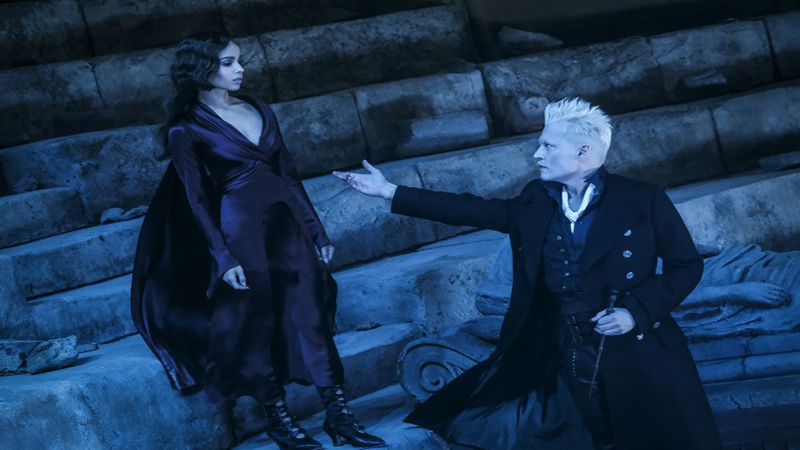 The much-awaited movie of the year ‘Fantastic Beasts: The Crimes Of Grindelwald’ is finally in cinemas. Despite mixed reviews from critics and the audience, the movie has garnered a total of $400 million within a span of just 10 days. The second installment to the film ‘Fantastic Beasts and Where to Find Them’ failed to live up to the expectations created by its prequel, despite exceptional star cast, including Johnny Depp who played the role of dark wizard Gellert Grindelwald. Rotten Tomatoes, the US based review-aggregation website for film and television gave the movie a score of 74. Film critic Andrew Barker of Variety said; “[It’s] the noisiest, most rhythmless, and least coherent entry in the Wizarding World saga since Alfonso Cuarón first gave the franchise its sea legs in 2004.” Polygon’s Karen Han put it best: “As it turns out, the true crime of Grindelwald was wasting the audience’s time.” The film shows the rise of Grindelwald. The movie further introduced some new characters, all of them connected to the Harry Potter world, but was short on magical spectacle; “There’s nothing particularly impressive about the CGI feats in the film… run-of-the-mill where modern blockbusters are concerned,” said Karen Han. One of the things that did not connect with the people was the sudden twists and turns in the new dark world created by J K Rowling, and a major criticism of the film was that there was too much going on. “The Crimes of Grindelwald throws an awful lot at the screen during this clotted two-hour-plus diversion,” wrote Manohla Dargis, New York Times. “Rowling has included so many different characters and sub-plots that the narrative momentum is sometimes lost,” said Geoffrey Macnab, The Independent.

The movie has glimmers of the magic familiar to Harry Potter fans, but the story’s spell isn’t as strong as earlier installments

The plus in the film was the acting performances from the star cast and the locations of 1920’s. Eddie Redmayne was adorable in his portrayal of Newt Scamander. “When [Newt] is allowed to lead this second story, it’s as whimsical and good-hearted as any in the franchise,” -IndieWire. “Newt remains one of the most distinctive heroes in blockbuster cinema,” – William Bibbiani, The Wrap. Dan Fogler, who played the role of non-maj, Jacob Kowalski and Alison Sudol as Queenie Goldstein were also lauded for their performances. “Queenie and Jacob often seem to be starring in a different, potentially more interesting movie,” Justin Chang, Los Angeles Times. Of the numerous new comers, the main standout was Zoe Kravitz, who plays the role of Leta Lestrange. “Zoë Kravitz as Leta is pretty fantastic and I love where they go with her character in the film,” Ashley Menzel, We Live Entertainment. One of the characters Harry Potter fans were most looking forward to see was Jude Law’s portrayal of young Albus Dumbledore. The actor’s portrayal of the beloved Hogwarts headmaster didn’t disappoint, with critics giving Law a thumbs up for his role. “Jude Law captures the quick wit, easy charm and cloying inscrutability of the character,” William Bibbiani, The Wrap. Meanwhile, the consensus on Depp’s portrayal of Grindelwald is divided. “Depp is also supremely average as Grindewald. He simply mails it in,” Robert Daniels, 812filmreviews. “Johnny Depp is instantly captivating as the titular villain and damn creepy, too,” David Griffin, IGN. Bagging on the success of the previous installments and the Harry Potter series, the movie has done well overseas and will surely collect more in the upcoming weeks. Even though the movie did not meet the high expectations of Harry Potter books and the First Fantastic Beast movies fans, the ending left many speechless with a mesmerising twist, ensuring that fans of the franchise will return for the movies’ sequel. “The twisty plot leads to an explosive climax…including a jaw-dropper for the Potterfaithful that’ll have them clamoring for the threequel,” Brian Truitt, USA Today.