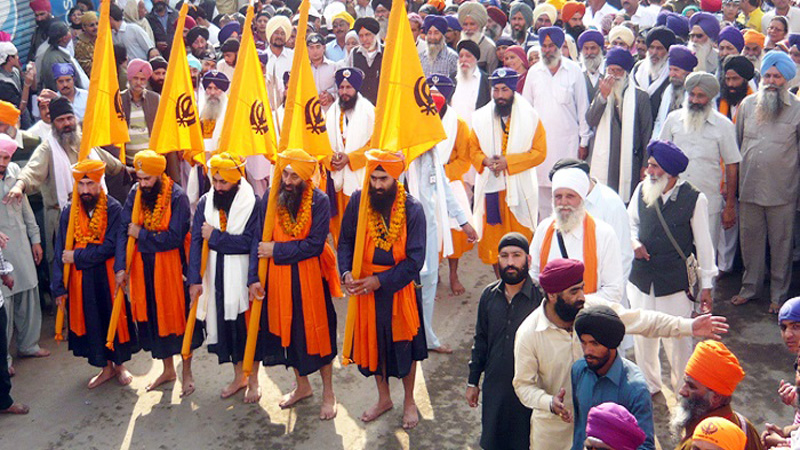 “This stained light, this night-bitten dawn –

This is not the dawn that we had yearned for,

This is not the dawn for which we had set out,

Hoping that in the sky’s wilderness

We would reach the final destination of the stars.

Surely, the night’s turgid sea will breathe its last

On the inevitable shore.

Surely, somewhere, the moorings of the heart’s agony

Will come to rest.”

At the time of partition, my father migrated from what is now the Indian part of Kashmir to settle in Sialkot. He would often talk about his Sikh friends there with whom he went to school and college. He was full of fond memories. The one thing that he would often highlight about the Sikh community was their deep sense of commitment to a cause, most notably friendship. They would remain steadfast under the most daunting circumstances.

Hailing from a warrior race, Sikhs are also recognised as tenacious fighters.

When Imran Khan invited three of his Indian friends, with whom he had played cricket, to his inauguration ceremony, it was only the Sikh among them who made it across the troubled border. Against heavy odds, Navjot Singh Sidhu responded in the affirmative to a call from his friend. And what a trip he had to Pakistan!

Every bit and every moment he was the Sikh that my late father had enacted them to be: frank, forthright, extroverted, exuberant, happy and dashing. He may have travelled to Pakistan with his stock of reservations, but he conquered everything that came his way. By the time he left after attending the inauguration ceremony and interacting with a host of dignitaries, he had won countless hearts. Even the most diehard pessimists who had long given up on the cause of peace between the two estranged neighbours started dreaming that, after all, there may still be hope for a thaw in India-Pakistan relations.

Of special note was his meeting, nay embrace, with the Chief of Army Staff (COAS) General Qamar Javed Bajwa. This was the moment the COAS offered to open the Kartarpur Corridor exclusively for the convenience of the Sikh community of India to visit their places of religious importance. Navjot was happy beyond what even his scintillating words could express. His feelings were writ large on his face. He just could not stop smiling!

In a tearful message, Sidhu thanked his friend Imran Khan and hoped that this initial step would bind the hearts of people across the divide and the path of peace would be lit.

Back in India, raw sentiments could already be felt from quarters which were unhappy at his having agreed to attend the ceremony. He confronted this unnecessary negativity with the trademark Sikh resolve and honesty that are typical of a person of his integrity. He pleaded the case of the opening of the Kartarpur corridor and wowed to fight for it every inch. When the criticism crossed some bounds, he even offered to resign from his position as a minister in the Indian Punjab cabinet. But, happily, the matter was resolved before that eventuality. The endorsement for opening the corridor finally came from the Indian cabinet.

This led to a spate of activity. The government of Pakistan decided that the prime minister would perform the ground-breaking ceremony of the project on November 28 and extended invitations to the Indian foreign minister and the chief minister of the Indian Punjab to come to attend the event. Navjot Singh Sidhu was also invited as a guest of the prime minister. The former two expressed their regrets, but the government of India designated two senior officials to represent them at the ceremony.

But, of course, Sidhu announced proudly that he would attend the ceremony to savour the fruits of his toils. He comes back to Pakistan as a proud man who fought his way through enormous opposition by remaining steadfast and committed to a cause that he and the Sikh community held dear. On behalf of Pakistan and its people, this is extending him a very warm welcome back to a country that cherishes his friendship.

We also savour the ardent hope that he has generated for a possible resurgence of India-Pakistan relations. It has been almost ten years since there was any substantive engagement on the bilateral front, with little light showing on the horizon either. It has been a downhill slide, washing away the hopes of even those who have a reputation of never giving up on the cause of improved bilateral relations.

Notwithstanding a good policy initiative by the government of Pakistan and Navjot Sidhu’s determined pleading of the project, India-Pakistan relations remain a mammoth challenge. There are sensitive issues which need to be addressed and resolved. Attempts have been made periodically in the past also, but it has never been an easy task, and will not be so this time around also.

The ground-breaking ceremony is just an event, but its significance far transcends the wildest dreams of a large number of people, across the fractious border in both countries, who never gave up on the idea of India and Pakistan living together in peace, working to the benefit of hundreds of thousands of impoverished and marginalised people, providing them space for hope and opportunities. This has been an enduring dream which has withstood four wars and numerous other acrimonious occurrences.

In spite of what India may say, in spite of what Pakistan may say, and in spite of what may have happened in the past seventy-one years, here is an opportunity that can transform the face of this landscape from one of confrontation to one of hope. This is a time that should not be wasted in talking of ways and means that would be appropriate to move further. This is also not a time to deliberate on trivial modalities and mechanisms. This is a time when people should come across fully determined to turn a new leaf in the chequered history of relations between the two neighbours, of two people who never wanted unending hostility to stand them apart from the comity of nations which have buried an acerbic past beneath tonnes of earth. The foes of yesteryears are the closest of friends now as was so poignantly demonstrated by that hug and hand-clasping of Emanuel Macron of France and Angela Merkel of Germany – two arch-rivals of the world wars, but working closely together today for the combined welfare of the European continent and their respective people.

Such should be the spirit for us to approach the India-Pakistan relationship. Nothing should hold us back. All levers should take us forward on the road to peace and tolerance. There is nothing inherently wrong with either of the two countries. It is what we have made of it with pangs of bitterness penetrating deep in our psyche. We have to get all that out and work with renewed vigour and resolve for attaining peace – for the sake of our two countries and the betterment of our teeming millions who long for every ray of hope, every provision of opportunity.

Let’s me also not fail the memory of my father who had faith in his friends back across the border that he dreamt of travelling to during his lifetime, but could not. He would definitely be smiling from up there that one from a community that he admired immensely and was close to has played such a significant role in recreating an opportunity of peace returning to a place that he loved. This is a moment that he should have been around to cherish. Father, you are missed dearly today!