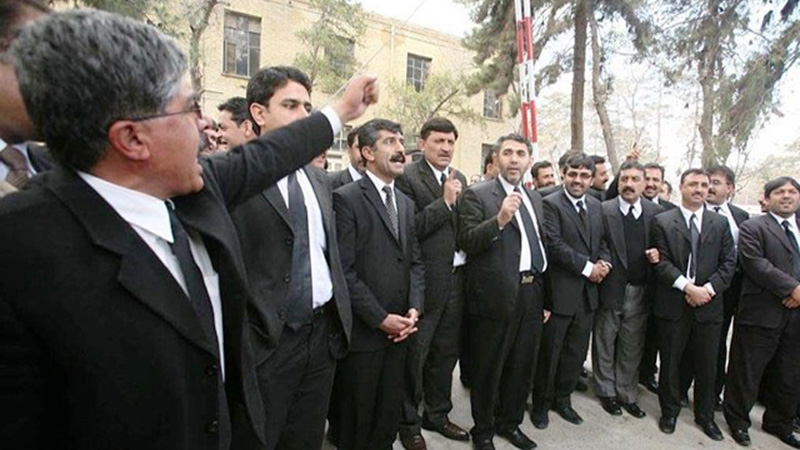 Lawyers of Gilgit-Baltistan will observe “Constitutional Rights Day” on Tuesday, (Nov 27) by abstaining from courts and organizing rallies and meetings.

The call for observing the day has been given by Gilgit-Baltistan Bar Council (GBBC) and bar associations, said an official statement of the Council.

Lawyers will not attend courts throughout GB and all bar associations will organize rallies, to record their protest and to highlight the seven missing decades of constitutional and fundamental rights of GB. A meeting of lawyers will be held in central hall of the High Court Bar Association (HCBA) Gilgit where senior lawyers will share the latest developments regarding constitutional cases of GB in Supreme Court of Pakistan. The lawyers have also invited judges to the meeting.

The lawyers of GB will not accept any so-called reforms only of administrative nature, commented Javed Ahmed, Vice-Chairman of GBBC.

Talking to this scribe, he said: “the constitutional dilemma of Gilgit-Baltistan could only be solved through giving provisional constitutional status to GB in the Federation of Pakistan as a unit as was recommended in Sartaj Aziz report. It is also a main plea of the lawyers of GB in constitutional petitions before Supreme Court of Pakistan.

“Bureaucracy and the Established must learn a lesson from the past mistakes and the separation of the former East Pakistan,” he cautioned.

“The sooner the constitutional status of GB is settled the better it would be for Pakistan and GB,” he suggested.

About the constitutional day protest, he said the lawyers would reiterate their firm resolve to continue their struggle for the attainment of the fundamental rights and status of GB through amendments in the Constitution of Pakistan by adding sub article 257-A in it.

Elaborating the GBBC plea in SC he said: “The territory of Gilgit-Baltistan shall be given a special province status through constitutional provisions in the 1973 Constitution, the provision of Article 1(2)(a) of the Constitution shall be made applicable to GB in relation to the territories of Pakistan, pending final resolution of Jammu and Kashmir dispute”.

This amendment would be the best way forward to implement the SC landmark judgment of 1999 on the status of GB; and being of provisional nature, it would have no prejudicial effect on Pakistan’s stance on Kashmir issue in the light of UN Resolutions, he argued.

By this constitutional arrangement GB would be entitled to equal representation and rights like other provinces in all constitutional forums whether financial (NFC, IRSA, CCI, NEC), or political (parliament and federal government), or judicial (Supreme Court of Pakistan), he added.

A seven-judge larger bench of the Supreme Court is hearing the petition and directed the government to submit its reply on the Sartaj Aziz committee recommendations by Dec 3.

On Nov 15, the Attorney General of Pakistan (AGP) Anwar Mansoor Khan had told the SC that the federal government had appointed a 10-member committee to examine the constitutional, administrative and governance reforms for Gilgit-Baltistan in the light of UN resolutions on Kashmir and the stand taken by the government at the international level.

The chief justice had reprimanded the AGP for failing to submit government response on the matter despite a lapse of 15 days and observed that the court would decide the matter on its own in case the government did not pursue it.

Barrister Aitzaz Ahsan, who was appointed amicus curiae by the apex court earlier, when asked by the CJP to give his expert view on the matter, offered a flimsy argument and said that in view of the sensitivity of the matter, the committee should be allowed to complete its task.

Salman Akram Raja, the counsel for the petitioner, objected to Aitzaz’s views and said that UN resolutions are not any hurdle in giving fundamental rights to the people of GB.

He termed Aitzaz’s arguments as “unverified, unwarranted and unsubstantial”. He said the UN resolutions and other international instruments in fact stress on ensuring fundamental rights to GB people including governing themselves through their elected representatives.

The petitioner and Vice-Chairman of GBBC Javed Ahmed expressed dismay at the stance of Aitzaz Ahsan and commented that PPP leaderships’ have contradictory stance on the GB status. He urged Bilawal Bhutto-Zardari to make public his party’s stance on GB and take notice of Airzaz Ahsan.

He also advised PPP regional chapter President Amjad Hussain Advocate to persuade his party’s senior leader on the constitutional petition of GBBC first, and then campaign for the struggle for ownership rights of GB. If he removes the contradiction between the stance of his party leaders, it will boost the legal struggle of GB lawyers.

He said that the party has been organizing big public gathering in the region since 1972 but it will not help resolve the constitutional status of the disputed region. He regretted that Mr Aitzaz has been advocating the Establishment’s stance of status quo taken since 1972 on every appearance in SC which is an attempt to delay the judicial process in reaching to a logical conclusion in ending the seven decades bureaucratic and colonial system.