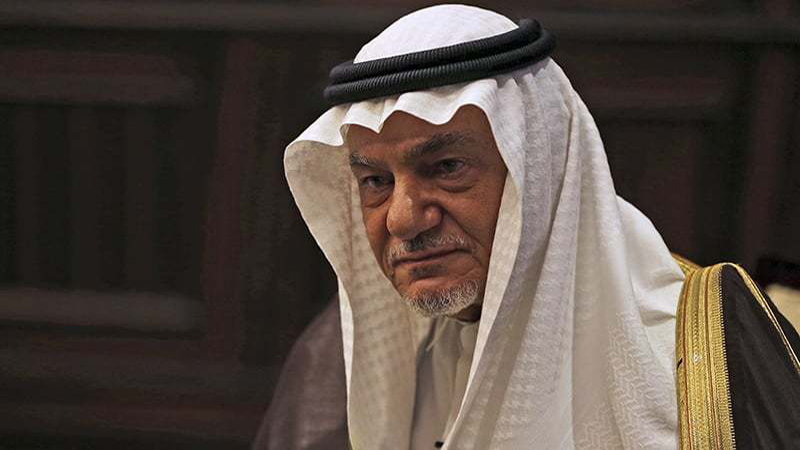 A prominent Saudi royal on Saturday said that whether or not heads of state gathered in Argentina next week for the Group of 20 (G20) summit warmly engage with Crown Prince Mohammed bin Salman, he is someone “that they have to deal with”.

Prince Turki al-Faisal told The Associated Press that the killing of Saudi writer Jamal Khashoggi in the kingdom’s consulate in Istanbul last month is “an unacceptable incident that tars and mars the long record of Saudi Arabia’s own standing in the world”.

“We will have to bear that. It’s not something that should not be faced. And we do face it,” he said.

Intelligence officials and analysts say the operation to kill Khashoggi, who wrote critically of the crown prince for The Washington Post, could not have happened without Prince Mohammed’s knowledge.

The kingdom, which has offered several conflicting accounts of the killing, denies the crown prince had any involvement.

The crown prince embarked late on Thursday on his first foreign tour since the October 2 killing with a visit to the United Arab Emirates.

He’s expected to visit other Middle East countries before going to Buenos Aires on Nov 30 for the start of the two-day G20 summit, where he’ll come face to face with world leaders.

United States President Donald Trump and Turkish President Recep Tayyip Erdogan, who has kept international pressure mounting on the kingdom, are among those expected to attend.

“Whether the leaders in that summit will warmly engage with the crown prince or not, I think all of them recognise that the kingdom as a country and King Salman and the crown prince are people that they have to deal with,” the prince said. He said Saudi Arabia will continue to play a role on the world stage and that Trump’s statement of support for Saudi Arabia recognises the importance of the kingdom.

Trump insists there’s not enough evidence to blame the crown prince for Khashoggi’s killing, despite a US intelligence report’s assessment to the contrary.

Trump says the kingdom is an important ally that has helped to lower oil prices.

“I thought President Trump was expressing what he felt was in the interest of the United States. He emphasised the strategic relationship between the two countries in the same statement and how Saudi Arabia has been helpful in many instances not just oil,” said Prince Turki. The prince also firmly dismissed the US intelligence assessments that the crown prince had ordered Khashoggi’s killing, saying these same intelligence bodies had a “remarkably flawed assessment” in 2003 in the lead up to the US invasion of Iraq.

“So we don’t take it as being, as I said, divine revelation,” he said of the US intelligence reports.

Prince Turki, who led Saudi intelligence for more than two decades and served as ambassador to the US and Britain, had links with Khashoggi before the writer became an outspoken government critic. Khashoggi was reportedly an adviser to Prince Turki at one point and supported by the royal during his brief stints as editor-in-chief of Saudi newspaper al-Watan.

The prince’s father is the late King Faisal and his brother is Prince Khalid al-Faisal, the governor of Makkah.

Prince Turki said that reports of discontent within the ruling Al Saud family over the crown prince’s rapid rise to power do not reflect the “extraordinary support” that King Salman and his son enjoy.

“I see no signs of such disquiet or uncertainty vis-a-vis the king and the crown prince,” he said.

The prince spoke on Saturday during a policy briefing by the Beirut Institute Summit.

The summit is the brainchild of Arab writer and columnist Raghida Dergham.

The prince is a board member and supporter of the summit, which draws upon recommendations of its participants to put forth policy ideas for the Middle East.

Among its recommendations is support for the Arab Peace Initiative, a Saudi initiative dating back to the early 2000’s that calls for east Jerusalem as the capital of a future Palestinian state including the West Bank and the Gaza Strip in exchange for Arab state recognition of Israel and normalized relations.

In the absence of peace talks between Palestinians and Israelis, Gulf Arab states have moved ahead with their own outreach to Israel .

The driving force appears to be shared concern over Iran’s expansion in the region.

Prince Turki, who himself appeared on a panel last year alongside a former chief for Israel’s Mossad spy agency, said such appearances do not represent a normalizing of relations with Israel.

“I don’t think it’s so much a rapprochement as, how can I put it, a shot by shot deal that rises as happened with the effort by the Sultan of Oman to push for a restart of the negotiations,” he said.