Abu Dhabi: UAE and Pakistan on Sunday stressed their support and cooperation to confront the scourge of terrorism and extremism that threatens the security and stability of nations and their people.

The two sides also discussed cooperation for regional and international efforts that contribute to security, peace, stability and development, and consolidating the values of dialogue, tolerance and co-existence in the region and the world.

The discussion between the top leadership took place on Sunday in Abu Dhabi during the official visit of Pakistan’s Prime Minister Imran Khan to the UAE.

While receiving the Pakistani prime minister at the Presidential Palace, Abu Dhabi, Shaikh Mohammad hoped that Imran’s visit to the UAE would boost the friendship and ties of cooperation between the UAE and Pakistan. This is the second visit of Imran to the UAE during the last two months since he became the prime minister.

Shaikh Mohammad stressed that UAE-Pakistani relations are based on a long history of joint work, trust, respect and mutual interests. He expressed his hope to continue developing these relations at all levels and aspects for the benefit of the two countries and peoples.

“The UAE, under the leadership of President His Highness Shaikh Khalifa Bin Zayed Al Nahyan is keen to consolidate its relations with friendly countries and expand them on the basis of trust, understanding, mutual respect and common interests to achieve sustainable development, peace and promote the values of coexistence and tolerance on the regional and global levels” Shaikh Mohammad said.

During the meeting, both sides discussed areas of cooperation, promising opportunities and various means of supporting and developing them, especially in trade, economic and investment.

They also discussed ways of boosting the UAE-Pakistani relations to wider future horizons of cooperation and joint action to achieve the aspirations of both countries and peoples.

They also reviewed regional and international developments as well as a number of issues of mutual concerns.

For his part, Prime Minister Khan emphasised his country’s drive to develop and strengthen relations further with the UAE across multiple sectors.

The two leaders affirmed their common interest in strengthening bilateral relations and partnerships, which serve the development and achieve prosperity for their peoples.

Writing in the VIP guest book at the Presidential Palace, Prime Minister Imran expressed thanks and appreciation for the hospitality extended to him and his accompanying delegation during their visit to the UAE, and wished the country further progress and development, as well as prosperity and welfare to its people.

Shaikh Mohammad also hosted a launch banquet in honour of the Pakistani prime minister and the accompanying delegation.

“The UAE, under the leadership of President His Highness Shaikh Khalifa Bin Zayed Al Nahyan is keen to consolidate its relations with friendly countries and expand them on the basis of trust, understanding, mutual respect and common interests to achieve sustainable development, peace and promote the values of coexistence and tolerance on the regional and global levels”

Earlier in the Day, Shaikh Mohammad received Imran Khan who was accorded an official reception where the Pakistani national anthem was played, and a 21-gun salute was fired in his honour.

Pakistani media earlier reported that Imran is visiting the UAE to seek economic assistance similar to that of Saudi Arabia to salvage Pakistan’s dwindling economy.

In September, Saudi Arabia had agreed to provide $3 billion (Dh11 billion) for one year as balance of payment support and a further one-year deferred payment facility for oil payments up to $3 billion. Economists calculated the impact of the support at $12 billion. 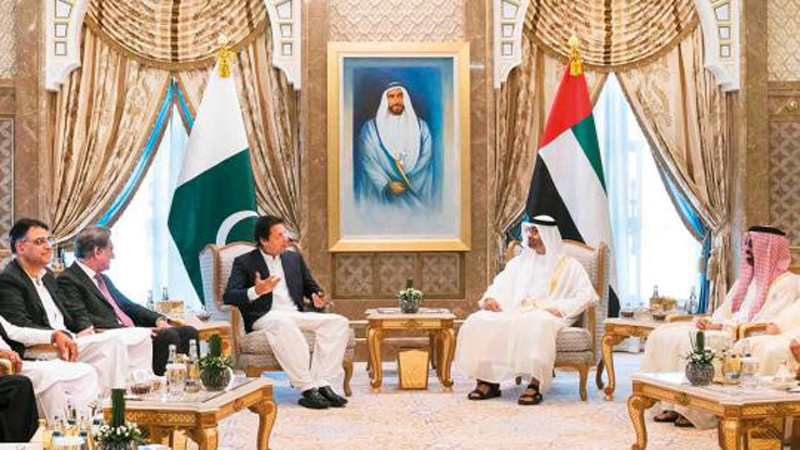 Last month, Qureshi had said that Pakistan had requested a Saudi Arabia-like deal from the UAE to stabilise the economy. Islamabad had earlier urged the friendly country to provide a ‘fiscal space’ to Pakistan amid the economic crises.

An IMF team is already negotiating the bail-out programme, likely to cover a period of three years.

The Institute of International Finance in its latest report said a potential IMF programme for Pakistan could be valued at $15 billion. The IIF expects an agreement on a three-year IMF programme of $15 billion by end of this year. However, Finance Minister Asad Umar now believes $6-7 billion from the IMF could settle the economic crises.