India’s crackdown in Kashmir: is this the world’s first mass blinding? — II

In the country’s present hyper nationalist mood, every kind of other is a suspicious figure, a ready-made scapegoat for any failure that befalls the politicians determined to make India great again: the secessionist Kashmiri, the impure Dalit, the traitorous beef-eating Muslim, the woman who speaks her mind, the anti-national journalist, the dissenting writer. Any voices who might call for a ban on these “non-lethal” guns are certain to be ignored. To the contrary, ministers and police, and their demagogues and cheerleaders, have continued to advocate the use of both pellets and bullets against protesting crowds in Kashmir: unruly cattle must be reined in at any cost.

Because Kashmiris have become accustomed to the violence inflicted on them — as they are to the indifference of the world — when pellets were first sprayed at protesters in the heated summer of 2010, most people processed this as nothing more than a new misfortune; just another element of the war in Kashmir. If one were to draw a diagram of the assaults inflicted on Kashmiri bodies over the decades, hardly a single part would remain unmarked: in the 1990s, when the violence was at its worst, the eyes were spared; now they seem to have become a favourite target. The victims of such tactics, consciously and not, cultivate reserves of tolerance for pain, but also a capacity to remember.

I remember, too. I grew up amid the darkness of the late 80s and early 90s. I remember that most of us teenagers innately understood that being abused, slapped, or beaten with batons and rifle butts by an Indian trooper was a bit of a joke when compared to the horrors that others endured in the dungeons of Kashmir. (One of the most notorious torture centres, Papa II — a colonial-era building on the banks of Dal Lake in Srinagar — was refurbished and redecorated, and served as the stately residence of the late pro-India politician Mufti Mohammad Sayeed. His daughter, as the current chief minister, now presides over the brutalisation of another generation of Kashmiri youth.)

I remember that the war in those years taught us to treat corpses and shrouds as reminders of passing time, which was measured for the young in massacres and assassinations. I recall, too, the tragic rupture in the Kashmiri body politic when an atmosphere of fear and loathing forced out the Kashmiri Pandits — a Hindu minority that had cohabited with Muslim Kashmiris for centuries — in an almost overnight exodus, many of them targeted and killed by separatist militants. Sanjay Tickoo, who runs an organisation for the welfare of Kashmiri Hindus, says: “Over the past 20 years, we estimate that 650 Pandits were killed in the valley.” I don’t know what happened to Sunil and Rajesh, my childhood mates from the primary school we all attended near an idyllic river bend in Verinag in south Kashmir.

Growing up, I experienced a brutal, bleak time, as India’s response to the uprising included the grotesque policy of “catch and kill”, under which combatants and non-combatants alike were dispatched in summary executions or tortured to death. And yet, I don’t remember such a vengeful assault on ordinary people as we are seeing now. Buoyed by a belligerent nationalist at the helm in Delhi, the security forces on the ground perhaps feel emboldened to unleash a more widespread cruelty.

In 2013, an affecting photo essay by journalist Zahid Rafiq in the New York Times documented a few of the stories of those who had been blinded by pellets. It remains a grim testament to the darkness in Kashmir — even though the blindings at that time, amid hundreds dead, did not attract too much notice. At the time, hardly any Indian civil society group or human rights organisation thought fit to speak up about such a wicked crime. The wanton demonisation of the Kashmiri Muslim, a project that some media organisations in India take particular pleasure in, was perhaps fully realised even then. It certainly is now, when thousands, fed on a daily diet of nationalist fury, take to social media to celebrate the killing, maiming, and blinding of young Kashmiris.

That the government in Kashmir — a collection of local elites comprising career politicians, technocrats, and chancers loyal to India — considers pellet guns a “necessary evil”, might make us feel grateful. At least they acknowledge the “evil” part — perhaps to address their own guilty consciences.

A few days into this summer’s uprising, the Kashmir Observer, a local English-language daily, reported that the local government had deployed a fleet of brand new ambulances to securely ferry visiting VIPs to picnic spots in the valley. This was while protesters were being killed, maimed and blinded — and while the ambulances carrying them to hospitals were coming under fire from security forces.

An ophthalmologist at the main hospital in Kashmir told the Indian Express in July: “For the first time the foreign bodies are irregular edged, which causes more damage once it strikes the eye.” Irregular, sharp edges? I had assumed that the pellets fired at protesters — like rubber or plastic bullets, were round discoid things. It turns out that there exist different kinds of pellets, and in 2016, some Indian forces are using the jagged variety — which inflict greater damage to flesh and eyes alike, and which doctors say is far more difficult to remove.

How did India get here? How is it all right for a constitutionally democratic and secular, modern nation to blind scores of civilians in a region it controls? Not an authoritarian state, not a crackpot dictatorship, not a rogue nation or warlord outside of legal and ethical commitments to international statutes, but a democratic country, a member of the comity of nations.

How are India’s leaders, thinkers and its thundering televised custodians of public and private morality, all untroubled by the sight of a child whose heart has been penetrated by metal pellets? This is the kind of cruelty we expect from Assad’s Syria, not the world’s largest democracy.

Historically, such an inhuman response to an uprising — to mass dissent — has been the province of empires and tyrants. A modern democratic nation rarely unleashes such violence, except upon victims whom it does not regard as its own people. It is quite clear that for India and its rulers, Kashmiris have been subjects and not citizens for as long as Kashmiris have refused Indian rule. You do not shower projectiles that target eyes and viscera on a people you consider your own. In snatching away the vision of Kashmiri children, the Indian state has decisively announced that it has only one message: you must be servile and submissive, and if you refuse, we will unleash our fury.

With a hubris derived from its might and military dominion over Kashmir, the state convinces itself that it has the power to inflict blindness. In no time, then, it blinds itself too — to the character of democracy that is its central founding principle. The harsh repression of Kashmiri protests, the Nobel prize-winning Indian economist Amartya Sen declared in July, is “the biggest blot on India’s democracy”.

It is hard not to see this mood of brutality connected, at the very least in its tenor, to the larger register of extreme violence, by both state and non-state actors, that has come to be normalised over the last couple of decades.

There has been some dissent in India. Journalists, activists, even some politicians, have written elegiac columns and essays on the savage response to the rebellion in Kashmir. They have implored their government to cease the brutality, to be kind, and to talk to Kashmiris. But it appears that the Indian government, clouded by a newfound chauvinism and a hunger for votes, is in no mood to listen to the nation’s voices of sanity.

In August, only a few days after Indian forces in Srinagar murdered a 21-year-old cash-machine watchman by firing 300 pellets into his body from close range, the Indian prime minister used a speech on Kashmir to taunt Pakistan over its own atrocities against separatists in the province of Balochistan, where the Pakistani army has inflicted forced disappearances and summary executions on the Baloch people. “Pakistan forgets that it bombs its own citizens using fighter planes,” he said. But Modi chose to forget that his own forces had, by then, killed scores of young Kashmiris. 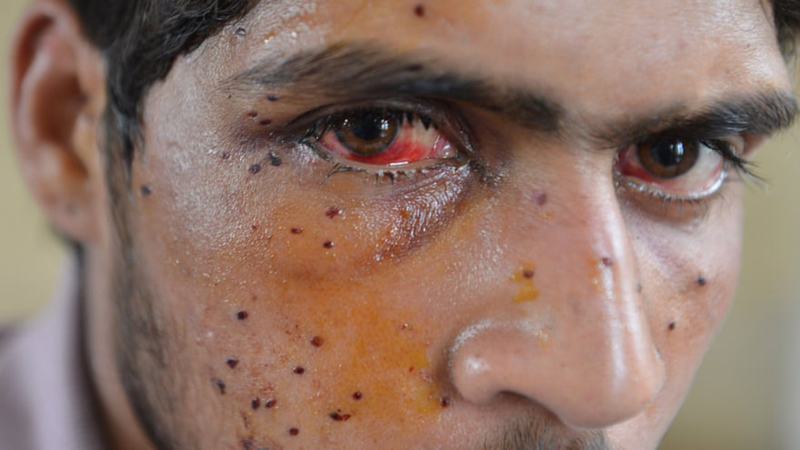 We need to interrogate the circumstances that have led to the deliberate blinding of hundreds of young people at the hands of armed forces in Kashmir, before this too is forgotten. As some of the wounded have begun to heal, some accounts have suggested that the damage may have been less severe than initially feared — that perhaps many of those who underwent eye surgery will regain “some vision” in at least one eye. This might make one feel better — relieved that its not worse — but there is something wrong with that kind of moral reckoning, akin to the Indian security officials who continue to maintain that pellet guns must be used because the alternative would be worse. One security official told an Indian news website that pellet guns had actually “saved lives”: “It is unfortunate that there have been eye injuries but the pellets are less lethal than getting hit by bullets.”

So we might ask: what if the armed forces stationed in Kashmir had fired live bullets instead? Imagine the death toll! But this doesn’t compute: in 2016, the security forces have already killed nearly 100 civilians. Is that an acceptable number?

In a year or two, as India, and Pakistan, continue to harp on their territorialist positions, there will arrive a season of surface calm — a “return to normalcy” — in Kashmir. People will shop, marry off their children, and celebrate an uncurfewed Eid. They will also welcome tourists in their blighted land.

But when this new generation of freedom-seekers grows up into blinded, maimed, adulthood, they will carry our guilt-ridden consciences for us. They will remember more than they have seen. They will certainly remember the country that did this to them.