* Rabbani says representatives of politicians, bureaucracy, armed forces and judiciary may be included in the commission
* Minister says Senate chairman's conduct not discussed in cabinet meeting 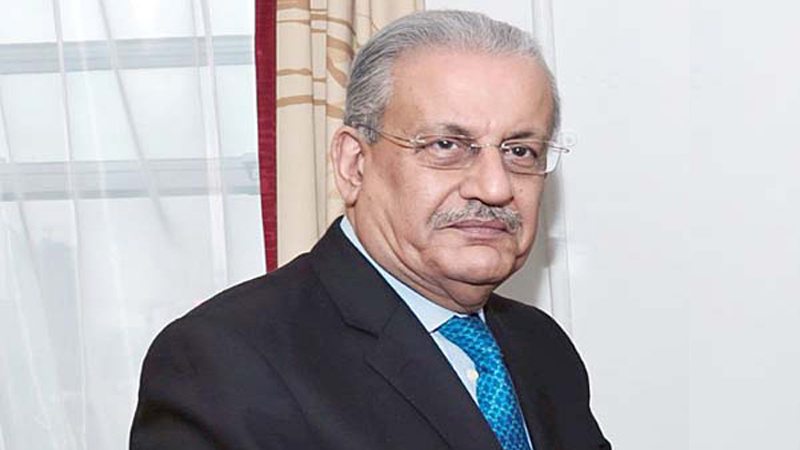 ISLAMABAD: While criticizing what he called ‘one-sided accountability’ in the country, Senator Raza Rabbani of the Pakistan People’s Party (PPP) Friday suggested setting up a federal commission for an indiscriminate and across-the-board accountability.

Speaking in the Senate, the PPP leader said the commission will include representatives from all stakeholders, including politicians, bureaucrats, armed forces and the judiciary. “NAB will also work under this commission which will decide if a reference has to be filed or not,” he said.

“Are politicians the only corrupt people in our society,” he asked. “One-sided accountability will not work here. Politicians are not the only ones who are corrupt. Unfortunately, everyone in the society including myself is corrupt. If there is to be accountability, let it be across the board. Let the judiciary be accountable … let the civil and military bureaucracy be accountable. But for this, we are not ready,” he said. “If you want the society to improve and eliminate corruption, the root cause needs to be addressed,” he added.

Rabbani was critical of a standoff between the government and Senate Chairman Sadiq Sajrani over Information Minister Fawad Chaudhry. He said in the past even a dictator didn’t have the audacity to say anything against the Senate chairman and National Assembly speaker. “Today aspersions are raised on the Senate chairman,” he lamented.

“The prime minister is elected to the office through indirect votes of National Assembly members,” Rabbani said while turning to acting Chairman Saleem Mandviwalla, and emphasized that he could not accept that the statements about the Senate chairman were made by the prime minister or the cabinet. “I cannot accept this because they [prime minister, cabinet] will not destroy the constitution like this,” he said.

In response to Rabbani, Minister for Parliamentary Affairs Ali Muhammad Khan said there was no discussion on the Senate chairman’s conduct during the cabinet meeting. “I am proud of Prime Minister Imran Khan who said in the cabinet meeting that he was willing to sacrifice his government but will not tolerate corrupt ministers,” he said, and emphasized that they were on the same page with Rabbani and would work together against corruption. “We will not let any damage be done to parliament.”

PPP Parliamentary Leader Senator Sherry Rehman questioned the government for shrouding its negotiations with the International Monetary Fund (IMF). “Talks were held between IMF and Pakistan. Big developments are taking place. The whole world is talking about it yet the opposition has no right to ask about the terms of the negotiation?” she said.

During the questions hour, the Senate was informed that government has increased import duties to cut imports. Adviser on Commerce Abdul Razzaq Dawood told the House that import substitution policy had also been launched in order to increase domestic production and exports. He said duties on raw material would be reduced in order to support and strengthen the manufacturing sector. He said oil import substitution is a long-term policy. He said refining capacity of the country has reduced over the years, due to which value added petroleum products are also being imported. He said once the refining capacity improves, the situation would stand changed.

Minister of State for Climate Change Zartaj Gul told the House that government has embarked on a plan to replicate successful model of Billion Tree Tsunami project all over the country. She said the government has a target of planting 10 billion saplings in its campaign. She said the provinces have been asked to prepare PC-1 to set their targets and records of planting the trees.

Gul said Karachi, Faisalabad, Lahore and some other major cities have high rate of air pollution. She said the Environmental Protection Agency is assessing the rate of pollution in these cities and taking measures to overcome it. She said juniper trees in Balochistan are a great asset for the province and that more saplings will be planted under the Green Pakistan program.

Responding to a calling attention notice, Zartaj Gul said government was taking comprehensive steps to tackle the issue of smog. She said traditional brick kilns are being closed as they use rubber tyres and other such material to burn the fire. The focus will be on setting up new brick kilns that are environment friendly and emit less smoke.

The House was later prorogued.