India: ex-policemen get life term for 1987 massacre of Muslims

A court in India has sentenced 16 retired policemen to life imprisonment for murdering 42 Muslim men in Hashimpura village in Uttar Pradesh state’s Meerut district in 1987.

On Wednesday, a bench of Justices S Muralidhar and Vinod Goel at the Delhi High Court reversed a lower court’s verdict, which had acquitted the accused.

The judges called the massacre a “targeted killing” of unarmed and defenceless Muslims by the police.

“The case is yet another instance of custodial killing where the legal system has been unable to effectively prosecute the perpetrators of gross human rights abuses … A disturbing aspect of the present case is the targeted killings of persons belonging to the minority community,” the court ruling said.

More than 30 years after one of the most brazen cases of custodial killings in post-independence India, families of the victims and rights activists said “justice” has been delivered.

On the night of May 22 in 1987, armed policemen rounded up dozens of Muslim men in riot-torn Meerut and shot them dead. Most of the bodies were found washed up in a water canal nearby.

“In our mohalla [neighbourhood] in Hashimpura today, sweets are being distributed. Everyone is celebrating the verdict,” said Mohammed Zeeshan, whose grandfather Mohammed Yasin was one of the first men to be shot dead.

Zeeshan’s father was also imprisoned and tortured by the police before being released.

“It’s been a painful, long wait for justice. Yet this news brings great happiness to us, a sense that finally truth has prevailed and some people will pay for murdering the innocents,” he said. 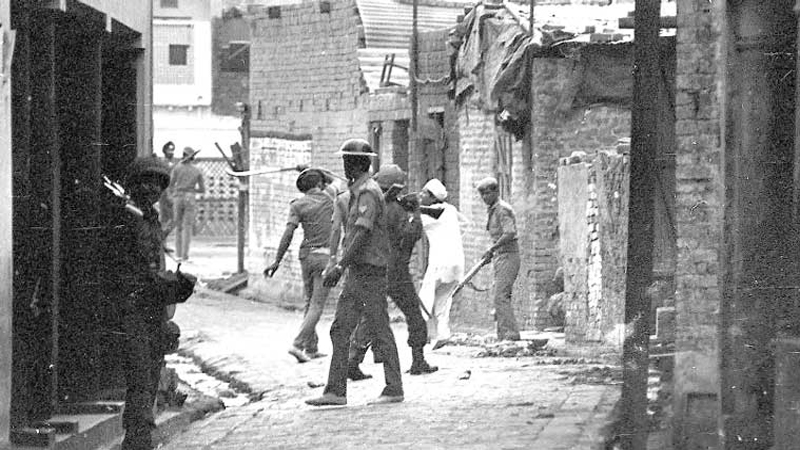 “There has been massive, shameful cover-up and communal bias by successive governments in this case. It is only the brave persistence of the survivors and their families which has resulted in today’s ruling. This is also a story of the fight for justice against all odds by poor working class people,” Mander told Al Jazeera.

“But the senior people, under whose command this happened and those involved in the cover-up, still remain untouched. It’s sobering to remember that today even in the midst of celebration,” he added.

The High Court was hearing pleas filed by the National Human Rights Commission (NHRC) and others, including a survivor of the massacre, Zulfiqar Nasir, to an earlier acquittal order by a lower court.

“They should have got the death penalty for their crimes. But we are overjoyed with the ruling today. It has come 31 years after the worst day of our lives,” Nasir told Al Jazeera from Hashimpura.

Nasir was shot in the arm during the massacre and says the darkness prevented the policemen from seeing he was still alive.

“That day, a lot of innocent people from my neighbourhood were picked up. Most of us were shot near a canal. The bullet hit my arm and when they threw me over the canal, the darkness prevented them from seeing I was still alive. I hid myself in the shrubs and escaped after the truck of the cops left,” he said.

Lawyer Vrinda Grover, who represented the NHRC in the court, said her biggest challenge was to seek justice despite questionable probe by state agencies in the case.

“The investigating agency and the state were all acting to protect the accused rather than represent the victims. We were saddled with a case in which the investigation was done in a manner where crucial pieces of evidence were suppressed,” Grover told Al Jazeera.

The Hashimpura case highlighted the “administrative collusion” with the Hindu right in India much before their ascent to power.

The pattern is now perfected with India’s police investigating victims and survivors of recent attacks by Hindu lynch mobs.

Over 80 percent of the Indian population are Hindus, while Muslims make up some 14 percent of its 1.3 billion people.

“It’s a landmark judgment at a time where there is so much pressure to conform to the ruling right-wing agenda,” Shabnam Hashmi, founder of non-profit group, Act Now For Harmony and Democracy, told Al Jazeera. “These murders happened with active connivance and participation of the state. The Muslims were massacred systematically and in a planned manner that day,” she said.