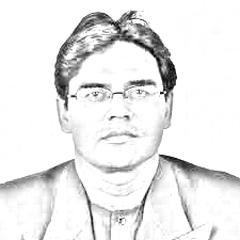 Rediscovering Peace through Ancient and Modern Silk Road: Stretching their lovesick arms out in the south-east and south-west of the Karakoram and Hindukush, perch the princely beauties of Pakistan and Afghanistan. This is the plateau where Himalayas, Hindukush, Karakoram and Tianshan mountain-ranges of India, Afghanistan, China and Pakistan intertwine. At the crossroads of Central Asia, the Magnificent Pamir Heights intercept the fabled towns of Kashghar and Turpan. Rapturous vineyards embellish the place since centuries. Crisscrossing glorious mountain-tops, Af-Pak possess legendary past, transformable from its contended arena to a blissful abode.

Uzbek, Tajek, Turkmen and Persians in Afghanistan while Sindhi, Siraiki and Punjabi across Pakistan enculturate their respective lands with music, poetry and mysticism while Hazara, Baloch and Pashtuns inhabit across Helmand and Hindukush imbued with the fiction and melodies of their tribal arrogance. Unique and diverse, as is the flora and fauna, so is the religion and rituals of these lands. Many a villagers still live in their republics of peace and piety without much concern with the power and proxy wars.

Utterly desired by this hour, let the bars and borders stay upon the map and let the people hearten from both sides to interact and engage. Let the railway run through Bolan; let the trams pass by Khyber Pass and let the terrains dance in exchange of love and folklore as would do the camel-led caravans of Taklimakan and burly horses of Farghana.

Despite the bicentennial grab and greed of ‘strategic possession’, Afghanistan is vivacious enough to aspire for its divine spirit of harmony and concord. Shook by political turmoil and terror, Pakistan too maintains its diversified ethos and poetic affection across.

Beyond bordering-conflicts and blaming-brawls, arts and civilizations plead people to embrace their past and present differently from the way it is thrusted upon by the powers-that-be. An inspiring story holds the power to dismantle hostile narratives and reframe relations from a cultural perspectives. Apart from other avenues, tradition may open-up windows of transverse travel and tourism too.

Despite the bicentennial grab and greed of ‘strategic possession’, Afghanistan is vivacious enough to aspire for its divine spirit of harmony and concord. Shook by political turmoil and terror, Pakistan too maintains its diversified ethos and poetic affection across

Overriding every odd, Silk Route once transmitted the fantasy tales of ‘thousand-and-one-nights’ from Euphrates and Tigris to Aras, Kabul and Indus civilizations. Clad in peace and pacifism, for over a millennium, the route kept transporting fiction and fables crossways till the seafaring replaced horses and camels. But so long as sun shines and winds blow, sargam and stories shall never stop crossing fences and check posts. Now struggling with itself and others alike, half a millennia ago, Afghanistan was a cradle of cross-cultural civilizations nurtured by the Silk Route treading.

Once upon time, a thin route from Kashgar twisted across our beloved Karakoram to run into the upper Indus down to the fertile plains of Ganges. Its south-western route ran through Wakhan corridor of Pamir to the present day Balkh and further down to the eastern edge of the Persian Empire. Traversing through sand-dunes and wind-worn-rocks, mercantile convoys, along with the commodities, also exchanged the words of wisdom. Traded through the same route, Chinese Silk was so precious that it was literally weighed in gold while stories walked around for free.

Ancient Kingdoms of Samarkand and Bukhara, Neshapur and Tabrez as well as northern valleys of Pakistan to Constantinople honoured narrators and rhymesters voyaging along the same route. After all unfamiliar lands and exotic people divulge stories, unforgettable.

The present day Pakistan is would then listen Chinese fables, they in-turn Tajek, Uzbek and Persian. And Persians would turn their ears to the people in Cairo, Damascus and Baghdad and they to the Israelites — all enriched with the wondering experiences of Silk Route. Fostered in Taklimakan and Gobi desert, the double-humped, long-eye-lashed camels carried loads of silk, saffron and scent to the oases of peace and pleasure. In return of silk, Chinese would saddle in the superior Kyrgiz and Kazak horses. However, dismounting from the horses backs poetry would settle in the camps and courtyards of queens and viziers, and all around.

Flying on the wings of fire, the prophet Zoroaster delivered one of his most compelling sermons here in Balkh, 3500 years ago. His notion of individualism and free will, and of truth, reason and justice is the soul of several faith till today. Human person, suggests the master, possesses the ability to judge ‘what is good’ and ‘what is evil,’ by the virtue of ‘reason’. His unacknowledged wisdom deeply permeates into the ancient and present day Af-Pak and Indo-Persian traditions — both religious as well as cultural. In Zoroastrian homes, one can find Bible, Gathas and Quran all courteously placed side by side. Rolling on the Silk Road, Islam approached Xian (China) in the 10st century. Reminiscent of the age, here stands the famous Qin-Qing-Si mosque.

With the blessings of Silk Road, Afghanistan possessed rich heritage and culture. Engulfed by the war dust, Kundus, Bukhara and Mazar Sharif still maintain their plurality and lively attitudes. With their songs and stories, wordsmiths and versifiers ornate the nights of Herat, every Thursday. Even if tormented by fire and fury, soul never dies.

Minuscule in number, Sikh and Hindus also live in Afghanistan. Zablon Simintove is ‘the last Jew’–a carpet-trader and care-taker of the only synagogue in Herat. With his death Afghanistan will lose a vital chunk of history. Masal, the only Japanese woman and exclusive Tsuchi chef who made Bamyan her home since 1980s, runs a famous ‘Hotel Silk Road’ here.

Rumi — the greatest of all mystic poets — was also born and received his early instructions in the 12th century Balkh. It is relevant to quote him:

“Dance, when you’re broken open. Dance, if you’ve torn the bandage off. Dance in the middle of the fighting. Dance in your blood. Dance when you’re perfectly free.”

and: “Where there is ruin, there is hope for a treasure.”

In the foothills of Hindukush, survive the polytheistic Kalasha in Bomborit and Birir valleys. Claiming the Greek descent, their twirling festivals are adored all over the world. Across Indus, gods, if not Greeks, did fly to make Himalaya their home. In its’ southwest, once prospered the Gandhara civilisationin Swat, Taxila and Peshawar. Its crafts and creativity influenced the entire Buddhist civilization. Gautama’s hymns and stories were inscribed in stone. From the 1st to the 5st century, the place has been attracting Buddhist pilgrims from as far as China and Far East. No surprise, the largest Buddhist community of the subcontinent lived in East and West Pakistan till 1971. Built upon Buddha’s sacred relics, four of the holiest stupas stand in Gandhara till today. Innumerable Buddha sculptures and monasteries have been discovered from these valleys. Monks from north and southeast yearn to visit the venerated venue but only if the Government of Pakistan know its’ sanctity and significance.

Losing the benevolent Buddhas at the hands of Taliban, Bamyan has lost the watchful Buddha eyes gracing the pilgrims for centuries. The two resembled the 4th century Chinese Buddha’s of Bing-Ling-Sue. Traces of Indo-Chinese norms are still alive there. Bamyan was a stop-over before the Silk Route caravans moved into the desert of Taklimakan — which unbelievably sizzles in the day and goes freezing in the night.

Ahead of Karakoram, wives and women in Xian would intone verses and perform rituals of willow branches at the Yellow River for the safer return of their loved ones. In the words of Wan Weyn:

“The travellers’ willows, tokens of fresh and green, by offering you a twist for you are departing towards the setting sun. Soon you will be part of the past”.

Buddhism, as did Islam and Christianity, changed while ensembling with the cultures and lifestyles of the local genera. Since 8th centuries onwards, Islam began influencing people’s lives here. What needs to be revoked is the goddess of love and harmony to disassemble the armies of hatred and hostility.

Sadly, the ancient Silk Route is disappearing into the dust of dams and dusk of time. However, the New Silk Road is already coming-up and evolving to play a similar role. Afghan-Pak region holds enormous possibilities to become a hub of ideological and economic exchange. The New Silk Road can effectively transcend the tales of past and present a better future.