COLOMBO, Sri Lanka — The president of Sri Lanka dissolved the country’s Parliament on Friday night and called for elections in January to choose new lawmakers, a move that critics said was illegal, and that deepened a two-week-old constitutional crisis over who is the legitimate prime minister of the island nation.

The move followed President Maithripala Sirisena’s dismissal in late October of Sri Lanka’s prime minister, Ranil Wickremesinghe, and his naming as a replacement a popular former president who had been accused of human rights abuses, nepotism and excessively close ties to China during his tenure.

Mr. Wickremesinghe and many members of Parliament challenged the appointment of his successor, Mahinda Rajapaksa. No major foreign country, including the United States, has recognized the new government. They have urged Sri Lankan leaders to allow Parliament to choose between the two men.

Sri Lanka, strategically located off the coast of India, is deeply in debt to China and was forced to turn over control of an important port to that country. Its close ties to China have alarmed both the United States and India, which fear China’s growing influence in the region.

Mr. Sirisena justified his removal of Mr. Wickremesinghe by saying that he was corrupt and that a member of his cabinet had plotted with India to kill Mr. Sirisena. He temporarily suspended Parliament but then agreed to reconvene the 225-member body on Nov. 14. At that time, lawmakers were supposed to choose between the two rivals for prime minister.

On Friday, a spokesman for Mr. Rajapaksa acknowledged that his party did not yet have enough support to win that floor test. Hours later, Mr. Sirisena signed papers that dissolved Parliament and called for elections on Jan. 5 to choose new lawmakers. 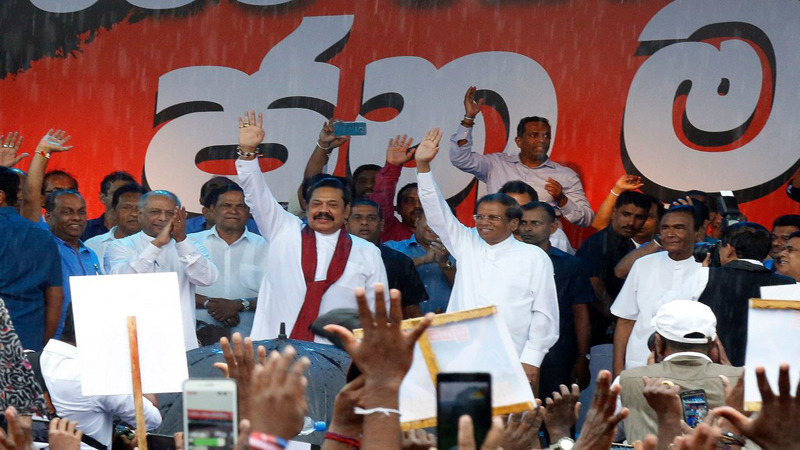 The brazenness of recent moves — including claims that Mr. Rajapaksa’s supporters offered hefty cash bribes to entice opposition lawmakers to switch sides — led some to complain that Sri Lanka’s democracy was regressing to the strongman politics that dominated during Mr. Rajapaksa’s decade as president.

“The political darkness of authoritarianism is engulfing us once more,” said Jayadeva Uyangoda, a professor of political science at Colombo University, in a lecture on Thursday.

Mr. Wickremesinghe’s United National Party said the dissolution of Parliament was unconstitutional. “We will be fighting this to ensure that democracy reigns supreme in the country,” the party said in a tweet.

Ajith Perera, a lawmaker from the United National Party, said that it would urge the independent Elections Commission, which would oversee any voting, not to conduct any elections. “We are appealing to the Elections Commission to resolve this issue without bloodshed,” he said.

While Mr. Rajapaksa’s party, the Sri Lanka People’s Front, does not have deep support in Parliament, it performed very well in local elections in February. It would most likely win any parliamentary election held now amid popular discontent with the struggling Sri Lankan economy.

Mr. Rajapaksa’s brother and the country’s former defense secretary, Gotabaya Rajapaksa, said in a tweet: “The genuine power of the people should deliver a stable and progressive future at this critical juncture of our nation. I am confident that the people of Sri Lanka will make the right choice.”

The issue is very likely to end up before the Supreme Court, with Mr. Wickremesinghe’s party and citizen groups already preparing petitions challenging the dissolution of Parliament.

The country has been in political gridlock since Oct. 26, when Mr. Sirisena dismissed Mr. Wickremesinghe, an electoral ally since 2015, and swore in Mr. Rajapaksa as the new prime minister.

Before the 2015 elections, Mr. Sirisena had been a cabinet member in the government of Mr. Rajapaksa, a former president who had been accused of corruption and human rights violations during the country’s long civil war against Tamil separatists.

Mr. Wickremesinghe has refused to leave the prime minister’s residence in Colombo, the nation’s capital, and his ministers claim that they remain the country’s lawful government.

Jayampathy Wickremaratne, one of Sri Lanka’s most senior constitutional law experts, said that a constitutional amendment — championed by Mr. Sirisena and passed in April 2015 — allowed the dissolution of Parliament only after four and a half years of its five-year term, or upon the request of two-thirds of the members. The next regularly scheduled parliamentary elections is August 2020.

Mr. Sirisena cited a different provision of the constitution in dissolving Parliament on Friday and calling for elections sooner.

The military has remained silent during the two-week power struggle. Thousands of supporters of each side have rallied in the streets of Colombo, and at one point, the bodyguards of one of Mr. Wickremesinghe’s ministers fired into a crowd, killing one person and injuring two others.