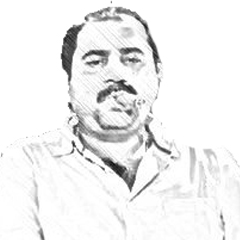 Headlines on media are screaming out these days that,” Smog over Punjab as farmers burn stubble”. This is a very easy point of discussion for the urbanites but an entirely misplaced narrative

Climate Change is a fact; it is a phenomenon we are dealing with since more than the last decade but another issue which had not emerged as a priority in the last few years, is of pollution in Pakistan.

Pollution started getting its place in the centre of the debate in Pakistan after a report by the Lancet Commission, published in October 2017. The report claimed that almost 22 per cent of premature deaths in Pakistan are attributable to pollution and annually these were approximately 300,000 in number. That report actually raised a question on the performance of the government authorities over the measures taken against the relevant industries and institutions.

Headlines on media are screaming out these days that,” Smog over Punjab as farmers burn stubble”. This is a very easy point of discussion for the urbanites but an entirely misplaced narrative.  It is very important to discuss the basic causes of smog before targeting the farmers on this very serious national issue. Before going directly to attack farmers for causing smog it is important to just look and track the pollution and primary causes of smog not only in rural but urban areas.

We usually experience the smog issue at the start of winters and it remains until the rains come. The basic hot and cold air theory may help us to understand this phenomenon. During summer, for heating, lesser amount of biomass is burnt and the hot air lifts pollutants to higher altitudes and wind disperses them. In winters, the situation is different, because of the cold air, pollutants stay nearer the ground, a considerable amount of biomass is burnt, mostly for heating, and, of course, there is also stubble burning. When these pollutants and the particles in the air along with exhaust smoke mixes with fog, it becomes the smog.

But the question is, are the famers causing this problem? My answer, as a farmer would be a firm No.

People should understand that other than seasonal variations and weather conditions, most of the pollution is due to the exhaust fumes of substandard fuel in transportation specially the diesel, industrial pollution and burning at garbage dump, large scale construction, substandard burning materials like, shoes, coal, wood, rubber and plastic in brick kilns, coal burning for power generation and surely overpopulation. So, if these are the causes of pollution and smog in winter season, how can farmers only be targeted for the stubble burning?

It is a fact that the stubble burning by farmers is visible and it always draws attention. Since 2013, NASA is also tracking this problem and sharing the satellite images from the space, capturing the clusters of stubble burning in Indian and Pakistani Punjab provinces but we should understand the stubble in winter is burned during only the few weeks from late October to mid November.

It is a fact that the problem becomes worse during this short period because the deadly PM 2.5, (particulate matter) reach high peak values. But farmers are not the only reasons for this pollution, burning of rice residue actually become visible and looks like adding fuel to the already existing pollution particles in the air. If we really want to point out the big sources of pollution, farmers should be at the end and the main focus should be on vehicles, industry and brick kilns.

Imposing section 144 by the government is not the solution to tackle issues like smog, it is viewed as a threat. Government should work on future policies after taking farmers on board

Farmers are not against the government policies. Even the community really understands the worse impacts of smog on not only human as well agricultural health. Smog not only disturbs the human health in context of the respiratory diseases but also disturbs the quality as well as quantity of the crops, resulting in lower yields, leading to financial losses to the farmers.

Problem is, managing the rice residue is not an easy task, specially the harvested crop through combine harvesters. Already disturbed due to the higher production costs and the less return of investment, farmer cannot afford to manage the residue and go for burning instead. Machines like rotavators and disc harrows are available in the market but they cannot mix the rice stubble in the land until it is decomposed after watering and using fertilizer which not only increases the production cost of the next crop but also delays sowing of the next crop, resulting in low yields and poor quality.

The government has imposed section 144 on stubble burning by the farmers on October 1, 2018 but the brick kilns (who are among the major contributors of pollution) have been given relaxation till November 3, 2018. Due to this it looks like farmers are really being made the victims by the government.

Through this article, I would like to suggest to the government that imposing section 144 is not the solution to tackle the issues like smog. It is viewed as a threat. Government should work on future policies after taking farmers on board.

At the moment the government should offer incentives and subsidies to farmers for stubble collection to maintain their production cost of the next crop, identity the industry like paper, packaging and energy using crop residue and last but not least provide them bailers and machinery to save the stubble for the use in domestic energy requirement and feeding the livestock at the household level.

If we want to have productive output from the farmers, government should take farmers onboard while making policies and finding solutions to the problems like smog instead of threatening.

The writer is a farmer and Member of district Council. He can be reached at aamerht@gmail.com. He tweets @AamerBhandara