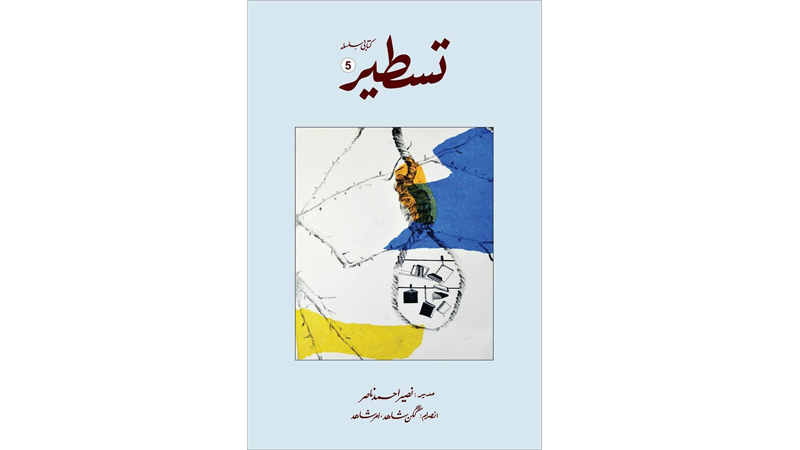 Buying 700 pages of latest literature in eight hundred rupees is not a bad deal as far as literary content is concerned but still it is a price not affordable by te common man. While going through these pages, I keep on wondering as to how such voluminous edition appears regularly as it is not a sponsored literary magazine, with zero vocabulary mistakes. The credit must be shared by Editor Naseer Ahmad Nasir and his assistants Gaggan Shahid and Amar Shahid. The title cover comprises painting by Mahnoor Asad who first saw Tasteer in her mother’s (Salma Asad) hands. Then she met Naseer Ahmad Nasir and like his personality. She inherited the art of painting from her father late Asad Malik.

Guest editorial has been written by Sanober Altaf. She questions as to why we do not create literature. It is a general perception that literature is created by the passion of the writer and he/she transforms his/her emotions and sentiments onto paper. Later it was discovered that a writer’s experiences and observations are also joined hands as part of the creation. The editorial contends that as far as Urdu literature is concerned there is dearth of academies, teaching institutions, tea houses, libraries etc. in abundance where modern trends are seen and discussed. This reviewer is aware in Lahore of Oriental College, Government College University and FC College University etc., with strong faculty and Urdu Master’s degree and post graduate programmes but how far are these connected with latest and modern trends in Urdu literature, only recently graguated students can tell. Still we meet people in everyday life who are disgruntled with the standard of Urdu literature; novel writing, short stories writing or criticism. The question then arises as to whether we have books available at affordable prices for students to identify as to what and when to read. To top it all, generally speaking the trend among youngsters is that they do not feel the necessity of the need of a proper teacher, necessary exercises or conscious effort. Learning from senior generation needs to be encouraged to create a quality creation. In this reviewer’s experience he has seen parents, mostly mothers taking their kids to the libraries in their areas to draw books at least once a week in the US and Canada.

Reactions on the editorials of the previous Tasteer issues are a healthy trend set up by te publication. Dr Rasheed Amjad in his submission observes that a good poem in neither modern nor obsolete. It is recognized by its spirit. (Page 23). Dr. Ghaffer Shahzad on the other hand gives the example of poet Majeed Amjad that if his poem was attributed to the old age civilization, it also produced poems such as ‘Main Nei Usko Daikha Hei’ (I’ve seen him) on Manto and ‘Autograph’ on cricketer Fazal Mahmud. The latter two were phenomenon of twentieth century (Page 24).

In the section titled ‘Lams-e-Rafta’ (touch of the past) Shams Ur Rehman Siddiqui gives his impressions on Irfan Siddiqui’s Ghazal. There are seven other essays including Parveen Tahir’s ‘Pooeri Zameen Ka Aadha Sach’ (half-truth of whole earth). It is a poem remembering Professor Yousuf Hassan. This is followed by a dialogue with Jalil Aali and conversation by Dr Uzma Saleem on the childhood memories of Nazeer Qaiser and Absar Abdul Ali. I have come across the latter in the studios of Radio Pakistan umpteen times. He was born in Lukhnow on September 11, 1940. He falls as ninth among ten brothers and sisters. His maternal side hailed from Amroha. As a broadcaster and writer he gives credit to his family for encouraging him to read books in his childhood. A very interesting travelogue of Spain titled ‘Teen Chuhian Ghar Sei Nikleen’ (three mice out from their holes) by Salma Awan is by Salma Awan accompanied by her two mates.

Irfan Shahud enters into the magic of the story of Sassi with Punhal while entering Gharo Creek in Sindh in his article titled ‘Sassi Ka Sheher Aur Dabel Ka Qilla’. Sassi was a Brahman child who was floated in a box in a river by her father due to his suspicious religious beliefs. The child is rescued by Ahmad, a washer man who named her Sassi (resembling moon). Prince Punnoo falls in love with her. They get married but Punnoo’s brothers abduct him and take him away. Sassi looks for him in Thal deserts and dies in Armabeel. Punnoo also dies. This story is folklore now (Page 124). Brief travelogues are contributed on Mubarak Village, Jassar Railway Station, Haveli Sardar and Kot Daichi by the same author.

Section of Afsana (short stories) is a large section (Page 133 to 289) comprising 34 stories. The story ‘Yaad Daasht Ki Talash Main’ (in search of memory) – Page 211 by Muhammad Jameel Akhtar is based on dementia patient who loses his short time memory. He forgets to paste a ten rupee additional ticket on a letter he intends to post somewhere. It is a story of a man with low income who walks eight kilometers to save the money. On te way back he forgets his house address. A rickshaw man helps him to locate his house. When back he is scolded by his wife for wasting time and money. He starts crying due to his plight sitting at a corner. She is appalled by finding that he had no soles on his shoes. This story clearly depicts the low income group’s financial burden, wives not cooperating, finally ending up in ill-health of the male bread earner.

Tasteer has short stories based on varied themes. The story ‘Amman Ka Wa’ada’ (mother’s promise) – Page 202 by Farkhanda Shamim is about a mother’s promise to her son that he shall not hear of any complaint from her about his wife. On her insistence his son agrees to a match selected by her. After marriage she discovers that her daughter in law was I having an affair. She runs outside her home crying why her son had sealed her lips not to complain. She falls and dies with her promise remaining sealed on her lips. Two Afsana Numa (something like a short story) have been contributed by Aisha Aslam Malik and Samina Ashraf, A section ‘Micro fiction’ comprises fiction by Syed Tehseen Gillani and Hameed Raja Tilhaar Sindh.

Long poems are contributed by Haris Khaleeq, Farukh Yaar, Bushra Ijaz, Sultan Nasir, Ammar Iqbal and Sidra Afzal. Farukh Yaar develops a poem of his meeting with his father and grandfather in a poem titled ‘Pehli Pohri’ (first step) – Page 306. It is a story of apprehensions and suspicions. As expected from Naseer Ahmad Nasir the strongest section in Tasteer 5 is that of Nazms (poems) – Page 323 to 394 by Gulzar, Tabasum Kashmiri, Amjad Islam Amjad, Abrar Ahmad, Anwaar Fitrat, Parveen Tahir, Saleem Shahzad, Fahim Shanas Kazmi, Saleem Ansar, Arifa Shahzad, Aalia Mirza, and dozens of other poets. Gulzar is wondering as to why he finds the same face in her poems despite that all poems do not mention her – poem titled ‘Dark Room Ki Red Light Main’ – Page 323.