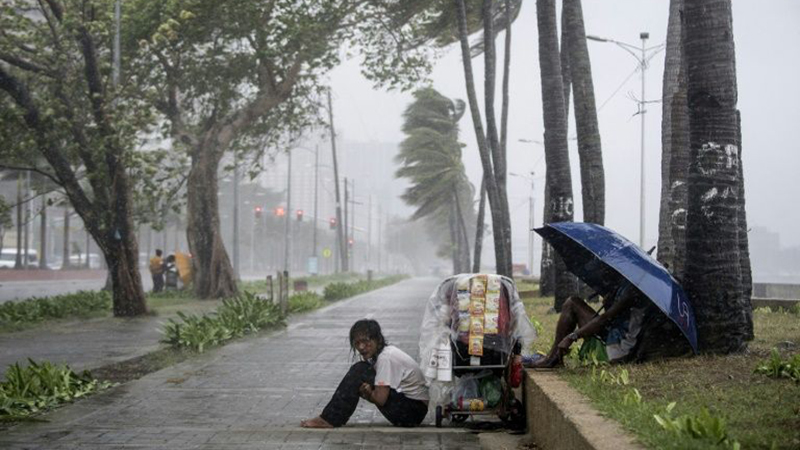 Philippine rescuers used hand tools on Wednesday in a desperate search for around 20 people buried in a landslide unleashed by Typhoon Yutu, as the powerful storm’s toll rose to nine.

When Yutu struck on Tuesday, torrential rains sparked floods that washed away bridges and fierce gusts razed hundreds of flimsy homes in the nation’s north.

Crews were struggling to sift through the wall of mud that smashed into a public works compound where labourers and locals had taken refuge in the Cordillera mountain community of Natonin.

“They (searchers) are digging manually but they still cannot penetrate (with heavy equipment),” provincial disaster official Edward Chumawar told AFP. “The clearing operations for road access there are ongoing.”

Five people had been rescued and three corpses found at the scene, with another roughly 20 people still unaccounted for in the compound.

Dramatic images shot on smartphones emerged Wednesday of swollen, churning rivers and a large concrete bridge washed away by floodwaters.

The howling winds picked trees clean of their leaves in certain areas, and sliced the corrugated metal roofs off homes.

Crews have begun fanning out across the storm’s path on the Philippines’ most populous Luzon island to count the cost of the typhoon which struck with sustained winds of 150 kilometres (95 miles) per hour and gusts up to 210.

Most of the other deaths in the storm came due to landslides in hilly areas, including ones that took the lives of a father and his three young children, a 5-year-old girl and a man, police said.

Cutting a path just south of last month’s Typhoon Mangkhut, the new storm hit a region still reeling from the last one.

However, Philippine disaster officials said the typhoon was less powerful than Mangkhut, which left more than 100 dead.

Most of the fatalities from Mangkhut were due to a landslide in the mining area of Itogon.

At least 1,000 people were evacuated from slide-prone areas in Itogon ahead of the storm, and about 9,000 more fled their homes near waterways.

An average of 20 typhoons and storms lash the Philippines each year, killing hundreds of people and leaving millions in near-perpetual poverty.

The Philippines’ deadliest storm on record is Super Typhoon Haiyan, which left more than 7,350 people dead or missing across the central Philippines in November 2013.