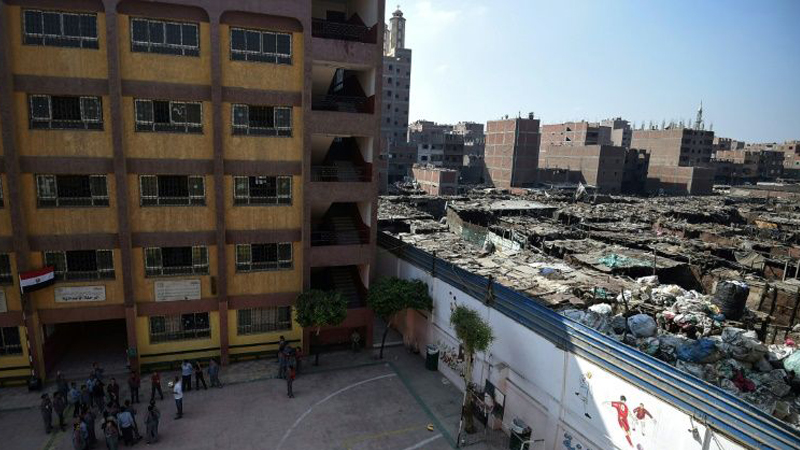 Among the poorest of Egypt’s poor, the so-called “zabbaleen” who scavenge through garbage to eke out a living in a Cairo slum struggle to keep their children in school.

Residents of the Ezbet al-Nakhl shanty town earn a living from rubbish they collect across the capital and sort in privately-owned recycling workshops.

But a school in the midst of the unpaved muddy alleys in the mostly Coptic district of the zabbaleen, meaning the garbage people in Arabic, has long been something of an oasis.

Set up 30 years ago by French nun Sister Emmanuelle, the Mahaba School — taking its name from the Arabic word for love — shields around 3,000 pupils from the outside world in a clean and friendly environment.

The walls of its classrooms are brightly decorated with pupils’ work, and football posts with a net stand proudly in the playground.

The Vatican once compared Sister Emmanuelle to Mother Teresa for her charitable work with slum dwellers.

The founder died 10 years ago at the age of 99, and the school is now run by Sister Demiana.

Sister Demiana recalls how she and Sister Emmanuelle went door to door urging parents to enrol their children in a bid to fight illiteracy.

Today, around 20 percent of Egypt’s population are illiterate, the state-run CAPMAS statistics office said in a report released last year.

Mahaba and other slum-based education initiatives have found it especially hard to make ends meet in recent years, due to a financial crisis in Egypt.

In 2016, the government signed a $12 billion three-year loan agreement with the International Monetary Fund to support a string of economic reforms.

Since then, authorities have imposed harsh austerity measures, including hikes to fuel and electricity prices, and adopted VAT.

Consumer prices have soared and the Egyptian pound has lost more than half its value against the US dollar since the central bank floated the currency in November 2016.

And a fiscal crisis saw the deficit balloon to 12.5 percent of Gross Domestic Product in the 2015-2016 tax year.

Around 28 percent of Egypt’s 96 million inhabitants were living under the poverty line in 2015, according to official figures which have not been updated since.

But experts say the reality on the ground is even worse.

“Everything has become expensive and people are feeling the pressure,” said Sister Demiana.

Many of the children who attend Mahaba School are malnourished and their parents struggle to buy them clothes and school supplies, she said.

But the poorest families do not have to pay, while those who are slightly less poor pay only a token amount.

The school is part-funded by Asmae — the NGO set up by Sister Emmanuelle in 1980 that sponsors 200 pupils.

“The main challenge is (for the parents) to find money” to pay for their general needs, said school teacher Sabah Sobhi, who has worked at Mahaba since it first opened.

“Life has become very expensive and families are finding it hard to keep their children in school,” she said.

Egypt has been shaken by political and security instability since the 2011 revolt that toppled former president Hosni Mubarak, including deadly attacks claimed by the Islamic State group.

Jihadists began an insurgency in Egypt after the 2013 ouster of Mubarak’s successor, Islamist president Mohamed Morsi, who was forced out by the military in the face of mass protests against his rule and that of his Muslim Brotherhood.

Extremists have hit several targets in Egypt in recent years, including Coptic churches and institutions.

And in October 2011, nearly 30 people were killed at a Coptic Christian demonstration that was violently crushed by security forces.

The Copts — who make up about 10 percent of Egypt’s population — were protesting against the torching of a church.

“We fear for the future and because of the events that we have experienced,” said Sobhi.

Mahaba has set up a “psychological support” system for pupils who have been traumatised by violence, she said.

Associations like Asmae are also anxious about the government’s plans to implement a contentious law adopted last year that would allow authorities to oversee foreign funding of Egyptian NGOs and the activities of foreign ones.

“We are all worried,” said Asmae’s representative in Egypt, Sherif Abdelaziz.