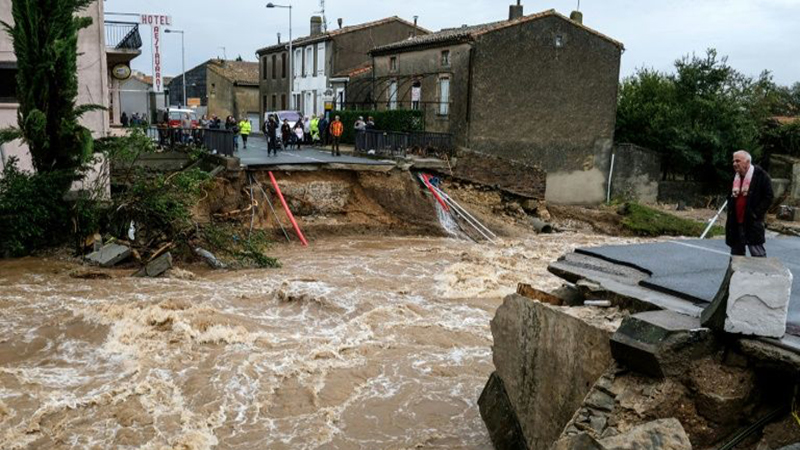 At least 13 people died as violent rainstorms turned rivers into raging torrents in southwestern France on Monday in the latest episode of wild weather in Europe, officials said.

Flash floods swamped a number of towns and villages around the fortress city of Carcassonne, leaving a trail of overturned cars, damaged roads and collapsed homes.

An elderly nun was swept to her death as rising waters smashed through a nunnery in the village of Villardonnel to the north of Carcassonne. Meanwhile, at least four people died overnight in the hard-hit village of Villegailhenc, local authorities said Monday.

As Prime Minister Edouard Philippe headed to the scene, the French interior ministry said a total of 13 people had died after the equivalent of three months’ of rainfall in just a few hours.

“There’s water everywhere in the house. Everything is flooded,” Helene Segura told AFP by telephone from Villegailhenc where at least one small bridge had collapsed.

“When I look out the window, I can only see water and mud everywhere. It’s sad when you’re 70 years’ old like me and you need to redo your house, change the furniture and all the upholstery,” she said.

Authorities rushed in helicopters and 600 firemen to help with rescue operations, particularly those in the floodplain of the Aude river which hit its highest level in 100 years, according to the Vigicrues flood agency.

In the town of Trebes, near Carcassonne, the water in the Aude rose eight metres (26 feet) in just five hours, officials said.

Around 1,000 people were evacuated in the area of Pezens, also near Carcassonne in the Aude area, due to fears that a nearby dam could burst.

The storms were triggered when a front of warm and humid air from the Mediterranean Sea slammed into colder air around the Massif central mountain range in central France, inundating an area from the eastern Pyrenees to Aveyron further north.

Violent storms on Sunday also hit Portugal, leaving 28 with minor injuries and hundreds of thousands without power amid flooding in the region around the capital Lisbon.

The heavy rain, which later rolled on through Spain, was the tail end of hurricane Leslie in the Atlantic which weakened to a post-tropical storm as it made landfall.

Last week, an unrelated weather system moving across the Mediterranean left 12 dead in the Spanish island of Majorca and another two died in southeastern France.

Firemen responded to more than 250 calls overnight, as 160 to 180 mm (6 to 7 inches) of rain fell within five hours in Carcassonne.