‘Arxang’ — a combination of literature and graphics 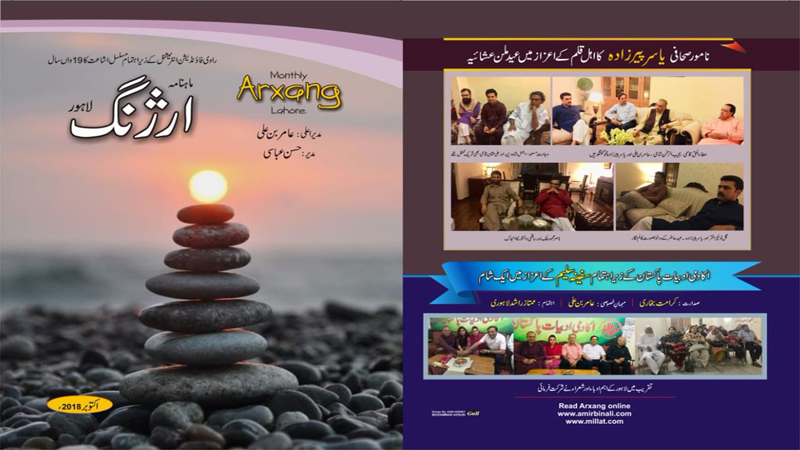 In an interview given to Amir Bin Ali by Naaz Butt, a female poet, she raises a point that there exists a section of males who find pleasure in seeing the female gender as subservient to them. I feel that this section forgets that giant names in the West like Jane Austin, Virginia Woolf, J. K. Rowling, Alice Munro, Eliot G., Margaret Atwood and Toni Morrison are recognised names as renowned female writers. Guardian reported on January 17, 2018 that topped by Margaret Atwood, the UK’s ‘Top Ten’ bestselling authors of literary fiction last year features only one male writer, Haruki Murakami whereas the annual Vida count of authors across the world suggests about two-thirds of those published, and the critics who review them, are men – but their intersectionality survey is less conclusive.

In a very intrusive essay titled ‘Inshaiye Kei Roop Mukhtalif Asnaaf Adab Main’ (many facets of Inshaiya in various formats of literature) by Prof. Jamil Aazar, he observes that ‘Inshaya’ is a very delicate form of literature. It has daintiness of a Ghazal, power of a short story, philosophy of a novel and pauses as in a drama, all combined with a soft freshness of a symphony played in the background. Above all one’s self encompasses all these ingredients. Professor Aazar says that whenever he reads a short story, reads a ghazal or a travelogue or a novel he locates elements of Inshaiya in them, which are originality and spontaneity. Even in new poem, Inshaiya’s forms are visible. Example can be quoted that of the poem ‘The Rebel’ by D. J. Enright (Page 5). Inshaiya sometimes portrays taking to oneself like Hamlet did in Shakespeare’s play “To be or not to be, that is the question/whether ‘tis nobler to the mind to suffer/the slings and arrows of outrageous fortune/or to take arms against a sea of troubles/ and by opposing them”.

Neelum Ahmad Bashir writes an essay titled ‘Bechain Manto’ (perturbed Manto) in which she mentions of Manto’s revival nowadays among all generations, a sudden realisation after ridiculing him in the past

Neelum Ahmad Bashir writes an essay titled ‘Bechain Manto’ (perturbed Manto) in which she mentions of Manto’s revival nowadays among all generations, a sudden realisation after ridiculing him in the past. We find sessions on his works, newspaper essays, stage plays and what not. One wonders as to why this writer’s works that he created in a short span of time has received this sudden realization. In a way he has been rediscovered. One wishes that this credit was due to him in his lifetime. He was not born in an era where financial affluence was abundant like that with some writers of today. Despite that he forced himself to write some pieces ‘on order’ to get some money for his family, he stuck to write on poverty and ill-wills of the society. Neelum gets perturbed when she looks at some modern faction of the society citing Manto as their favourite writer! One wonders how in their affluence this faction can feel the pains of the poor and deprived ones! Manto’s stone at his grave is simple; just date of birth and death. Perhaps his family avoided the wrath of the narrow minded conservative Mullah. Now in heavens he would be wondering as to when his stories would take a new turn as injustices in the society are nowhere lesser to his days!

Dr. Anwaar Ahmad questions himself that if asked as to who is he, he may not be able to satisfy the query of the person who asked for his identity. He told this jokingly to Dr. Mukhtar Azmi ten or twelve years ago. He is still searching for an answer. ‘I am a small doctor and even Iqbal not being able to satisfy this query had to take refuge in the couplet ‘Iqbal Bhi Iqbal Sei Agaah Nahi Hei/Kutch Is Tamaskhar Nahin, Wallah Nahi Hei’ (By God it is not a joke as even Iqbal does not know who is Iqbal).Dr. Anwaar has categorized for types of knowledgeable people. One, who knows something but are aware of that, such people is wise and knowledgeable and they can be relied upon to take guidance from. Two, people who know something but are unaware of this quality. These are innocent people and need to be loved. Three, who do not know anything, such people are students and need encouragement. Four, who do not anything and are aware of this negative trait in their personality, such people are illiterate and their company should be avoided. In this light essay Dr. Azmi highlights other qualities present in Dr. Anwaar Ahmad (Page 09).

Zafar Najmi writes review on travelogue ‘Dariya Sei Sehra Tak’ by Jaffar Hassan Mubarak. Mumtaz Raashidworkedhard to dig out information on Lahore’s ancient literary organizations (Page 14). Literary hubs were Lukhnow, Delhi and Lahore right from the beginning. Around 1910, Allama Iqbal used to attend monthly Mushairas inside Mochi Gate. Around 1000 people used to gather to listen to his long poems. Halqa Arbab e Zauq and Progressive Writers Association became active in 1930s. In the past literary sessions used to be held in Barood Khana, Masti Gate and Imli Takia etc. Akbar Lahori and Aqa Baidar Bakht’s Mehfils were famous too. Muhammad Mumtaz Rashid has taken pains to mention all the literary sessions he attended, all the sessions held in homes of literary people etc. to-date. Those interested in the history of Lahore’s contribution to literature can consult this essay.

The traditional meaning of Hamd, according to Wikipedia is that it is a word or a poetic piece to be recited by Muslims in order for him/her to keep Allah in mind. Muslims should always praise God no matter what state they are in. When Muslims say AlHamdAllah it is out of love, humility and complete submission to the oneness and perfection of Allah. On Hassan Abbasi’s earlier book ‘Saaein’ this reviewer had observed that he has recited poetry in praise of God in a totally different way to what it is traditionally done. It comprises five long Ghazals with around five hundred couplets. ‘Radeef’ of all couplets is the word ‘Saaein’. Now Hassan Abbasi has come out another collection of Hamdia Diwaan titled ‘Saheb”. Muhammad Amin Sajid Saeedi from Haasilpur reviews it (Page 17).

Muhammad Tariq Ali writes a short story ‘Do Waqt Ki Roti’ (two meals a day) comparing a hard earned money by the narrator (who started his earning by supplying material on his bicycle turning into a small building contractor, raising a family with support of his wife) and another character Saiyyan by supplying women to the needy ones. The latter kept an office where he used to carry out this business under the cover of supplying building material. It is a nice story exposing the honest and the dishonest bread earners.The story hints at the current scenario in the country where conflict between money launderers and those opposing corruption in going on. Another thought provoking short story titled ‘Sheesha Aur Sang’ (glass and stone) has been contributed by Seema Piroze. Translation of Rudyard Kipling’s ‘Nanha Memaar’ has been made by Najib Umar. Aamir Bin Ali writes a travelogue on the simple life style of a Nobel Laureate who does not mind to wash his car himself in Japan. Aamir wishes that the fourth and fifth Nobel Laureates from Pakistan do not have to leave their country; the earlier three being Hargobind Khurana from Raipur in Biology, Dr. Abdus Salaam in Physics and Mala Yousufzai from Swaat in Peace.

Interview with this reviewer appears on Page 33 highlighting his contributions in music, literature and engineering followed by that of Naaz Butt, the female poet (Page 36). Poetry and book reviews follow in the end of this interesting issue of Arxang.