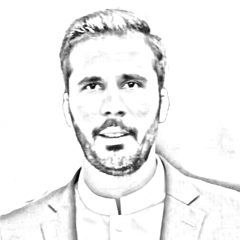 Is wealth, foreign education or a prominent family name, the only criteria to ensure the credibility of the CM Punjab?

There continues to be a huge up-roar in a particular class of our society after the appointment of Usman Buzdar, Chief Minister Punjab. It has been more than 6 weeks and the recent CM Punjab is still the talk of the town. It is worrisome how the comments and concerns on Usman Buzdar have ranged from being extremely ruthless to pointlessly ridiculous. There seems to be strange anxiety amongst this certain segment of the society.

It is purely rhetorical to ask what exactly happened when Usman Buzdar became the CM Punjab. I kept wondering what and where things went wrong when he was appointed. Did Kaptaan not know what he was doing? Did some ‘lobby’ deceive him to take this decision? Then again the man always reached the stars wherever he set his foot, how can he even go wrong.

Personally it even took me a few weeks to realise what really went wrong. I decided to google the Chief Minister of Punjab from 1970, onwards and in five seconds I could see the list with prominent names and elite backgrounds. The first name was Sadiq Hussain Qureshi, an Aitchisonian, who was Governor Punjab before he became chief minister, Punjab. Additionally, he used to own a Pepsi factory and came from a well-known family of Multan. While ignoring the caretaker ministers, I kept scrolling down the list and the pattern I noticed was that there were names of the mighty ones of that time. Starting from elder Sharif, Wayne, Wattoo, came the younger Sharif and then came son of Zahoor Elahi, the famous Chaudhry Pervez Elahi who is currently speaker Punjab Assembly. Once the reign of Pervez Elahi ended, we had the younger Sharif for consecutive two terms. One thing was common to all these names; they were acceptable to the masses. Over the years they have become predictable names and expected nominees once their parties got the required number of seats. There was no hue and cry once these mighty players of politics took the office. If there was any debate regarding who should be appointed to the seat, the argument was marked with nepotism; whether it should be father or daughter, son or nephew or Khosa or Sharif, Chaudhry or Makhdoom. This was the maximum extent of the argument that took place. In the end it was no joke, we are talking about the Chief Minister of the biggest province of Pakistan.

Thank you, Kaptaan, for giving us Buzdar so the ordinary man can relate the person who he has trusted with a big office.It is time to respect Buzdar and standby him to break the set norm of artificial standards to judge the credibility of a leader!

I did get my answer when this game of musical chairs ended. After these elite names came our humble and down to earth Chief Minister, Usman Buzdar. Who belongs to an ordinary family from Taunsa-Sharif. With his appointment came a very odd reaction. He was mocked for being called a “common man”, for his physical appearance and it went as far as he was taken utterly non-seriously in his first press conference. Despite such baseless criticism, our Chief Minister was confident enough not to get off the track. The next set of memes were, bombarded after CM Punjab’s visit to IT Center. Not having a foreign qualification or not dressed in expensive attire was a reason enough for certain members of the society to question his intention and tag him as someone who was there for mere photo shoot. It is unfortunate to witness how these deep-rooted standards, for judging a leader were unable to digest change. It is extremely important to draw the attention towards the fact that Shehbaz Sharif was never ridiculed on these standards. Moreover, it also makes me wonder how my two bachelors, one master and Bar-at Law degree would have made me look any better at the Arfa Kareem IT center visit.

For me it had hit rock bottom when a video of Kohinoor journalist harassing our elected CM went viral on Social Media. He mocked him by questioning his level of literacy. It was disturbing to see how we are so set in our ways to salute the mighty that the key person of Punjab was subjected to questions on whether he can read or write. It was even more upsetting to see how some senior ministers are trying to back stab their own team leader. However, our CM Punjab stands tall, he ignores, he smiles and does not react.

For the mindset discussed above, Kaptaan wrote a chapter in his biography and referred to them as the “brown Sahab” to portray how they are blindly inspired by the west and don’t give up on any chance to boot lick any “gora”, yet can’t get rid of their “desi” descent. Again I am drawn towards the comparison why were these same people who stood head bent in front of Rana Sanaullah and Shehbaz Sharif? Is wealth, foreign education or a prominent family name, the only criteria to ensure the credibility of the CM Punjab?

To all those who can’t digest the bouncer by our Kaptaan intended to swipe the arrogance of the chair and demolish the monarchial mindset, I have this to say. The chair was meant to serve the people by the people when constitution of Pakistan was made. Thank you, Kaptaan, for giving us Buzdar so the ordinary man can relate the person who he has trusted with a big office. It is time to respect Buzdar and standby him to break the set norm of artificial standards to judge the credibility of a leader!