The prestigious shrine of Amrote Sharif 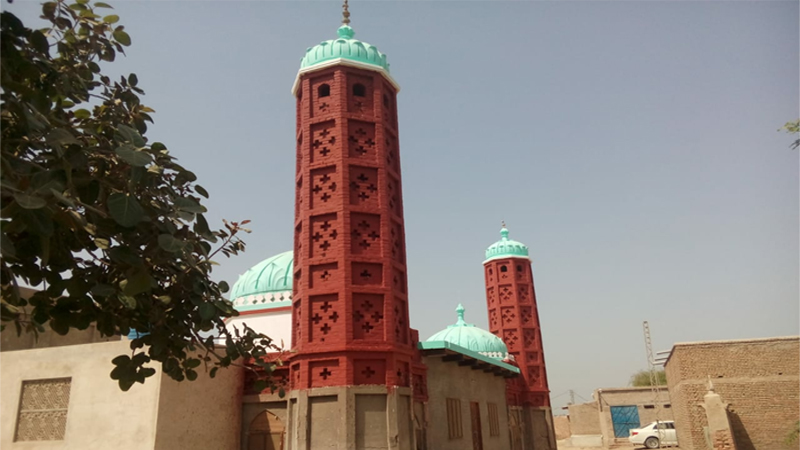 SHIKARPUR: Sufism in Pakistan is multi-faceted as saints are considered not only preachers of love but also the pioneers of shrine culture.

In Sindh, each shrine having its very own significance, history and custom is cherished in its own way.

Particularly, Shikarpur district, once known as the Paris of Sindh, is considered as a land of saints, spiritual leaders as well as the land of ancient historical, heritage and eminent places.

A century old “Water Masjid” is one of them, which was built on seven pillars at the center of Kheer Thar canal, situated near Garhi Yasin tehsil of Shikarpur by the prominent spiritual leader Syed Taj Mahmood Shah Amroti, who for the first time translated Holy Quran into Sindhi language and described its every word in detail.

Besides, he also built a small mosque near Amrote Sharif, which is located at a walking distance from the Madarsa for Muraqiba (meditation) purposes.

According to Rushdullah Shah Amroti, his grandson Molana Ubedullah Sindhi had also rendered his services in that seminary.

The popularity of Syed Taj Mehmood Shah Amroti was spread in Iran, Kabul, England, and many Arab countries due to his spirituality and honesty.

In 1923, before partition in British era, the British government had decided to construct the Kheer Thar canal (Water Canal) to facilitate people of Balochistan with Irrigation water, and started its development work, but Juneja village and a small mosque were creating hurdles in the way of its construction when development work of the canal approached Amrote Sharif village.

British government, according to Rushudullah Shah Amroti, issued notices to the people of village to vacate village within a few days, in compliance of notices, Juneja village was vacated by villagers and the then British officers started removing hurdles for the construction of the canal, and attempted to demolish the mosque, however faced a strong resistance from Syed Taj Mehmood Shah Amroti, who advised them to either modify the course of canal or resolve the issue by any other means.

According to his grandson, he wrote several letters to the British government, the then collector, engineering department and other higher authorities to resolve the issue with a positive approach, but he could not get any positive response from the other side.

Meanwhile to avoid conflict, the British government sought assistance from the engineering department to find any alternative way for the construction.

Later, a consensus was achieved as Syed Taj Mahmood Shah Amroti allowed them to proceed with the construction work near the mosque which was not demolished.

A small bridge was constructed on seven pillars for building a path leading to the mosque, and the subsequent completion of the canal led irrigation water to flow into the canal.

Thereby, the mosque was surrounded by irrigation water and became popular with the name of Water Masjid.

He said that the rehabilitation and renovation work of the mosque has been done on self-help basis.

A number of tourists from all parts of the country and abroad visit the mosque.

Syed Taj Mahmood Shah Amroti was a founding member of the Jamiat-ul-Sindh chapter and delivered a presidential speech at Khilafat Conference organised in Jacobabad against the British government, and he put forward a resolution “Non-Cooperation Movement” which was passed unanimously by all participants on May 20 in 1920.

Molana Ubedullah Sindhi was one of the prominent persons who had rendered their services at the Dargah Amrote Sharif, and he stayed there for seven years.

He died on November 5 in 1929 in Amrote Sharif where he was buried next to his Dargah.

Later, one of his disciples Muhammad Salih aka “Aaijiz” published the weekly newspaper “Weekly Taj” in 1955 for paying tribute to his spiritual leader, but could not continue publication after a few years.

Currently, Syed Siraj Ahmed Shah is the custodian of the shrine.

It is not the power of a shrine to illuminate a saint but the saint who preached, with such loyalty and sincerity that even after death his teachings are celebrated, observed and deemed endlessly.