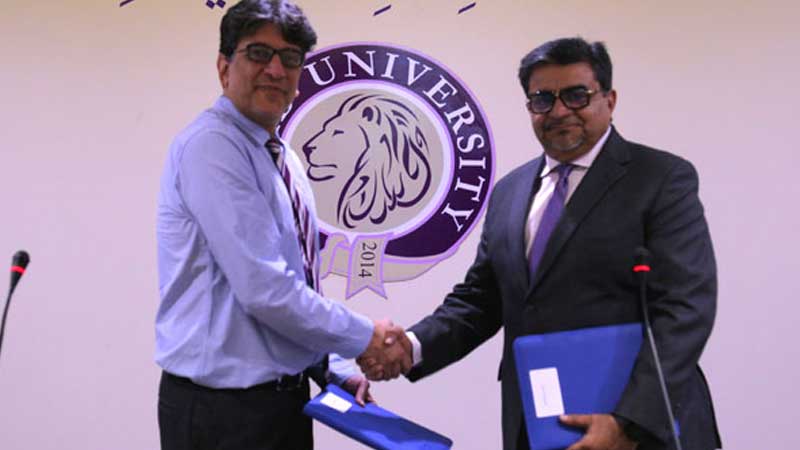 “Investing in the youth of Pakistan is integral to the development of the country,” said Mr Shoukat Dhanani during the inaugural ceremony of School of Science and Engineering in Habib University (HU).

A formal renaming ceremony was organised on Saturday at HU. The ceremony was opened by Dr Aamir Hasan, a HU faculty member. The event began with recitation of the Holy Quran.

During his address speech, Mr Shoukat Dhanani said, “Dhanani School of Science and Engineering (DSSE) is our first step in our relationship with HU and we hope it will evolve into a lifelong commitment.”

HU President Mr Wasif Rizvi gave a detailed briefing to the audience on the occasion. During his president, he said that HU had the good fortune of having a vast support network which started from Pakistan but expanded to rest of the world. Rizvi spoke in detail about fundamental issues in access to higher education in Pakistan. He said that HU’s aim was to address these issues in order to make higher education available to everyone.

“Habib University is by far the most generous university in the world,” Mr Rizvi continued. He acknowledged the generosity of two of HU’s most prominent supporters Nargis Soorty and Shahbaz Yasin Malik. During the ceremony, Soorty and Malik were presented with medals by HU chancellor Rafiq Habib and Shoukat Dhanani.

Further, he acknowledged Dr Mark Weichold and Dr Charles E. Thorpe, who were also presented with Habib medals. “Both of them opened their institutions to us, shared all possible intellectual capital, took us to their main offices and signed an official partnership with Texan A&M and Carnegie Mellon,” said Mr Rizvi while thanking them for their support.

HU Chancellor Rafiq Habib also spoke in detail of the support HU garnered from around the globe. “We have been extremely fortunate in this journey of trying to build a world class institution. Our vision and motivation was clear but the support we received has been far, far beyond our expectations,” he said during his inaugural address.

He said that Habib University (HU), Pakistan’s first Liberal Arts and Sciences undergraduate institution was formed by the single largest philanthropic donation in the history of the country.