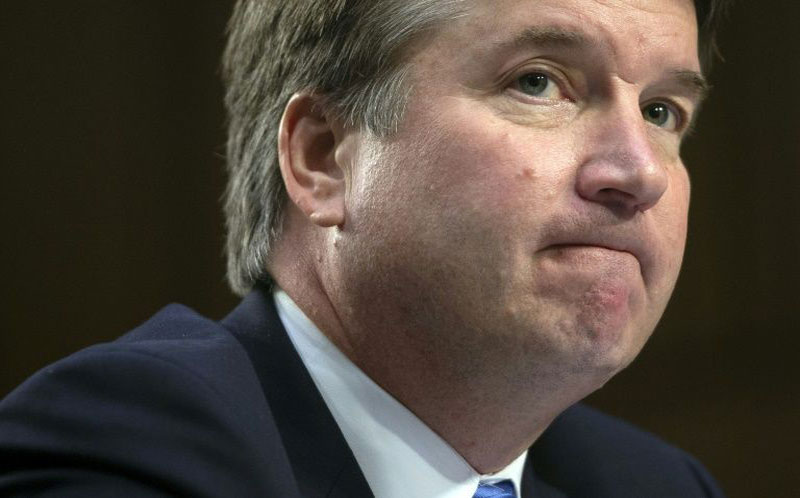 US President Donald Trump praised his Supreme Court pick Brett Kavanaugh but said he would be open to withdrawing his nomination if he finds testimony on Thursday about sexual assault allegations against him to be credible.

“I can always be convinced,” Trump said on the eve of a Senate Judiciary Committee hearing featuring one of Kavanaugh’s accusers.

“If I thought he was guilty of something like this, yes, sure,” Trump said at a press conference on the sidelines of the UN General Assembly in New York. “It’s possible I’ll hear that, and I’ll say, ‘Hey, I’m changing my mind.'”

“I want to watch,” Trump said ahead of the hearing featuring Christine Blasey Ford, a university professor who has accused Kavanaugh of sexually assaulting her when they were teenagers.

In prepared testimony released on Wednesday, the 51-year-old Blasey Ford said she feared Kavanaugh would rape her during the attack, which she said occurred in the summer of 1982.

Blasey Ford said the incident left her “drastically altered,” but it was her “civic duty” to tell lawmakers what happened.

Kavanaugh has also been accused of exposing himself to a classmate, Deborah Ramirez, during an alcohol-fueled Yale University party a few years later.

On Wednesday a third woman came forward with explosive allegations, saying she witnessed sexually abusive behavior by Kavanaugh when he was a teenager.

Trump described Kavanaugh as a “great gentleman” and a “great intellect” and said he believed the accusations against the conservative judge were “false.”

Trump said he was skeptical because he personally had been the target of “false statements” in the past made by various women.

“I’ve had a lot of false charges made against me,” he said. “People want fame, they want money, they want whatever.”

He also slammed his Democratic opponents, accusing them of being “con artists” and destroying the 53-year-old judge’s reputation.

The Kavanaugh nomination has turned into a political firestorm ahead of November congressional elections and is threatening to derail Trump’s push to get a conservative-minded majority on the top court ahead of the vote.

“He is asking for a lifetime appointment to the nation’s highest court where he will have the opportunity to rule on matters that will impact Americans for decades,” the 10 Democrats on the Senate Judiciary Committee said in a letter to the president.

The third woman to come forward, Julie Swetnick, said she saw Kavanaugh engage in sexually abusive behavior as a teenager and claimed she had been drugged and gang-raped at a party he attended in approximately 1982.

Kavanaugh strongly denied the allegations by Swetnick, 55, who has worked extensively for the federal government.

“This is ridiculous and from the Twilight Zone,” he said in a statement. “I don’t know who this is and this never happened.”

Later, the judiciary committee said it had received a fourth allegation, this time in a letter from an anonymous source who said their daughter and others had witnessed Kavanaugh physically assault a woman while intoxicated in Washington in 1998, shoving her “up against the wall very aggressively and sexually.”

But a spokesman for the committee told AFP the letter lacked credibility and the panel had no way to investigate the matter because the complaint was anonymous.

Swetnick said she saw Kavanaugh behave as a “mean drunk” at parties they both attended growing up in suburban Maryland.

“I observed Brett Kavanaugh drink excessively at many of these parties and engage in abusive and physically aggressive behavior towards girls, including pressing girls against him without their consent, ‘grinding’ against girls, and attempting to remove or shift girls’ clothing to expose private body parts,” Swetnick said.

She did not specifically claim Kavanaugh took part or that he was aware of her rape, but said that he and other boys in his circle engaged in similar behavior.

She said she saw efforts by “Kavanaugh and others to cause girls to become inebriated and disoriented so they could then be ‘gang raped’ in a side room or bedroom by a ‘train’ of numerous boys.

“I have a firm recollection of seeing boys lined up outside rooms at many of these parties waiting for their ‘turn’ with a girl inside the room,” she said.

“These boys included Mark Judge and Brett Kavanaugh,” she said. Judge is a boyhood friend of Kavanaugh who has written a book describing the debauchery of his high school years.

Kavanaugh, in prepared testimony released on Wednesday, repeated his denial of Blasey Ford’s allegation and said “this effort to destroy my good name will not drive me out.”

And he told Senate Judiciary Committee investigators that he is “looking forward” to the hearing on Thursday, according to a transcript of a call released by the committee.

“I’m really just, you know, stunned. And outraged.” Kavanaugh said. “I look forward to defending my name, defending my integrity.”