ISLAMABAD: The National University of Science and Technology on Tuesday barred female students and faculty members from smoking in campus, while designated a special area for males to smoke. 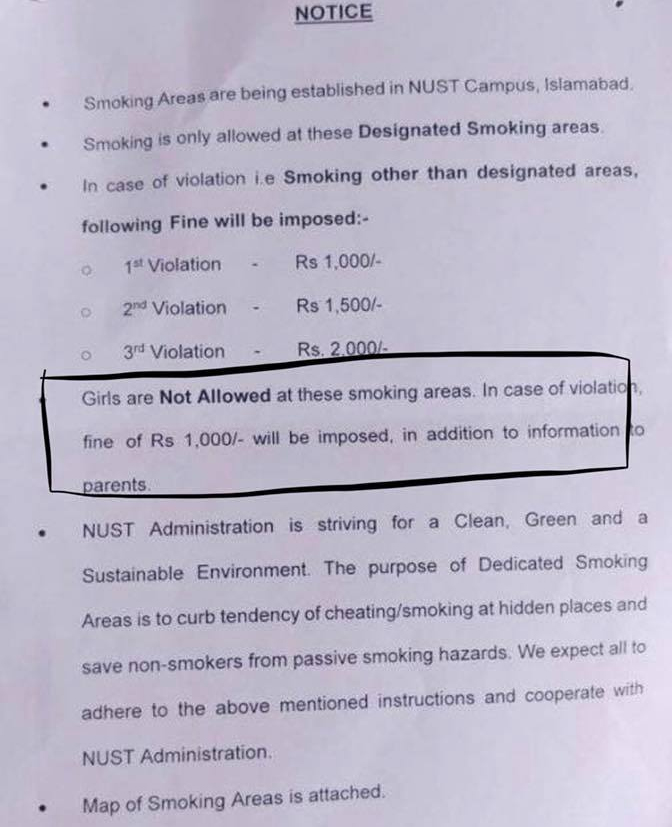 The Islamabad-based university is being criticised for its move on social media, with Human Rights Minister Shireen Mazari condemning NUST’s ‘gender-biased’  and ‘discriminatory’ approach.

Good to discourage smoking but discriminatory approach towards girl students and gender-biased rules cannot be acceptable. Wrong message being given to our young students – that it is okay to discriminate against women. Banning smoking for all on campus would be far healthier too pic.twitter.com/F7lgHcgO3T

Here are the other reactions

#NUST university frequently in the news for displaying such problematic values, views and actions. Might as well rename it SATYAA-NUST 🤦🏻‍♀️

A top Pakistani university doing its bit to reinforce the cultural stereotype that 1. Any woman who smokes is of loose morals and 2. Is hiding it from her parents regardless of her age pic.twitter.com/RIUKytMyFO