Naval chief dwells upon ties with US, India, Afghanistan 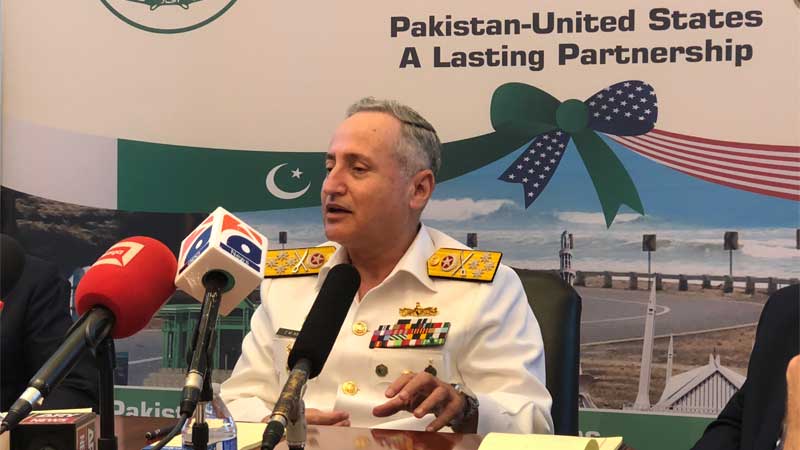 He stressed that Pakistan sought a good, equitable relationship with the United States (US) based on mutual respect. In responding to a question about the suspension of $300 million US aid to Pakistan, including the freezing of military assistance, Abbasi said the financial military assistance provided by the US ‘is of secondary importance’.

“We want a good relationship with the US based on mutual respect, an equitable relationship.”

Abbasi highlighted that despite US President Donald Trump’s suspension of Pakistan from the US government’s International Military Education and Training program (IMET) that shuttered opportunities allocated for 66 Pakistani officers, Pakistan continued to send officers for training in the US ‘funding the programme from our own resources’.

The training programmes between the US and Pakistan have been in place for over a decade, and were seen as a hallmark of the good bilateral relations.

However, Abbasi did not elaborate whether Pakistani funded officers were participating in the coveted programmes at the top US military institutions that include: the US Naval War College, Naval Staff College, and courses that include cyber-security studies and programmes that officers previously participated in under IMET.

In responding to American media, Abbasi defended Pakistan’s decision to counter India’s sea-based nuclear programme, by testing the Babur- III missiles. He said the sea-based nuclear weapons gave India an assured second strike capability that ‘disturbs the equation’, tipping a crisis situation between the two countries in India’s favour; therefore, he said ‘unless we equate the balance it may induce India to start a war’.

In April, Pakistan conducted the second flight test of Babur-III nuclear – capable submarine-launched missile cruise (SCLM) – launched from a submerged ship in the Arabia sea and struck an undisclosed location.

“We have legitimate concerns and our programme is aimed at discouraging India from doing so,” he stressed to American journalists.

Abbasi explained that Pakistan had designed a robust programme to ensure the security of the assets developed to counteract an Indian threat, that “provides all the tools, procedures and settings under a central command that runs through Strategic Plans Division,” he said.

“Afghanistan is a separate, sovereign country and we respect it as that. Whatever strategic depth we have is our own,” he said. He continued to highlight the threats experienced from Afghanistan. He explained that the election of a new Pakistani Prime Minister will not change Pakistan’s policy towards Afghanistan. “Our policy has always been to work towards peace and stability,” he said.

He continued, “terrorists take refuge in Afghanistan and use its territory for launching attacks into Pakistan. The most recent terrorist attacks in Pakistan were conceived, planned and executed from Afghanistan. That’s why we are trying to fence our border,” he said. “We are all for a political solution to the Afghan problem.”

Speaking on the India-US relationship that recently saw the two countries sign a maritime agreement, Abassi stressed, “this did not affect planned future US-Pakistan naval exercises.” He said ‘it is not a zero sum game… just because the US is doing exercises with India doesn’t mean it will not do exercises with Pakistan.”

He then announced Pakistan is to host multinational maritime exercises in February 2019, that will see around 50 international navies participate – including China and the US.

Speaking on China, he dispelled a recent report that China had established a base in Gwadar port. “There’s absolutely no truth to that” he said, “it was a commercial hub,” adding “there are no plans of any foreign bases anywhere in Pakistan.” Furthermore, he explained there have not been any “international war ships” that have travelled through Gwadar port. However, when Gwadar eventually opens for business “all navies will be welcome,” he said.