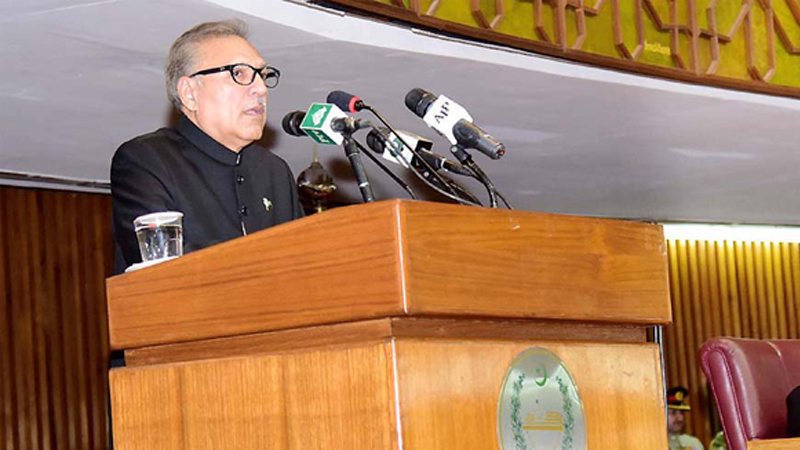 ISLAMABAD: In his maiden speech to the joint session of the parliament on Monday, President Arif Alvi said the newly elected government is on a path to build a ‘Naya Pakistan’, with core focus on ridding the society of corruption.

“The biggest reasons of issues facing Pakistan are corruption and group interests. July 25 elections proved that people are fed up of dishonesty and want a system of governance devoid of corruption,” he said, and urged the political leadership to stand united and make concerted efforts to strengthen the accountability system, counter corruption and address serious economic challenges by enforcing austerity and playing their part in providing social justice, health and education to the masses.

“In my view, the concept of Naya Pakistan lies in promoting simplicity, discontinuation of unnecessary protocols and a corruption-free system. We should keep in mind that we are a nation which is under the burden of debt,” he said. “For this, there is a need to strengthen accountability institutions, along with a transparent system, so that they can perform their duties honestly and without any discrimination,” he added.

The president said Pakistan was facing gigantic challenges both at the domestic and international fronts and the biggest was a very weak economy. The country had been spending a major share of its resources on debt repayment, he said. “The balance of trade is also unfavourable. There is a huge gap in the quantum of our imports and exports. The circular debt has increased to Rs 1,100 billion over the past few years and the value of rupee has depreciated sharply in recent months,” he said.

He said according to the established economic principles and Pakistani laws, the debt-to-GDP ratio should not exceed 60 percent but the country had been violating the law for long. The external and internal debts, he said, had crossed the critical levels which required immediate attention and simplicity in lives, avoiding extravagance and limiting needs by the people.

The president urged the government and leaders of all the political parties to guide the nation in the right direction. He was confident that the government would chart out a clear roadmap for development of all the sectors, and at the same time ensure transparency in governance.

He was confident that the government would be able to reduce fiscal deficit, address the issues of state-owned enterprises, formulate investment-friendly policies and simplify the investment processes. “For the purpose, the government will have to reduce the role of departments and put a restraint on their discretionary powers. Banks and investors will also have to be proactive in that regard,” he said, and called for attracting the overseas Pakistanis to invest in the country.

On the looming water crisis, the president said the country was in need of building dams. He called for preventing wastage of water and preserving the precious resource that was at the brink of becoming scarce. He said the government must promote the advanced system of irrigation as well as bridging the gap between resources and population growth.

The president mentioned the need to tackle power, energy and electricity related issues. The power transmission system needed to be made more efficient, line losses reduced and theft of electricity should be eliminated.

He said the general populace was concerned about the improvement in education and health sectors. He underlined the need to improve quality of education, besides enhancing the number of educational institutions.

The president said it was the need of the hour that women are provided more opportunities and are mainstreamed in the national affairs. It should be ensured that women play their due role in the economy and society without any fear, he added.

He said the present government had embarked upon a programme to ensure maximum employment and housing facilities for the masses, which would bring about a real change. He said Balochistan and other far flung areas needed attention.

The president said good relations with all the countries, particularly with neighbours, constituted the basis for a country’s foreign policy. The establishment of a new government was a watershed moment in the foreign relations, he said, adding bilateral relations had improved with the recent visits of foreign ministers of China, United States, Iran and Turkey, and Saudi Arabia’s information minister to Pakistan, followed by Foreign Minister Qureshi’s visit to Afghanistan.

He said Pakistan’s friendship with China was exemplary which was based on mutual trust and had stood the test of time as the two countries backed each other through thick and thin. “The government fully supports the China-Pakistan Economic Corridor. I hope that the government completes CPEC projects expeditiously, which will mark the beginning of a new era in the region,” he added.

The president was confident over strengthening of energy and trade relations with Central Asian states. He also highlighted Pakistan’s ties with Russia and said the country accorded utmost importance to those relations. He said close relations with Turkey were very special as the same were an important factor in the stability and progress of the entire region. “Peace and stability in Afghanistan is vital for the prosperity and progress in Pakistan. Lasting peace in that country will open new trade corridors for us and for the region as well,” he added.

The president said Pakistan wanted a peaceful and good neighbourly relationship with India, based on mutual co-existence, and would welcome every positive step in that direction. “Resolution of the Kashmir dispute is essential to have an enduring relationship between the two countries. Blame game brings no solution to any dispute,” he emphasized.

Earlier, the PML-N and its allies walked out from the joint session of parliament citing govt’s impudent behaviour. They started making ruckus as soon as Presidnet Alvi began addressing the joint session. Former speaker Sardar Ayaz Sadiq attempted to raise issue of rigging in general elections but he was barred by the incumbent speaker. Upon this, a pandemonium erupted in the House and PML-N along with its allies walked out of the joint session. The PPP, however, didn’t join them. Later, Khawaja Asif shifted the blame of the boycott on government. He reiterated to raise the issue of alleged rigging in general election in the House today (Tuesday).