Pakistan and Afghanistan agree to ‘bury the hatchet’ 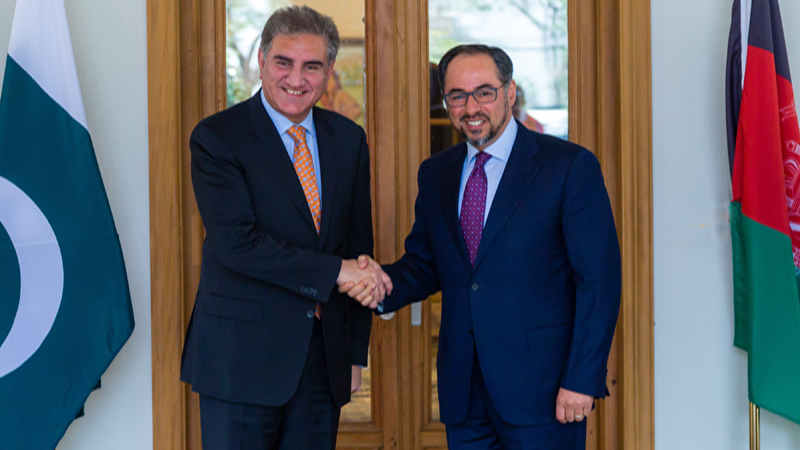 Foreign Minister Shah Mehmood Qureshi wrapped up his day-long visit to Afghanistan on Saturday on a ‘positive note’, pledging his country’s help in reconciliation with the Taliban and reiterating offer to impart training to the Afghan forces, officials said.

An official, who was part of the Pakistani delegation, told Daily Times, “We have conveyed to the Afghan leadership that the quest of Pakistan’s new government for a strong relationship should not be underestimated. We have also made it clear that Prime Minister Imran Khan has a strong political will to change things and these efforts should not be taken for granted.” “Although it was an introductory visit of Foreign Minister Qureshi but went extraordinary as both sides agreed to bury the hatchet and look forward to a new beginning,” the official said, who did not want to be identified by name.

The foreign minister during his engagements with the Afghan leadership conveyed that the new government attached great importance to its relations with Afghanistan and would work towards further deepening cooperation in the fields of trade development and connectivity. A Foreign Office statement said Qureshi assured the Afghan leadership that Pakistan, along with other partners of Afghanistan, remained ready to play constructive role in facilitating an Afghan-led and Afghan-owned peace process and reconciliation. “He underscored the importance of cooperation and coordination between the two countries in the areas of counter-terrorism and security and offered to train Afghan police and law enforcement agencies in Pakistani institutions,” the statement said.

The foreign minister informed the Afghan leaders that Kabul’s exports to Pakistan have recorded a substantial increase of 118 percent in 2018 after Pakistan waived off regulatory duty on imports this year in the context of enhancing trade between the two countries. He stated that Pakistan will fast-track steps including standardization and automation of custom procedures and up-gradation of infrastructure at crossing points between the two countries. For the second phase of 3,000 scholarships, more than 600 scholarships have already been granted and Afghan students would start their semester next fall, Qureshi said.

Qureshi reiterated Pakistan’s support for the National Unity government’s efforts to bring lasting peace in Afghanistan and underlined the importance of frequent high-level engagements between the two countries that have contributed in building trust and improving mutual understanding. He emphasized to maintain this upward trajectory in the bilateral relations through more high-level visits during the upcoming months.

The foreign minister handed over a letter from Prime Minister Imran Khan addressed to the Afghan president marking the first consignment of 40,000 tonnes of wheat gifted to the Afghan people. He also invited President Ghani to visit Pakistan.

On refugees, the foreign minister underlined the need for ‘dignified, sustainable and repatriation of Afghan refugees to their homeland through a gradual and time-bound plan’. They also agreed to expedite matters related to providing necessary security to Pakistan Consulate General in Jalalabad to ensure its early operationalization. Pakistan closed the Jalalabad consulate earlier this month over what officials claimed as intervention by Hayatullah Hayat, governor of Nangarhar, of which Jalalabad is the capital. “The visit provided an opportunity to set out the contours of the new government’s future engagement with Afghanistan to build mutually beneficial relationship and enhance cooperation between the two countries,” the Foreign Office said.

President Ashraf Ghani’s office in Kabul said in a statement the president in meeting with Foreign Minister Qureshi discussed regional peace and security, fight against terrorism and the implementation of the Afghan-Pakistan Action Plan for Peace and Solidarity (APAPPS). “The president while highlighting the importance of APAPPS said the plan will be effective if it is fully implemented,” the statement said. The meeting also discussed progress of the APAPPS and Pakistan’s support for the Afghan-led and Afghan-owned peace process. Afghan Foreign Minister Salahuddin Rabbani in his meeting demanded Pakistan to handover its national who had killed a Karachi-based diplomat last year, an Afghan Foreign Ministry statement said.

An Afghan security guard at the consulate in Karachi shot dead Zaki Abdu, third secretary, within the premises of Afghanistan’s Consulate General in February 2017, apparently over a personal dispute. Pakistan and Afghanistan currently have no agreement on exchange of criminals.