The foundation has been laid for a naya Pakistan: Buzdar

* Punjab CM says he belongs to the masses and therefore, knows their everyday problems well 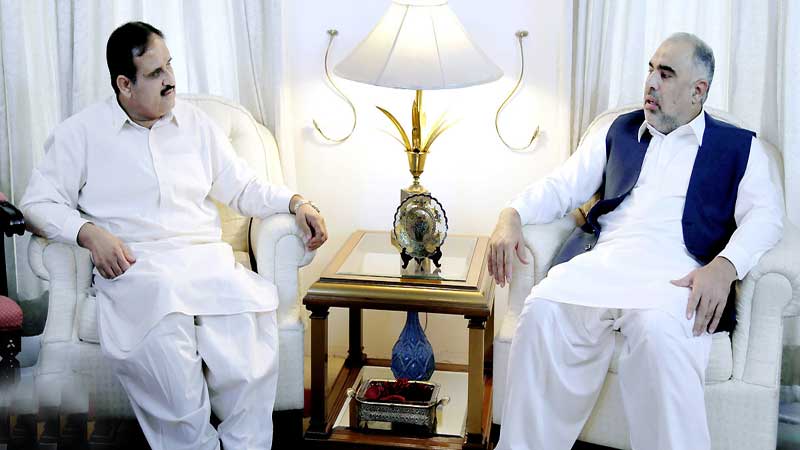 LAHORE: Punjab Chief Minister Sardar Usman Buzdar said that journey to achieve the goal of a new Pakistan has begun and the foundations regarding that have been laid.

He was talking to National Assembly Speaker Asad Qaiser who met him at his office on Friday.

During the meeting, various matters including parliamentary affairs came under discussion.

He said that the fate of the nation will change by following the vision of Prime Minister Imran Khan and added that work is being done day and night to materialise the dream of prosperity of the people.

He made it clear that no compromise will be made with regard to the implementation on change-agenda and a positive change will be visible to everybody. The people will soon witness marked improvements in different sectors including health, education and provision of clean drinking water.

He said that the Punjab government was diligently working to complete the 100 day agenda and the province will emerge as a role model with regard to its implementation.

He said that sectoral reforms are a priority agenda of the Pakistan Tehreek-i-Insaf (PTI) government. “The younger generation will be given a green environment by the plantation of more trees. The PTI is also implementing a programme for women development,” he added.

The era of lip service is over and it is time to show performance now. He said that people will be given relief and conditions of the deprived areas will be improved. Enhancing the respect of the parliament and bringing national issues under discussion in the apex democratic institution is the collective responsibility of all the political parties, concluded the chief minister. Senator Ayub Khan Afridi was also present on the occasion.

Delegations of people belonging to Dera Ghazi Khan and its tribal areas called also on CM Sardar Usman Buzdar at his office.

Talking on the occasion, the CM said that he belongs to the masses and therefore, knows their everyday problems well.

“The government fully knows the public sentiments and its issues,” he added. The prime focus of the PTI government is to provide basic necessities of life to the general public and work is being done speedily to implement the 100 day agenda of Imran Khan. This agenda is, in fact, a composite plan of public service which would be completed with full attention and efficiency. Imran and his team will come up to the expectations of the people.

The CM also took notice of the dilapidated condition of the tomb of Mir Chakar Rind Baloch in Okara and sought a report from the deputy commissioner.

Sardar Usman Buzdar condemned a blast near the vehicle of assistant commissioner adjacent to Pishin Bypass and expressed a deep sense of sorrow and grief over the martyrdom of levies officials.

He has extended sympathies to the bereaved heirs and prayed for early recovery of the injured.

Usman Buzdar also paid rich tributes to the bravery and courage of security officials martyred during a successful operation against terrorists in North Waziristan.

“The martyred officials set a wonderful example of bravery. The nation pays tributes to these martyrs on their great sacrifice,” he added. He said that Naib Subedar Nazir Ahmed Chandio, sepoys Amir and Fakhar have embraced martyrdom while bravely fighting the terrorists. The nation is proud of its brave sons sacrificing their lives for the motherland which will not be forgotten.

Buzdar said that democracy is an international norm.

It is based on independent public opinion to determine the political, socio-cultural and economic systems for the people.

In his message on International Democracy Day, the CM said that democracy was not limited to holding elections but was the best system to solve the problems of the people. It also symbolises supremacy of the constitution and independence of institutions like the judiciary and media. “People fully believe in democracy and are also convinced of the continuity of democratic system in the country. The purpose of celebrating this day is to raise public awareness and strengthening of democratic norms because people are the real rulers in the democracy,” he said, adding that PTI believes in democracy and is striving to strengthen it. It has always played an effective role for the strengthening of democratic institutions.