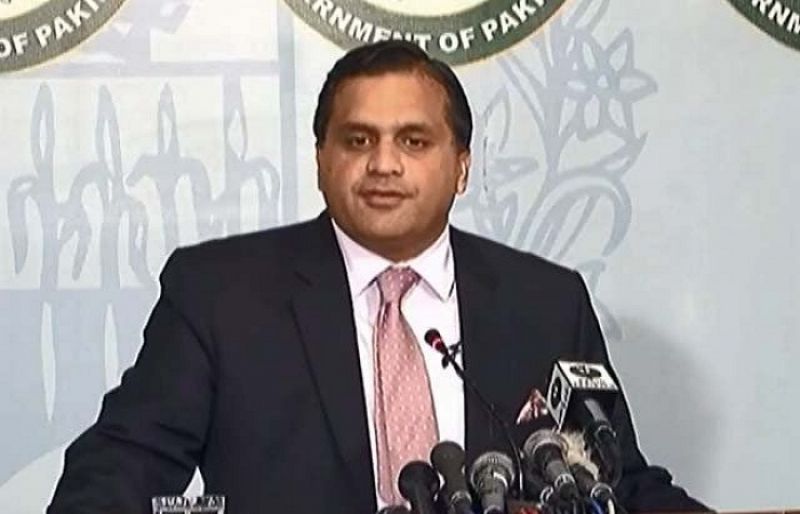 ISLAMABAD: Pakistan has taken strong exception to Indo-US joint statement issued after talks between the US Secretary of State and the Secretary of Defense with their Indian counterparts in New Delhi and strongly rejected accusations made against Pakistan.

The FO spokesman was referring to the Indo-US joint statement accusing Pakistan of delaying the Mumbai attack trial.

Also read: The significance of Indo-US alliance for Pakistan

The spokesperson termed the joint statement and allegations against diplomatic norms and said that mentioning of a third country with unsubstantiated accusations in a formal outcome document is inconsistent with the established diplomatic rules, procedures and established norms.

Faisal said it was more ironic that many other thorny issues involving the third country (India) were avoided in the joint statement by the Indian side.

Replying to allegations of delay in Mumbai trials, the spokesman said Mumbai trial is under procedure and judicial process shall take its course.

Pakistan asked US side to also focus similarly on the Indian state terrorism and the resulting humanitarian emergency in Indian occupied Kashmir, where gross human rights abuses are being committed by Indian forces on daily basis

Expressing dismay on ignoring facts in the joint statement, he said that there was no mention of the continued unprovoked ceasefire violations by the Indian security forces at the line of control and the working boundary.

Responding to a question about possibility of resumption of dialogue with India, Faisal said that Pakistan is always ready for talks with India for resolution of all outstanding disputes including core issue of Kashmir.

To a question, the FO spokesperson confirmed that Prime Minister Imran Khan will pay official visit to Saudi Arabia about which dates would be announced shortly.

He said that Foreign Minister Shah Mehmoud Qureshi will visit Afghanistan on 15th of this month during which he would meet Afghan leadership and during his meetings important issues concerning to peace and security will come under discussion.

Replying another question Faisal said that Pakistan has closed its consulate in Jalalabad due to security concerns and its visa operations have been shifted to Pakistan embassy in Kabul.

In answer to a question, he categorically rejected that Pakistan is considering renegotiating the CPEC with China and said Pakistan is committed to the early completion of this project ‘which would bring investment and economic stability in Pakistan and in the region’.