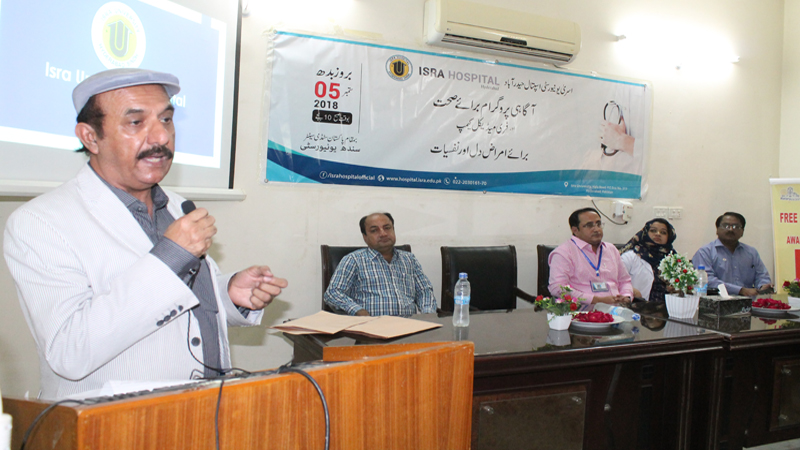 The University of Sindh’s (SU) Pakistan Studies Center (PSC) on Wednesday conducted a health awareness session entitled “We Love Pakistan” to honour the Defence Day of Pakistan in collaboration with the Isra University and Rotary Club Hyderabad.

In this regard, SU’s Vice-Chancellor (VC) Prof Dr Fateh Muhammad Burfat inaugurated a free medical camp in the university’s campus in Jamshoro and lauded efforts of the PSC in organising the event.

“One of the major reasons behind prevalent diseases associated with certain fatal viruses in the region is the lack of awareness amongst the patients and their inadequate access to physicians for proper treatment,” he said.

He paid rich tribute to the martyrs and their families, who laid down their lives for protection of the homeland on Sept 6, and said “Our heroes formed an impenetrable wall of defence for the enemy forces to pass through.”

The VC expressed hope that the medical camp would benefit a large number of patients including students of both universities.

He also emphasised on achieving sustainable ‘self-development’ for social welfare, and termed it as ‘crucial for development and progress of the nation.’

“Otherwise, we can easily lose our emotional and temperamental equilibrium, leading to ‘nasty’ verbal attacks on each other,” he said, adding that positive behaviour could heal all social anomalies including health, physical and mental disorders.

Later, PSC Director Prof Dr Shuja Ahmed Mahesar expressed his gratitude to the managements of the Isra University and Rotary Club Hyderabad for extending their support in organising the event.

He also thanked healthcare officials for examining visitors and students in the medical camp.

Later, certificates of appreciation were awarded to volunteers of the center.