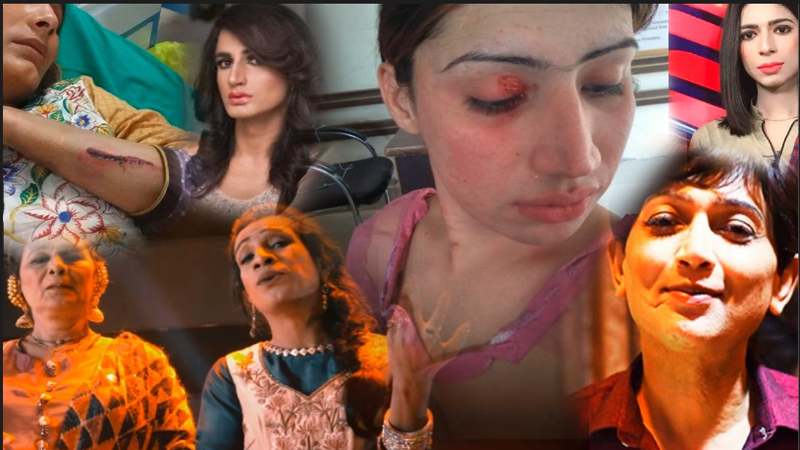 “Give me a chance,” she begged. Her struggle was not for power but only for acceptance.

Nobody likes to get humiliated or disrespected. Nobody likes to beg on streets or dance for money. Nobody likes being rejected by their own family. It is not their fault. It is their fate. We have to accept this fact and their existence.

During the recently concluded general elections, Nadeem Kashish, the founder of the She male Association for Fundamental Rights (Safar), launched her election campaign on her radio show. Athough Kashish lost the election she has made a name for herself by running her campaign with enthusiasm and passion.

Transgender or Khuwajasirasare are people whose sense of personal identity and gender does not match with their sex. They definitely did not choose to be born like that because it is not in our hands to choose our sexual identities. It is all natural and by birth. Wretchedly, our society has zero acceptance for third genders and our attitude towards transgender individuals reflect this mindset. We perceive them only as dancers, sex objects and beggars. Our conservative and the so called elite class looks down upon and derogates them.

It is time to stop marginalising transgender individuals as beggars, dancers and prostitutes and to provide them with platforms that showcase thier talents

Don’t you think that we should have compassion for them? After all they could be born at your house too!

After being rejected by their own families and then by the society, the transgender persons become victims of harassment and violence.

Many times I have witnessed men flirting, passing vulgar comments or setting up rates with transgender individuals at traffic signals.

Recently, an incident was reported of a transgender girl in district Nowshera of Khyber Pakhtunkhwa, who was sexually harassed at an event. after she went to the police to file a complaint, she was referred to a hospital where she was again harassed and forced to strip naked by the hospital staff.

We have also witnessed incidents of physical assault and killings of transgender in recent days. Two transgender women were gang raped the previous year in their own house.

People do not even consider their issues important enough to discuss in official meetings. This is the dilemma of our society and it is this very behavior that has forced them to live in separate communities in extreme poverty.

Considering the immense hurdles and the indifference of policy makers their struggle for equal rights is commendable. We should give them the chance to prove themselves and showcase their talent. Certain transgender individuals have managed to make some progress in this regard, like Maya Zamam, the first Pakistani transgender designer. Hats off to you Maya!

No doubt, she has suffered in this journey but she has proved herself by introducing her first luxury prêt ‘Surkhabi’.

Speaking of giving transgender persons a platform to showcase their talents, Coke Studio recently launched a track sung by two tansgeders, Naghma Gogi and Lucky Khan. Producers Ali Hamza and Zohaid Kazi presented a poem of Faiz Amed Faiz, ‘Hum Dekhenge’ in which Gogi and Khan are given perfectly chosen lines to sing, ‘Khalq-e- Khuda, Jo mai bhi hun aur tum bhi ho’ (Ceation of God that what I am and you are too). This song gives society the poignant meaning message that as creations of the same God we are equal and asks that we accept them like normal human beings. For the first time in Pakistan the transgender community has been given such a huge opportunity and platform.

Recently Punjab AIDS Control Program (PACP) decided to establish an exclusive clinic for transgender in order to reduce stigma attached with HIV. According to the Transgender Persons (protection of rights) Act, transgender persons are allowed to choose their gender, their identity on official documents, ID cards, passport, driving licenses and even right to vote. This act forbids discrimination between transgender at work, public place or in schools.

Sadly, this rejected class of our society is two percent of the population. Try to accept them. They are human too and a part of our society. Accept them and they will prove themselves very beneficial for country, infect they already are!

The writer is a staff member and a recent graduate of Mass Communication. She can be reached at arshiyazahid@hotmail.com and tweets at @Arshiayzahid