* FM Qureshi signals shift in strategic posturing, saying Pakistan no longer 'a darling of the West'
* Mike Pompeo expected to arrive in Islamabad on September 5 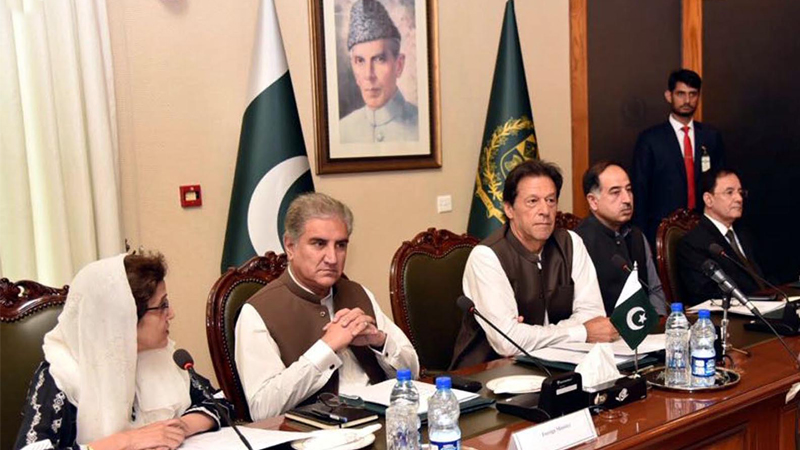 ISLAMABAD: Prime Minister Imran Khan on Friday gave clear guidelines to the Foreign Ministry to uphold the country’s interests and to shape a policy narrative in line with the aspirations of the people of Pakistan.

In his maiden visit to the Ministry, Khan underscored the importance of peace in the region and vowed that his government would do all efforts for the purpose. “We need stability to progress and we need clarity in our objectives at the global level,” the PM remarked during the visit.

Earlier, he was briefed on the country’s relations with neighbours and other major states covering major challenges to be tackled in days to come. Foreign Secretary Tehmina Janjua briefed the PM relations with China, Saudi Arabia, Afghanistan, Iran, the United States and India. The PM was also briefed on the situation in Indian-occupied Kashmir. However, neither the PM nor Foreign Minister Shah Mehmood Qureshi, during his press briefing afterwards, uttered a word on the Indian forces’ atrocities in the IoK.

During the visit, the PM specified his concerns over Pakistan’s inclusion in the grey list of the Financial Actio Taskforce (FATF) and directed the Foreign Office to work out a solution in coordination with other ministries. The PM took exception to the expenditure on foreign tours, directing the FO to immediately ban the use of special aircrafts for visits to conferences. He said that commercial airlines should be used for the purpose.

During his press briefing after Khan’s visit, FM Qureshi shared details of discussions held between the premier and the FO staff.

He maintained that the world had changed from what it used to be [during his earlier stint at the ministry about seven years ago]. In a remark that was a sign of the country’s strategic posturing in days to come, Qureshi said, “Pakistan is no longer the darling of the West. Political and economic centres are shifting eastwards. The world is becoming increasingly multi-polar and is no longer uni-polar. A multi-polar world has demands that are different from a uni-polar world.”

On the issue of the telephonic exchange between US Secretary of State Mike Pompeo, who is is expected to visit Pakistan in the first week of September, and PM Khan, the FM said that the statement issued by the US after the call was not based on reality.

Foreign Minister said, “We want good relations with the United States based on mutual respect.”

On Afghanistan, Qureshi said peace in the country was a perquisite for peace in the entire region and reiterated that Pakistan wanted a peaceful Afghanistan. He said regional peace was a top priority of our foreign policy, adding that positive indications had been received from Afghan President Ashraf Ghani in this regard. “The Foreign Office has been directed to do the follow up work.”

Qureshi said that the PM had clarified that the country’s attitude on the foreign policy front would not be apologetic. “We will safeguard our national interests.” On ties with eastern neighbor India, Qureshi referred to the letter sent by Indian Prime Minister Narendera Modi and said that guidelines were issued to the FO to start the dialogue since ‘Indian authorities appeared willing to talk’.

He said that both countries would have to look into the prospects of moving forward for the resolution of their long-standing disputes. “Bilateral dialogue is the only way forward to resolve all outstanding issues.”

On Pakistan-Iran relations, Qureshi said that Pakistan was desirous of a peace and stability on its border with Iran. He said that his counterpart in Iran had expressed desires to visit Pakistan. “Pakistan will warmly welcome him.”

The FO said that his Chinese counterpart had also shown willingness to visit Pakistan very soon. He hoped that the visit would further expand the existing strategic relationship between the two countries, including completion of China Pakistan Economic Corridor projects. “Pak-China friendship is unprecedented and this will flourish further in the days to come,” he said.

The FM referred to the South Asian Association for Regional Cooperation (SAARC) as an important forum for promotion of peace and regional cooperation. Qureshi also highlighted key challenges being faced by Muslim world, including rising Islamophobia in western states.