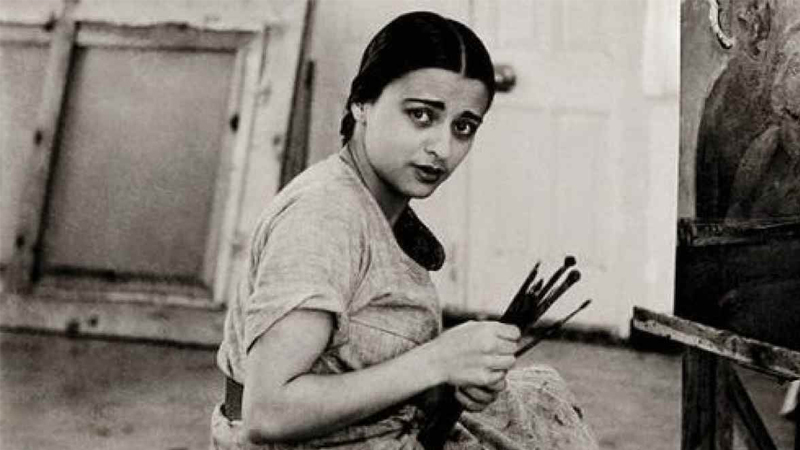 Sonal Khullar, an art historian based in the US, discusses art, artists and culture in South Asia today.

How did this trip to Lahore change your perception of Amrita Shergill?

She is a really significant artist and in some ways has been overlooked in the art historical genealogy. So in the last twenty years, there have been a number of books and articles that celebrate the rise of modern Indian art. There are books by Tapati Guha-Thakurta and Yashodhara Dalmia from the early 1990s. And then a major exhibition called “Midnight to the Boom” was held in the US. There is a new show called “The Progressive Revolution” opening at the Asia Society of New York. None of these shows focus on Shergill. They begin the modern art with the Bombay Progressive Artists Group or a group of artists in Bengal.

What are the time periods of these two artists’ groups?

The Bengal one is before Shergill and the Bombay one is after Shergill. But the Shergill is actively responding to the artists in Bengal. This is in her writing, this is in her work and the Bombay artists are indebted to Shergill. Whether it is MF Husain or FN Souza or other artists who are not associated with the progressives will write about or paint their debt to Amrita Shergill. And strangely we have just raised her from our history of art. A lot of people write about her as if she was standing above, and so what I have done in my book I have written her into a history of Indian art and a history of modernism. And to say that she was very much part of a national conversation and dialogue about what art should be.

How do you feel the Pakistani art scene differs from the India one? For example the Lahore art scene from the Delhi one.

You know I cannot speak at all about Karachi because I have not been there. I know the works of the artists but in my opinion to be able to speak about an art scene you have to know the institutions, infrastructures, which is to say how art is being taught. What is the relationship between the institution and the street? The gallery and the factory.

I feel I need to do more work. The art scene in Lahore seems like really dynamic and engaged audience of art and even artists. I gave a lecture at Beaconhouse National University and it was a packed auditorium. The audience was extremely curious and I would say ambitious in their work and ideas.

I feel like I have had very few tours of the art scene as yet. It seems small. But the Delhi art scene is also small in a way. Maybe there are many art scenes in Delhi. I mean there are younger artists that are working from outside the city, the peripheries of the city than the more established artists. There are a lot of different kinds of works being produced. Although one of the things I pointed out in my lecture was that there is only a certain kind of artists that tend to be shown abroad whether that is abroad in the west or in Pakistan and are discussed and whose work is reproduced.

I think there are many connections in art practices between India and Pakistan. The artists are developing what I described in the article as a ‘critical approach to the region’. They are thinking about the ways in which security cultures, in which shopping norms, real estate development, militarisation, occupation, gender, sexuality and patriarchy play out

What do you think about the contemporary artists in India?

Often by the time I have heard about an artist, it is typically very late to be discovered. I do think Navjot Altaf is one but he is not new.

Is there any connection in the art practices between India and Pakistan?

The article I presented in LUMS dealt with this question. I think there are many connections in art practices in India and Pakistan. I think the artists are developing what I described in the article as a “critical approach to the region.” They are thinking about the ways in which security cultures, in which shopping norms, real estate development, militarisation, occupation, gender, sexuality, patriarchy play out. I spoke specifically about gender and sexuality as an important axis of critique. So that these issues, the ways in which they play out in the context of South Asia are shared. We can see a kind of emergent critique. Vocabularies are different. I think people are using different languages of art but you can see a connection in practices. The exhibition that I wrote about in the article was held at 24 Jor Bagh in Delhi and displayed the works of Indian and Pakistani artists side by side. The exibition was curated by Salima Hashmi and was a really good example of art exchanges. Imran Ahmad Khan’s work was juxtaposed by Anita Dube’s. I think both works are speaking to the journeys through the city, everyday life, the culture of violence that’s common to cities in India and Pakistan. Artists Naiza Khan and Bani Abidi have written and spoken about how everyday life in South Asia is fraught with violence and that artists have to resort to guerrilla tactics. So I think that’s actually an interesting connection as well. 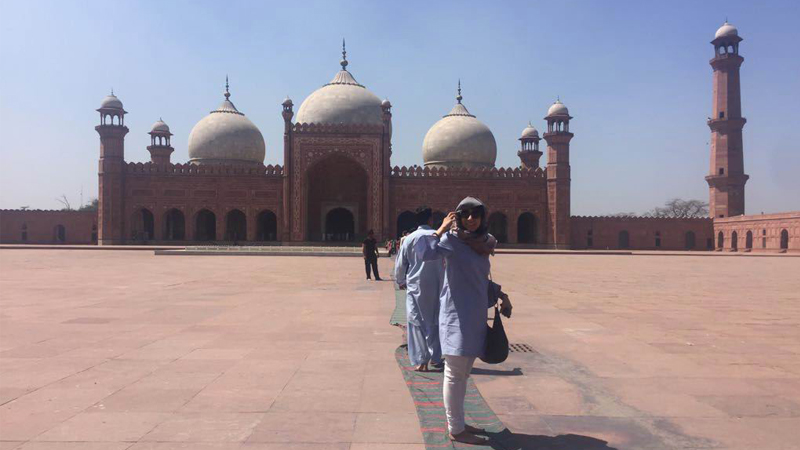 Do you think there is enough collaboration between Indian and Pakistani artists?

You know, on one hand, yes, on the other hand, no. I spoke about this at the talk at LUMS. Over the past 35 years, we have seen the emergence of a set of artistic networks, philanthropic organisations, and foundations, and art exhibitions like the Cochin Biennale or the Dhaka Art Summit, Lahore Biennale or the Karachi Biennale bringing together artists from the region. This is happening despite and perhaps because of greater difficulty across borders and even traveling within borders of particular nation-states. The security cultures and political relationships between the nation-states in South Asia is deteriorating. So that exchanges and dialogue that were possible 20 or 25 years ago – the space for that seems to be more and more limited. So while I see a lot of these initiatives growing, on one hand, I also see the possibility for artists to know each other or to travel to see work and talk with each other is shrinking in some ways. It’s very difficult to get a visa and when I was at Beaconhouse I actually said to artists that I was a little bit surprised at the Biennale. Not surprised but shocked. I hadn’t expected to make that translation that artists like Navjot will not be well-known in this context. They are important figures in India. And what I heard at Beaconhouse today was very interesting. They said because of the rise of the internet because Pakistani artists have fewer opportunities to travel abroad and there are fewer visitors to Pakistan – the internet has become a great source for learning about art practices elsewhere. But that previously, this is what a senior artist said, the international art world was forged through links with Indian artists. And now this decreased because of the internet.

They said they give their work in Indian art galleries?

That is still going on. In terms of who do you follow as a student if you want to learn about work. Some artists are at a level where they can manage an exchange in Paris or New York or Karachi or Delhi. Right, so you meet at a third location. So like Pakistani artists, I have met in London, Dhaka, Sri Lanka. But there are people who are less established, who are wanting to learn about the practice, wanting to know about an exchange. I think when I have done research in Sri Lanka, especially in the northern province which is Tamil majority. Artists would tell me about coming of age in the 80s and actively seeking connections with Tamil artists and intellectuals in India. Reading books and catalogs. I am not saying that culture has disappeared. But I think what I was hearing this afternoon is that the internet has changed the way information circulates so that there are not so limited to the physical book to following the artist who is proximate or close by. It has changed the notions of distance and proximity.

How can art students adopt a career like yours? How can they become an art historian?

Read and write. I think it is a wonderful idea to want to write, to want to study the history of art, to have an opportunity to write particularly on art. It is a very different kind of career than being a practicing artist but it is not unknown but it is not common either. People like Iftikhar Dadi are very uncommon which means they are art historians and also practicing art. 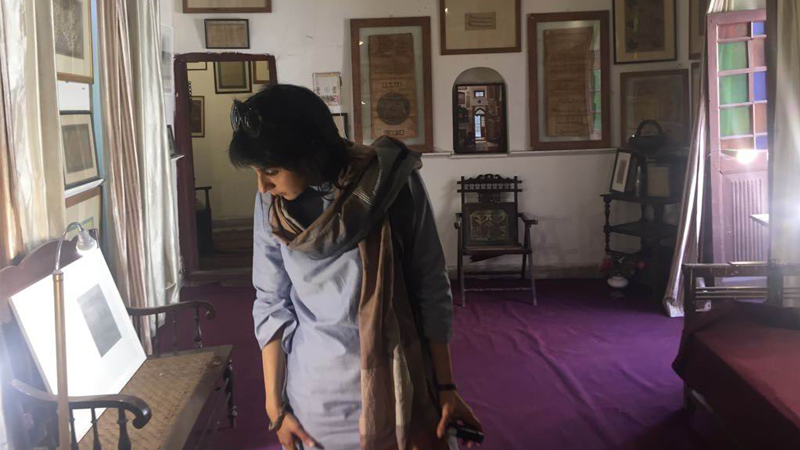 Are you a practicing artist?

I am not and it is very uncommon. At one time it was very common in India that artists would meet each other and consider themselves art historian. A senior artist like Ghuman Muhammad Shiekh who write beautifully. K.G. Subramanyan is another artist about whom I write in my book. He died in 2016. And he wrote beautifully about art. Many artists used to write. It is a different profession and a different commitment to be an art historian. Being a critic and art historian are not the same things. I have been hearing this demand in India, more loudly and clearly in the past five years, that we need more art writers. I have done tons of writers. Artists, critics, historians would say we need writers. Not enough people are writing about art. You need a critical reflection in the mirror and a critical reflection of the past for it.

Ammara Ahmad is based in Lahore and tweets as @ammarawrites. Her work is available on www.ammaraahmad.com