To supplement Independence Day celebrations, the Daily Times will highlight, all of August, the individuals who continue to make Pakistan proud. Our 18th interview is with the acclaimed mountaineer Saad Mohamed 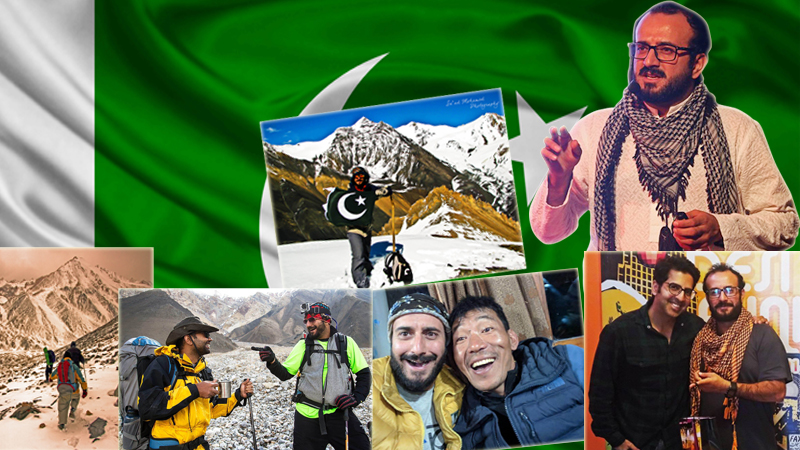 Tell us about your foray into mountaineering and photo/videographing. How did it all begin for you?

I was lucky to be part of a family that travelled a lot. And I get my itchy feet from my father. For me becoming a mountaineer has been a very gradual progression. I started trekking in 1998 and when in 2003, I went to Rakaposhi base camp I did not have a camera! The trek is very rewarding in terms of scenery, availability of water and greenery and in one expedition, you get to see both Rakaposhi and Deeran Peak, which are both 7,000 metre Karakorams. I have no pictures from that trek and that is my only regret. After this expedition, I made it a point to buy a camera and have gradually upgraded to a point where I can shoot things as varied as a time lapse to a star-scape to an adrenaline pumping action sequence on the highest mountains on the planet.

You have been an inspirational speaker at many important events. What do you aim on conveying to your audience?

As one of the most known mountaineers on social media in Pakistan and a seasoned motivational speaker, it has been an honour to speak at TEDx Lahore University of Management Sciences, TEDx Kinnaird College and TEDx Punjab University. I have also spoken at various schools, universities and public events and have recently completed a Master Trainer certification from the School of Leadership. My talks and trainings are about motivating through inspirational personal anecdotes from the high mountains and cover a wide array of topics including but not limited to teamwork, leadership and decision-making, planning and logistics, communication and presentation skills, personal branding and high altitude photo/videography.

‘Mountaineering gives me an immense sense of achievement and self-satisfaction and a feeling of nirvana and solitude that cannot be found elsewhere, not even in meditation’

What are you currently working on? What according to you has been your biggest achievement so far?

Before I went to Nepal to scale Mount Everest, I started my YouTube channel. The idea was to upload short webisodes of my expeditions and journeys. Short videos are one of the most powerful storytelling medium nowadays. The highlight of my channel is #aPakistaniOnEverest, which is a five episode web series that entails what went down during my attempt to scale the tallest peak on the planet in 2017. I have a winter expedition series in the pipeline and footage from my latest expedition to Gasherbrum will also be uploaded in the next few months. As for climbing, I intend to do a winter expedition to a 6,000 metre unclimbed peak and in summer of 2019, I intend to return to the 8,000 metre Karakoram in Pakistan. K2 and a second attempt of Everest are still a few years down the road.

I keep saying this that despite having five of the tallest peaks on the planet, we haven’t produced enough mountaineers because of the fact that the mountains are too far away from big cities but this year has been super exceptional with respect to Pakistani mountaineers and local expeditions. There were two Pakistani mountaineers, including myself, on Gasherbrums, two on Broad Peak, six made it to the top of Spantik, two were doing big wall exploration in the remote Nanghma Valley, eight climbers made it to the top of the highest peak in Naran, three siblings and an 11 year old boy from Lahore climbed a 6,000 meter peak in Shimshal. My vision for Pakistan is to inculcate a culture where more and more people have access to adventure sports. Why just stop at rock climbing and mountaineering? Why not have facilities that enable one to indulge in wing-suite flying? I take pride in the knowledge that when as a Pakistani you are climbing locally or abroad or with an international expedition, like any other athlete from any other sport you are representing Pakistan. For me, the meaning of being a Pakistani is to be a goodwill ambassador of the country and the sport at all forums available to me.

Tell us about a memorable moment in your mountaineering career.

While climbing Mt Everest in Nepal last year, I came across many laddered crevasse crossings between the Base Camp and Camp I. The first time you go across an aluminum ladder while wearing crampons under your bulky climbing shoes, it gives you the jitters. The ladders are secured to the edges with a few thin ropes and tend to wiggle and wobble with every step. The jagged metal alloy crampons also do not help in this particular situation and can sometimes get stuck in the rungs of the ladder. Going across the first few times are nerve-wrecking but after that you start having fun.

Motivation while climbing is a very complex thing to explain. Trekkers, mountaineers and travelers wait for months on end to be doing what they like doing best. Mountaineering gives me an immense sense of achievement and self-satisfaction and a feeling of nirvana and solitude that cannot be found elsewhere, not even in meditation. Plus you really can’t beat the awesome views that you get from up there.

I played club cricket from a very young age and as an all-rounder myself I idealised Imran Khan, Wasim Akram and Hansie Cronje. I was also a specialist fielder and Jonty Rhodes was my ultimate inspiration. I have also played squash since my school years and was the top seed at my club and Jahangir Khan has been my hero. He is the ultimate representation of achieving greatness against all odds. I take immense pride to have a mentor like Abdul Jabbar Bhatti – the oldest Pakistani ever to climb Everest. I have mad respect for Nazir Sabir, Shah Khan and Sher Khan and Samina Baig and Sadia Sharjeel have been a constant source of inspiration. Alex Hannold, Kilian Jornet and Ueli Steck’s unique climbing styles have also fascinated me immensely. Reinhold Messner, Herman Bull and Hans Kammerlander are the sort of people I want to be remembered like. I am also a huge fan of Mahira Khan. She is the personification of resilience and perseverance.

Saad Mohamed is one of the most popular and hugely successful mountaineers in Pakistan. From trekking Rakaposhi base camp and Deeran Peak to Mount Everest in Nepal, the young and energetic mountaineer has done it all.

Mohamed is also a seasoned motivational speaker. He has spoken at TEDx LUMS, TEDx Kinnaird College and TEDx PU. He has also spoken at various schools, universities and public events and has recently completed a Master Trainer certification from the School of Leadership. His talks and trainings are about motivating through inspirational personal anecdotes from the high mountains and cover a wide array of topics including but not limited to teamwork, leadership and decision-making, planning and logistics, communication and presentation skills, personal branding and high altitude photo/videography.

Mohamed has his YouTube channel, in which he uploads short webisodes of his expeditions and journeys. The highlight of his channel is #aPakistaniOnEverest, which is a five episode web series that entails what went down during his attempt to scale the tallest peak on the planet in 2017. He has a winter expedition series in the pipeline and footage from his latest expedition to Gasherbrum will be uploaded soon.