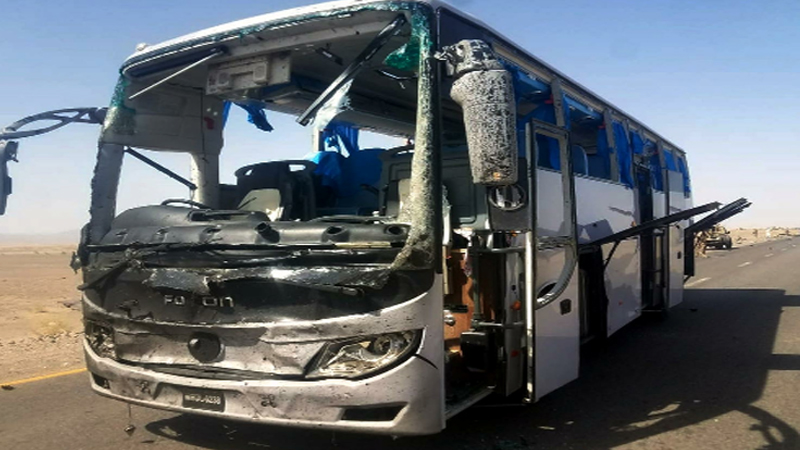 At least six people, including three Chinese nationals, were injured in a suicide blast near a bus carrying employees of the Saindak copper-gold project in Dalbandin area of Chaghi district on Saturday.

Quetta Divisional Commissioner Hashim Ghilzai confirmed that a suicide bomber detonated explosives near the bus. “Three foreigners and three FC personnel were injured in the blast,” he said.

The injured were shifted to a nearby hospital for medical treatment.

Security forces have sealed off the area and investigations into the incident are under way.

The Baloch Liberation Army has claimed responsibility of the attack. “The attack in Dalbandin on bus carrying Chinese Engineers was carried out by a fidayeen member of Baloch Liberation Army. Rehaan Baloch, a member of BLA’s Majeed Birgade, detonated his explosives laden vehicle near the convoy of Chinese engineers,” a statement issued by the defunct organization said. “We have time and again warned that plundering Baloch resources is a moral and legal crime because Baloch nation is currently a victim of exploitation. Our attacks for the protection of our natural resources and restoration of a secular Baloch nation state will further intensify,” it added.

Foreign Office Spokesman Dr Faisal strongly condemned the terrorist attack on Chinese convoy and said all of the injured are stable and being treated. “Pakistan remains unflinchingly undeterred in the face of such dastardly terrorist acts,” he asserted.

In a statement issued to the media, Chinese embassy in Islamabad strongly condemned the attack in Balochistan. “The embassy and consulates general of China in Pakistan strongly condemn the violent attack in Balochistan, and express sincere sympathy to the injured from both the countries,” the statement said. “The Chinese government has always attached great importance to the security of the Chinese companies and citizens in Pakistan. The embassy of China in Pakistan and consulate general of China in Karachi activated the emergency response mechanism immediately after the attack and maintained close communication with the Pakistani side,” it added. “The Chinese side has requested the relevant Pakistani departments to investigate the incident, bring the perpetrators to justice and take further effective measures to ensure the security of the Chinese institutions and citizens in Pakistan,” it concluded.

Saindak copper-gold mine is located near Saindak town in Chaghi district of Balochistan. The discovery of copper deposits at Saindak was made in the 1970s in collaboration with a Chinese engineering firm.