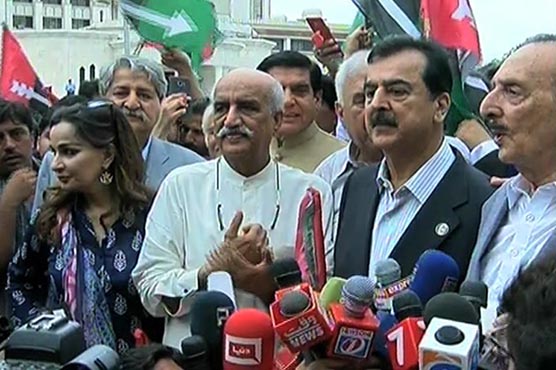 ISLAMABAD: Opposition parties are protesting against the alleged rigging in the general elections outside the offices of the Election Commission of Pakistan (ECP) today.

The slogans chanted outside the ECP offices were of “death to ECP” and “fake elections.”

Furthermore, the workers of Jamiat e Ulema Islam-Fazl ur Rehman (JUI-F) have taken to the streets all over Balochistan and Khyber Pakhtunkhwa (KPK).

The Indus Highway and the Quetta-Karachi Highway among others have been closed because of the protests.

PPP Senator Sherry Rehman once more demanded the resignation of the chief election commissioner which the ECP had denied earlier.

Former Prime Mister Yousaf Raza Gillani said that these elections are marred with the worst rigging in Pakistan’s history and all political parties reject these results.

PPP’s  Khursheed Shah said the opposition is giving Imran Khan a chance to solve the country’s problems in “100 days” which he has always claimed and that the opposition will raise all issues in the parliament.

PML-N’s Raja Zafar ul Haq said that the mandate of the people was stolen and that the ECP failed miserably. Former interior minister also reiterated the same sentiment and said that they were being deprived of their legal right of recounting.

An elaborate security plan has been drafted in light of the protests in the capital. The red zone has been blocked with containers and no one other than parliamentarians is allowed to protest outside the ECP office.