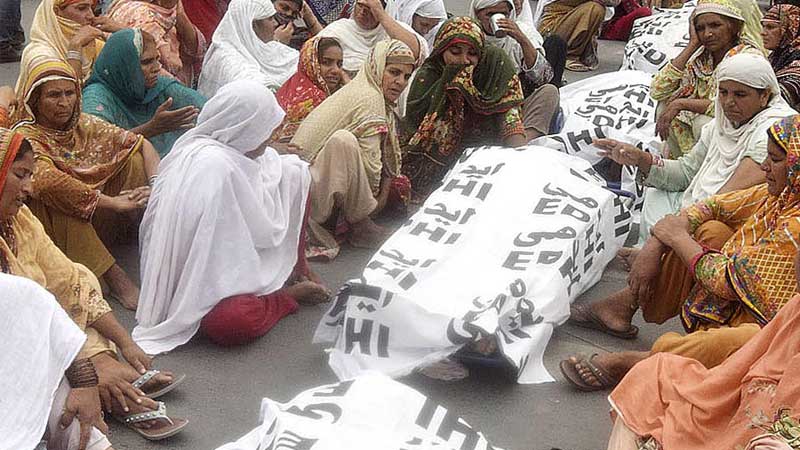 LAHORE: At least five people of a family including three brothers were gunned down in Burki Police Station area on Tuesday.

The victims were identified as Bashir, Qurban Ali, Abdul Rasheed, Tanveer and Qadir Ali, residents of Pulharwan Village, Burki area. As per details, all the victims belonging to Lathya group, tended to their fields when a group, with whom they shared enmity with, Kotha Wala group, that included four to five armed attackers, awaiting them near their fields.

Upon being informed about firing, locals reached the spot where they found five people dead. The news of tragic incident spread in the village as well as its surrounding areas like fire in the jungle. The family members, relatives and number of locals also reached the spot, cursing the security personnel for their negligence.

A police contingent and rescuers also reached the spot and cordoned off the area. Some locals said that the clash had started between these two groups over a land dispute. They added that four people had been murdered on the same issue, belonging to Lathya group, about two months back.

The police arrived and sent relevant pieces of evidence for a more comprehensive investigation. The authorities are confident that they will apprehend the murderers soon.

The family members claimed that police supported Kotha Wala group as police did not arrest the accused persons who injured their people two months back. The accused party threatened them several times. The police high ups also reached the spot and started negotiations with deceased’s family members and assured them to provide justice soon.

In a horrid reaction, the murdered boys’ family members and relatives set the houses of accused party on fire. In this regard, police, rescuers and fire brigade reached the spot and began a rescue operation. The police also evacuated the nearby houses to prevent any casualties.

The deceased’s family members decided to reach The Mall in front of Punjab Assembly along with dead bodies to stage a protest.

The traffic remained blocked owing to the protest on The Mall and its surrounding areas for several hours. Traffic wardens immediately diverted traffic on different roads to maintain the traffic flow. Deputy Inspector General (DIG) Operations Shahzad Akbar and other officers reached the protest venue to negotiate with the family members. The protesters peacefully dispersed afterwards and removed the dead bodies to the city mortuary after the assurance of DIG Operations to provide them justice as per law and early arrest of culprits involved in this tragic incident.

DIG Operations Shahzad Akbar has ordered Superintendent Police Cantt to conduct a speedy and thorough investigation to bring justice to the families.

It is pertinent to mention that so far, none of the accused have been arrested.