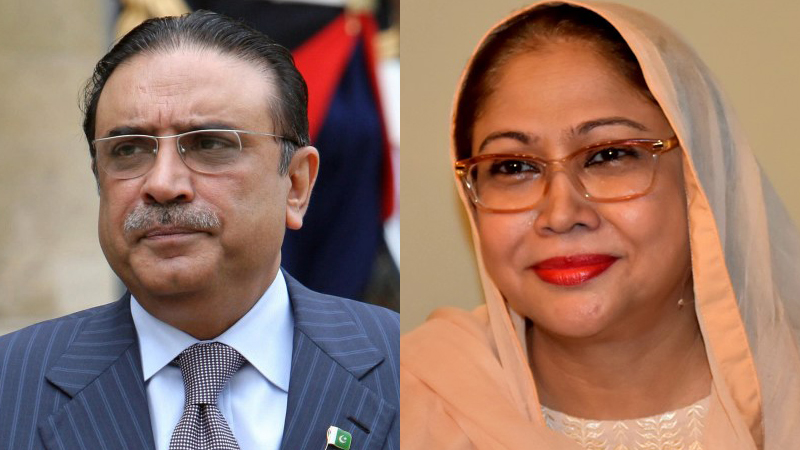 ISLAMABAD: The Chief Justice of Pakistan on Monday hinted that a new Joint Investigation Team on the pattern of the one formed in the Panama Papers leaks could be formed to probe money laundering allegations against PPP co-chairman Asif Ali Zardari and his sister Faryal Talpur.

He made the comment during the hearing of a suo motu case concerning an investigation into fictitious transactions worth billions conducted through ‘benami’ accounts in several mainstream banks. Zardari and his sister Faryal Talpur are among the 32 accused in the case. Zardari’s close aide Hussain Lawai was arrested in connection with the probe last month.

Over 20 ‘benami’ accounts were opened in 2013, 2014 and 2015 and were reportedly used to make transactions worth billions of rupees. Investigators suspect that the laundered money had been gathered through illegal means like kickbacks, commissions and bribes.

During the hearing on Monday, Talpur’s counsel Farooq H. Naik raised his concerns over the conduct of the Federal Investigation Agency’s (FIA) team probing the case. He maintained that the agency was defaming his clients and others, adding that by declaring absconders in the run up to the elections, the FIA had engaged in pre-poll rigging.

CJP Nisar assured the counsel that the court would not support the FIA probe if the agency was accusing people wrongly. He, however, noted that if money laundering was proven, then the court would not spare anyone. “If the allegations are not proven, we will issue a certificate of honesty,” CJP Nisar said.

In his remarks, Justice Umar Ata Bandial stated that the amount present in the ‘fake’ accounts was black money acquired through theft.

Earlier, FIA director general Bashir Memon told the court that the Financial Monitoring Unit had submitted a report regarding the 29 ‘benami’ accounts, and that a first information report had been registered in the case. He said Rs20.082 billion had been transferred from the accounts of the Omni Group of Companies whose head was not present in the court on Monday. The court summoned Omni Group of Companies’ Anwar Majeed, a close aide of Zardari, and his family on next Monday, August 13, in connection with the fake bank accounts case.

Meanwhile, a former employee of one of the banks under investigation told the Supreme Court on Monday that the police were harassing her and her family in connection with the probe. After hearing her allegations, the chief justice remarked that the court warned the FIA DG that if the agency registered a single false case against anyone, the court would take action against it.

The chief justice also ordered the Sindh Police IG Amjad Saleem to submit a report on the harassment incident in two days.

The case was adjourned until next Monday.