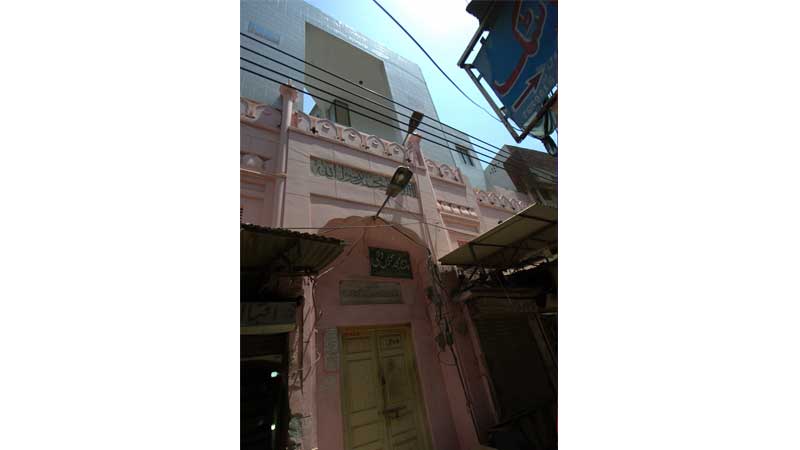 According to sources, the mosque has immense historic importance and was one of the important mosques in history but due to sheer neglect and lack of ownership by any government department whether Archaeology, Auqaf or WCLA, its historic fabric is being changed by the locals. Sources added that the locals of the area gather funds for its maintenance and thus with the passage of time, the mosque is getting renovated with modern material and losing its original value in terms of architecture. Sources lamented that there are several other mosques inside Walled City which have high architectural and historic importance but are not being owned by any government department.

Further the sources were of the opinion that the mosque should have been owned by the Archaeology Department, Auqaf or now WCLA so that it had an in charge or administrator for the repairs according to its structure and heritage importance. Sources further added that there was no check on the encroachments which were increasing with each passing day thus hiding the façade of the mosque. Sources said that the mosque is not well kept and needs proper hygienic premises to perform ablution.

According to the locals of the area in Papar Mandi and Shah Almi, the mosque was functional for all five prayers but no tourists were allowed inside because the present in charge of the mosque was afraid of exposing the changes made to its structure.

Muhammad Saeed, a local tourist guide of Walled City, said that tourists were curious to know about this mosque and visit it but the Imam had always been reluctant to open up the mosque for the tourist which was embarrassing at times for him.

About the history of the mosque of Moran Sarkar, Muhammad Saeed, while talking exclusively to Daily Times said, “She was the beloved of Sher-e-Punjab Maharaja Ranjit Singh and later became his wife. The coin of Moran was also minted as the currency of that time. The court’s decisions were not made in the Palace of Ranjit Singh, but in the drawing room of Moran Sarkar. Soon Moran Sarkar became a window to the common people who often discussed their problems with her. She was known for her charitable acts and in bringing Maharaja’s attention to many problems.”

Saeed further added an interesting fact, “In real life, she was a dancer who performed in the court of Ranjeet Singh. Through his marriage to Moran, the Maharaja wanted to support the community of tawaifs who were socially unacceptable. The Maharaja at Moran’s request, built a mosque called Masjid-e-Tawaifan in 1824, which was again renamed in 1998 as Mai Moran Masjid or Moran Sarkar Masjid in Lahore. The red coloured mosque was once the symbol of passion and love of Moran Sarkar for the religion of Islam and it showed the standards of religious harmony.”

A historian and owner of Faqir Khana Museum in Bhatti Gate Lahore, Faqir Saifuddin was of the opinion that the mosque needed immediate attention and conservation as it was built by an important Sikh personality of Punjab.

“We should not neglect our heritage and preserve it for the generations ahead. If heritage is left unpreserved, what will we showcase to the world and our children in terms of heritage and culture?” Faqir Saifuddin said, also while talking exclusively to Daily Times.

A photographer and culture enthusiast running a photography and culture club in Lahore Asif Sherazi was of the opinion that such heritage sites should be opened for the public and photographers so that they are projected among the world.

“Such sites are a symbol of religious harmony and these should be shown to the world to erase the image which Pakistan has developed presently,” Asif Sherazi said.

WCLA Conservation & Planning Director Najamus Saqib said that WCLA had not worked out on any plans for conserving this mosque.

“We are presently working in other areas of Walled City like Bhatti, Taxali and Lahore Fort. We have not started any planning on Moran Sarkar Masjid but we will surely be working to preserve such pieces of heritage in near future,” Najamus Saqib told Daily Times.