Revival of theatre necessary for a richer culture 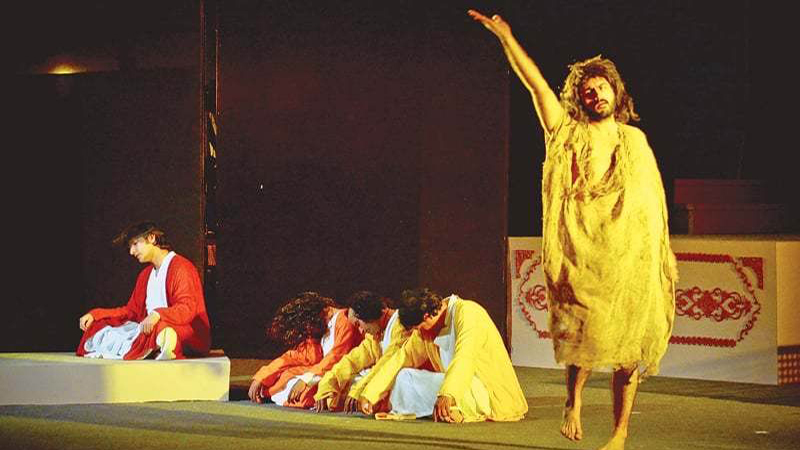 In an epoch of film, TV and cinema; theatre has played a central role in educating and moulding dispositions as it is one of the oldest form of entertainment.

In prehistoric times; when human beings were struggling to form languages, physical actions were used to communicate instead of words. Before it was categorised as an art form, theatre, was a necessity for every developing society. In every age through cultural theatrical performances, human history has been played on wonderfully, from religious persuasions to heroic sacrifices, from villainous instigations to political brain-washings, from comedies to tragedies, from social satires to celebrations of the living. Theatre is a place where imagination thrives, scholastic skills are enhanced and the procedures of self-articulation are taught in a seemingly entertaining way.

However, in current times we see that the rise of electronic media has abducted the intellectual faculties of modern human beings. In the sixties, introduction to television and cinema marginalised theatre and later on, partial religious manipulations in political regimes caused further harm to this art form in the country.

Nevertheless, the few liberated people who were aware of its worth kept struggling to keep it alive but unfortunately due to a number of misconceptions, theatre could not retain its older position of mainstream entertainment.

Theatre as a study and as an art form is a necessity of current times because it facilitates both the performers and the audience in several different ways. For instance, in the matter of expectancy, theatre has a higher degree than cinema. Both the theatre audience and performers are more alert and conscious because anything can go wrong as opposed to cinemas, where the movies go through several edits.

On the other hand, enactments on theatre do not carry any back up plans. If anything goes wrong it spoils the overall impact of the performance. Furthermore, nothing is dubbed or sabotaged by camera tricks thus; the performers make a lot of strenuous efforts in their rehearsing period. Every moment on stage gives the performer a liberty to change the situation according to the expectations of the audience. So often it is noticed that performers turn playful in the final enactments of a play. Even those who are introverts by nature turn out to be enthusiastic orators after getting a positive response from the audience.

Role playing in itself plays a vital part in enhancing the imagination of the participants. The onlookers get curious to see how the new person will play his/her respective role. Whether it is for the first time or whether they have seen so many others play the same role before, they cannot deny the fact that each time it seems different yet equally unique; good or bad certainly does not matter as long as imagination was at work. As for the performers, playing a different role gives them an opportunity to shed off the burden of their identity for some time. At some point, everyone gets tired of playing a role which was given to them since childhood. Performance gives them a chance to come out of the box and get into someone else’s shoes for a certain time period.

In my case, these enactments are an essential part of the course I teach. Once I made the shyest girl of the class to play the role of an eccentric doctor. After weak protests, she decided to play the role and I must say she played it splendidly. Later on I saw her transforming into a prominent student. She became one of those who go out to represent the institutions they belong to. It was evident that the girl managed to tear that self-imposed barrier and enjoyed being someone else. By experiencing the other side, she became something far superior than her true self. She could no longer fit into the old box. Therefore, she redefined her character as a better and dignified one. In similar cases, many non-serious maniacs while playing serious roles transform phenomenally in their real lives because self-reflection is an integral part of the theatre performances.

Theatre brings people closer to each other. Even the crudest people soften while creating something artful. They also learn to share ideas. Placing and utilising the limited material for props and decorations teaches us to be more inventive. Mindful societies use theatre as a necessary tool to invest in cultural and moral values for their upcoming generations and save them from running astray.

In Pakistan, theatre has gone through several transitions and eventually it has met its gradual downfall due to the ignorant authorities. We do not stop watching movies if we come across a bad movie once. Similarly, we do not stop reading a book if one page of the book was not good enough! I wonder why people stop valuing theatre if they see just one group playing in an unsophisticated manner. That particular group certainly does not represent the whole concept of theatre.

So hereby mentioning the unavoidable advantages of the theatre as an essentiality, I reiterate my point that it should be institutionalised properly. Our younger generation needs to be educated efficiently. Instead of becoming a part of dharma politics and listening to goons speaking in abusive language and imparting faulty knowledge, our youngsters deserve proper entertainment that educates them within the vicinity of ethics.

The writer is a lecturer at University of the Punjab