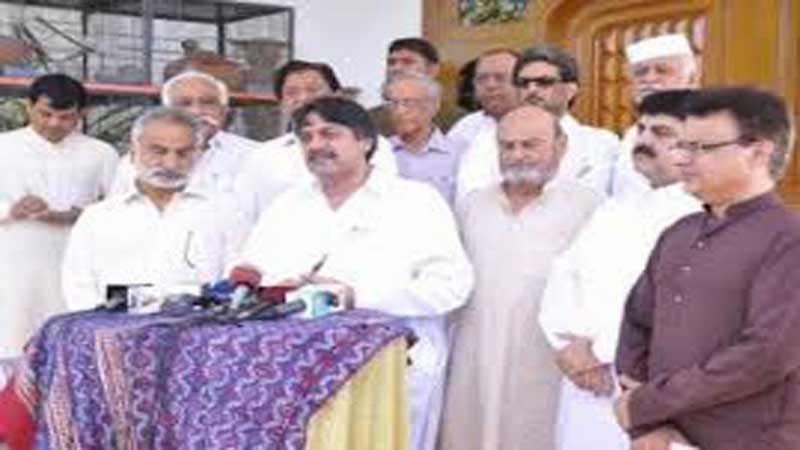 Rejecting the results of the general elections, the Grand Democratic Alliance (GDA) has demanded a re-election in Sindh.

Addressing a press conference at Karachi Press Club, GDA leader Dr Fehmida Mirza, former speaker of the National Assembly (NA) and an MNA-elect from Badin, claimed that three state institutions including the Election Commission of Pakistan (ECP) had lost their credibility after the unfair electoral process on July 25.

She said that massive malpractices were reported on the election day from across the country, adding that the ECP was responsible for holding free and fair elections but it failed to do so.

“The ECP has not only openly violated the directives of the Supreme Court but it has also turned a deaf ear to the objections raised by candidates during the polling process,” she lamented.

“Votes cast for the GDA were thrown away into the gutters and on rubbish and were even burnt in places,” she said, alleging that the Pakistan Peoples Party was also involved in foul play against the Mirza family.

“Our opponents spent billions of rupees to smear our candidates and our polling agents were manhandled and expelled from polling stations in several constituencies in the province,” she said, adding that they had expected that general elections would be held in a free and fair environment but the pre-poll rigging by state institutions prevented the possibility.

She appealed the Supreme Court to take notice of the engineered general elections, insisting that footages of the close circuit television (CCTV) cameras should be examined in the inquiry.

Zulfiqar Mirza, former Sindh Home Minister, also spoke on the occasion. He claimed that elections in Badin were rigged, and different tactics inlcuding harassment and monetary incentives were used to lure away GDA voters. “We were contesting against the Zardari group,” he said.

Mirza said that the PPP turned a blind eye to rigging in Badin and only raised the issue when its own chairman, Bilawal Bhutto, was unable to receive the result of polls in his constituencies.

Speaking on the occasion, Syed Ghous Ali Shah, former Sindh Chief Minister, said, “I am in politics since the last 50 years, and I can speak with experience that the general elections of 2018 were the worst elections in Pakistan’s history in terms of the scale of rigging.” He alleged that [GDA] voters and candidates were targeted by security personnel and the ECP failed to take any action on their pleas. Meanwhile, he also congratulated PTI chairman Imran Khan on his election victory.

Referring to the press talk of Election Commission secretary Yaqoob Babar, GDA leader Sardar Raheem said it seemed that he was a contender in the election, and not an impartial election administrator.

He announed that the first round of the GDA’s protest against rigging would begin on Friday.